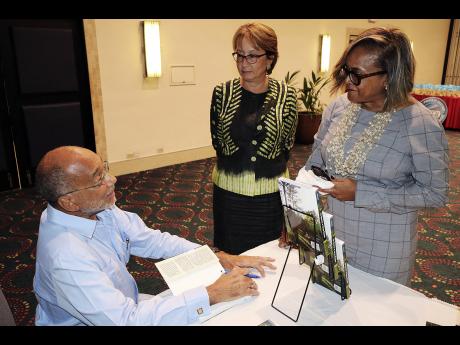 After retiring as chief executive officer of the GraceKennedy Group in 2011, it was his successor, Donald Wehby, who suggested to Douglas Orane that he write a book encapsulating the many speeches he had delivered during an illustrious career with the Jamaica-based conglomerate.

Orane told the annual Christmas members' luncheon that while he had never given thought to doing anything of the sort, the idea soon caught on with him. His research turned up more than 200 speeches, which have been incorporated with photographs, which the author describes as "subliminally autobiographic". One of the photographs is of a four-year-old Douglas with his parents.

He is hopeful that the book, The Business of Nation Building will inspire others to rise beyond their inhibitions and other limitations.

"Anybody can do what I did. I was just this little midget living off Hagley Park Road, so shy I wouldn't speak to anybody, and yet I was able to motivate myself to do what I've done," he told the audience at the Jamaica Pegasus hotel, New Kingston.

A fun book covering 17 topics including corporate governance, entrepreneurship, women in Jamaica, and the Diaspora, Orane is especially heartened by the response from the youth.

"The one (chapter) that young people like the most is Entrepreneurship. That's the first thing they turn to, so I'm encouraging each one of you to buy five copies. Keep one for yourselves and give four to young people, and if you don't know any young people, give to the library of your alma mater," he appealed to business owners and operators.

Orane served as president of the Private Sector Organisation of Jamaica from 1992-94.