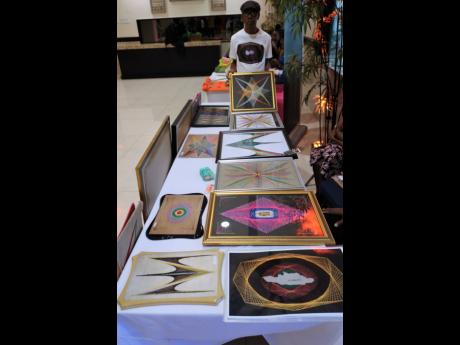 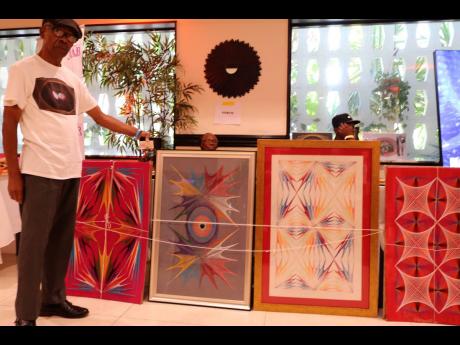 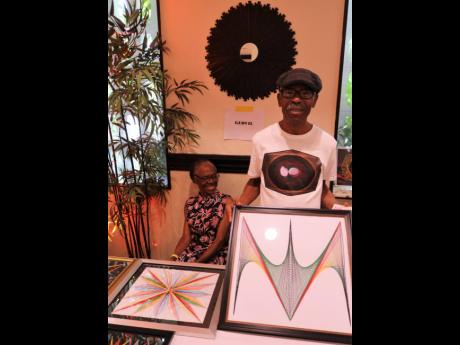 In a right triangle, the square of the hypotenuse is equal to the sum of the squares of the lengths of the other two sides – The Pythagorean Theorem.

A fundamental principle in mathematics, it is not surprising that this formula, attributed to ancient Greek philosopher/mathematician Pythagoras, has influenced educators the world over. Among them is George Lecky, former principal of Tranquility All-age School in Portland, whose sojourn as a teacher of mathematics has continued even after retirement from the classroom.

Held under the theme Monetizing the Orange Economy: The Future is Creative’, the event focused on artificial intelligence, publishing, and visual arts, as well as the former teacher’s new business venture: visual arts.

His eye-catching pieces were a little different, to say the least, and he was quick to explain why. “What the artist does with paint and brush, I do it with needle and thread. Thus I call myself a Pythagorean artist because all that I do is on the principle of straight lines,” the educator-cum-artist pointed out.

The painstaking attention to detail, colour coordination, and graphics make for compelling pieces such as The Eye, which can take up to a day and half from conception to creation, for which there is growing appreciation.

Describing himself as a self-taught artist who, three years ago, “came up with my own ideas and just started expanding them”, Lecky, who now operates from the Corporate Area, was proud to share his proudest achievement to date.

“I have a piece in the National Gallery for its summer exhibition, where it will be on display until October,” he disclosed, and while patrons have been warming to his mathematics-inspired artwork, Lecky’s efforts to impart this skill have not found favour with youngsters with whom he so eagerly wants to share.

“I invited people to come, but nobody seems to be interested in it,” he lamented, and while the art world is not yet beating a path to his doorstep, the visual artist is encouraged.

“The response has been fairly good,” he said with a nod and smile.

Depending on size and whether they are framed, the pieces range from J$7,000-J$30,000 and are largely influenced by Lecky’s “likings”, but he is open to developing concepts in keeping with clients’ demands.

“For people who want something special, something unique to fill a particular space, I can create a design of great interest, and then if you want something customised to commemorate an event or date, then that is just as well. For example, if a person wants a personalised piece, I can do that, for example, Happy Birthday, Happy Teachers’ Day, or Happy Anniversary, or any other occasion.”