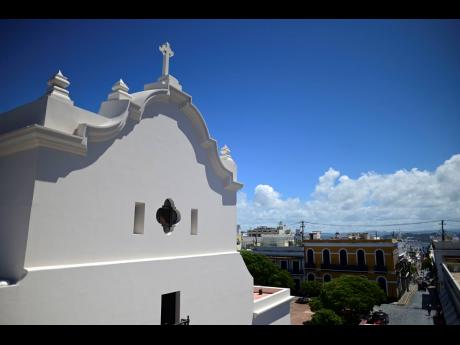 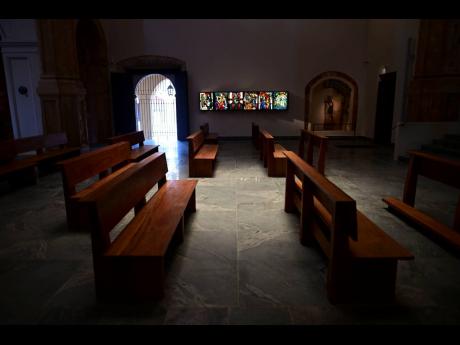 AP
Pews stand in the San José Church as it reopens after reconstruction in San Juan, Puerto Rico. The second oldest in age only to the Spanish cathedral in the neighbouring Dominican Republic, it was shuttered in 1996 due to serious deterioration. 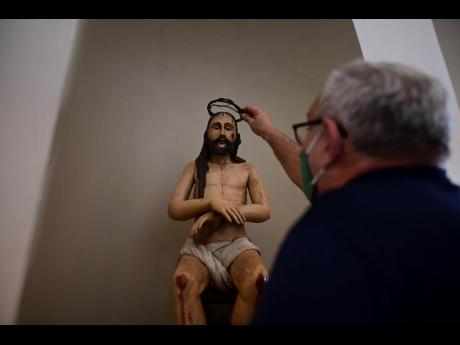 AP
Architect Jorge Rigau arranges a crown of thorns on a statue of Jesus inside the San José Church. 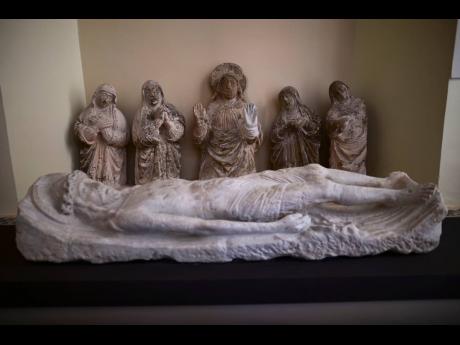 AP
Religious sculptures are inside the second oldest Spanish church in the Americas, the San José Church. 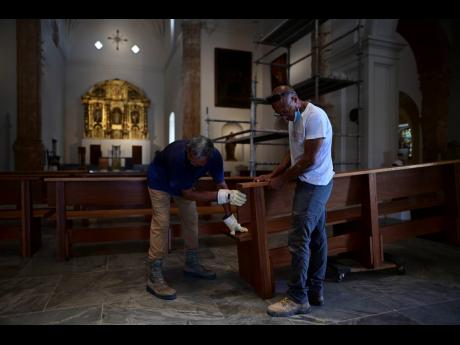 AP
Workers set up a bench inside the San José Church. The church was built for a Dominican convent where the renowned Spanish priest Bartolomé de las Casas once lived. 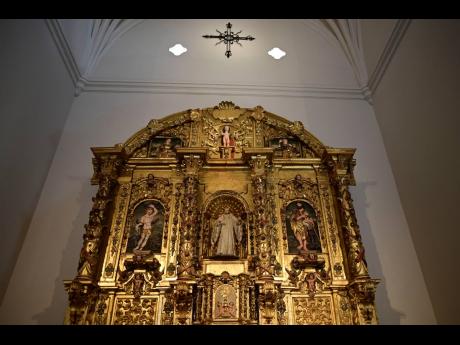 AP
An altarpiece shows religious figures inside the second oldest Spanish church in the Americas, the San José Church, All the figures depicted on the church’s gilded altar have been identified except for one: a woman with flaxen hair in the upper left-hand corner holding a palm frond, which indicates that she was a martyr but offers no other clues. 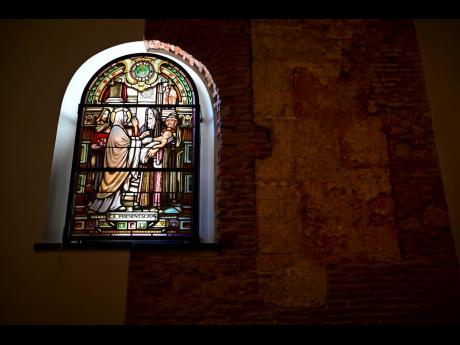 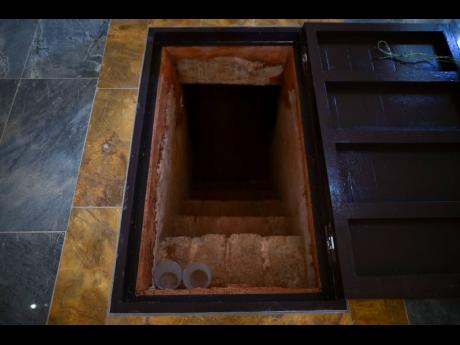 AP
The entrance to a crypt stands in the middle of the altar inside the second oldest Spanish church in the Americas, the San José Church. 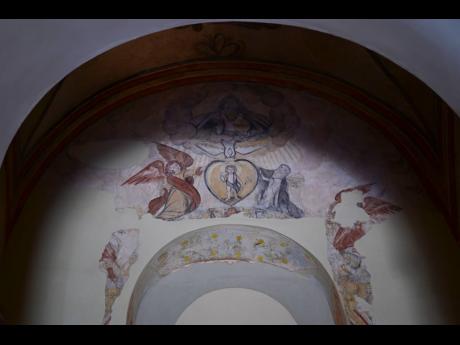 The construction worker stood on his tiptoes and tried to arrange a crown of thorns on a statue of Jesus while architect Jorge Rigau fired a flurry of directions from beneath the ladder.

“Grab it like this and move it just a bit,” he said, motioning with his fingers. “Move it to the right, but don’t lower it.”

It was one of the final touches on a detailed restoration of the second oldest surviving Spanish church in the Americas, whose construction had begun by 1532 on land donated by famous explorer Juan Ponce de León and whose base was erected atop an indigenous settlement.

The church, which was built for a Dominican convent where the renowned Spanish priest Bartolomé de las Casas once lived, served as shelter during an attack by the indigenous Taínos, became Puerto Rico’s first high school and was damaged by a cannonball during the 1898 Spanish-American War in which Spain ceded Puerto Rico to the US.

But the San José Church – surpassed in age only by the Spanish cathedral in the neighbouring Dominican Republic – was shuttered in 1996 due to serious deterioration. San Juan’s own cathedral dates to 1521, but the original wooden building was destroyed and the current structure dates to 1540.

The $11 million restoration became a personal project for businessman Ricardo González that took nearly two decades to complete. Many thought it would fail due to funding problems, the lack of an original blueprint to provide guidance and widespread deterioration including termites, pigeon droppings, and tree roots that had pierced the church’s Gothic-style nave whose ribbed vault was once described as “a grand accomplishment rarely seen outside Europe”.

González, who is active in the Catholic Church, volunteered to help oversee its reconstruction in the early 2000s with permission from Msgr. Roberto González, the archbishop of San Juan. He figured it would take one year to complete.

But as workers probed with radar and laser technology and physically peeled away the church’s layers, they uncovered centuries-old murals and architectural techniques once used by the Romans. Ricardo González realised he faced a deep and lengthy restoration process.

“When we started on that, there was no turning back,” he said.

In 2009, he founded the Patronage of Monuments of San Juan, Inc to raise more funds for the project. Donations ranged from a couple of quarters to large amounts given by businesses, nonprofit organisations and wealthy Puerto Ricans.

Actor Benicio del Toro joined the pleas for donations as the building was added to the 11 most endangered historic places listed by the US National Trust for Historic Preservation.

For years, tourists and locals had all but given up on being able to once again visit the site.

On a recent visit to the church, González’s eyes teared up.

“Every day I walk through there and get emotional,” he said as he stood on the roof and gestured at the building. “I’ve seen the movie, you know?”

It began, he said, with National Park Service experts showing construction workers how to use lime in accordance with the church’s original workmanship. Workers then had to chip away the concrete that covered the walls of the nearly 17,000-square-foot church bit by bit, in tiny sections to avoid damaging what might be below.

Later, experts were hired from abroad to restore murals and other art, including armoured mermaids painted in the corners of one chapel.

The renovation was halted only three times in nearly 20 years: briefly after 2017’s Hurricane Maria, during last year’s pandemic lockdown, and in 2008 when the lime supplier temporarily ran out of material.

Rather than face that problem again, González that decided the workers – many of them from the Dominican Republic – would learn how to make their own lime, a lengthy process that requires ageing the mixture. Instead of horsehair once used to help bind such material, González opted for strips of fibreglass.

They shunned the easier but less authentic concrete used during a prior restoration.

“The cement does not allow the walls to breathe,” he said, noting that humidity played a role in the deterioration of the church, which was built near the ocean atop an Indian settlement at the highest point of San Juan’s historic district, known as Old San Juan.

The church and its walls have survived a lot over the centuries, said Archbishop González, who is not related to the businessman.

“It’s a wonder,” he said as he scanned the church while sitting on one of the pews that will be used for Masses after the opening on March 19.

Restorers intentionally left the church’s history exposed in some areas: centuries-old, clay-coloured walls and columns as well as faded murals and a niche that once served as the original confessional. A slightly elevated line inside the church’s entrance outlines the shape of the original roof. The restorers framed the area where the cannonball hit during the 1898 war.

“We let the church talk to you,” Rigau said, adding that visitors “will find witnesses, ghosts, memories, scars.”

But at least one mystery remains. All the figures depicted on the church’s gilded altar have been identified except for one: a woman with flaxen hair in the upper left-hand corner holding a palm frond, which indicates she was a martyr but offers no other clues.