Debating is not just talk 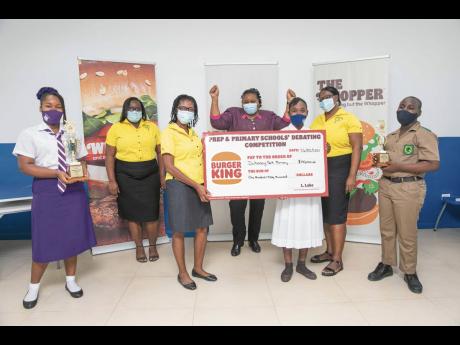 Six students – three from Hillel Academy and three from the Duhaney Park Primary School – are singing the praises of debating as an excellent tool for building confidence, language, communication and critical thinking skills.

Both schools were named joint champions of the 2020 Burger King Prep and Primary School Debating Competition, having reached the finals of the face-to-face contest before COVID-19 caused a curtailment last year.

Twelve-year-old Hillel Academy student Saajah Sewell, who was voted “Top Debater” of the entire competition, loves the preparation for debating which, she said “allows me to convey what I have to say in the best possible way”. She was encouraged to join the Debating Club by her guidance counsellor at a previous school, following her stellar presentation at a morning assembly and is very happy that she took that advice.

Her teammate, Adlai Nixon, said, “Debating has helped me to better express myself, to speak up, and I learn so much in researching the various topics.” For 11-year-old Jacob Chen: “Debating is intriguing and perfects critical thinking. Whatever profession you pursue, you need to be able to communicate properly.”

The Duhaney Park Primary School students are equally keen on debating. Twelve-year-old Moya Edwards, now a student of Immaculate Conception High School, said “it expands your vocabulary, helps you develop your opinions and to communicate how you see things”.

Moya’s teammate, Danielle Jade Walters, 13, now attending Campion College, had the encouragement of her teachers who would constantly tell her “you speak so well”. The experience as a debater has helped her “gain confidence when speaking before an audience, and now, it comes almost naturally – no nervousness.”

Sabrena McDonald Radcliffe, head of sales and marketing of Restaurant Associates Ltd, franchisees for Burger King (BK), hailed the students and the coaches of the two schools for “outstanding presentations”.

“The children were keen competitors, articulate, convincing and very persuasive in presenting their arguments, and we were extremely pleased at the level and standard of the competition in general,” McDonald Radcliffe said.

She noted that “with 312 competitors, the 2019-2020 competition was the largest to date – a 50 per cent increase on previous years – with schools from St Ann, Portland, and St Thomas, joining Kingston and St Andrew student debaters for the first time”.