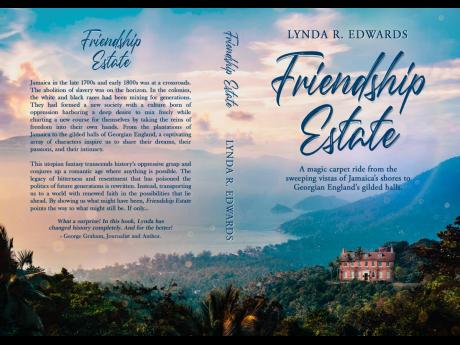 L ynda Edwards and George Graham are two Jamaica-born writers who are a generation apart, living in Florida. George was born in 1934 in Black River, Lynda was born in 1967 in Mandeville. George spoke with Lynda about her new book, Friendship Estate.

George: So what prompted ‘Friendship Estate’?

Lynda: Friendship Estate is my quarantine baby. Before COVID, my husband and I were working twelve hours a day, six days a week. COVID hit, and we were left staring at each other asking, now what? All of a sudden, we were struck by fear of the unknown, fear of not being guided by competent leaders, shut in, but shut out of being able to have a say in what our future would be, not sure what this new normal would look like, feel like, taste like. I needed to find my equilibrium again, and I found consolation in writing this book.

George: When first we spoke, you were writing another book. What happened?

Lynda: I was yes, but I kept watching the news, all the racial unrest in the States and around the world, and I just kept thinking, what if? What if history had taken a different path. Then I remembered something my brother emailed me in December of 2018, and my imagination took over.

George: What was that?

Lynda: After my father died in 2012, my brother inherited the Finlason family Bible with pages dedicated to names, births, marriages, and deaths. We knew about the Coke side, the Delevante side, and the Henriques side, but the Finlason side was a bit of a mystery. He hired someone to research our Saint Elizabeth history, and this research provided enough information from the registrar general to go further. My brother combed through the National archives and visited churches and gravesites. He found some pretty interesting stuff, including elements of the will the book opens with. My imagination did the rest.

George: ‘Friendship Estate’ has taken a different approach to the Master-Slave relationship. What motivated you there?

Lynda: Two things, one was an interview I saw with Patrick Chung. He is Jamaica-born and plays with the New England Patriots in the American Football League. He decided to sit out the 2020 football season because he didn’t want to endanger his family by taking the chance of infecting them with the virus. He put family over anything else. While he expressed his frustrations about being black in America, he said something that really resonated with me. I am paraphrasing, but he said: “Growing up in Jamaica, it’s all about how you act and how you carry yourself, and that’s what really defines a person. Jamaicans don’t see themselves as anything but Jamaican.”

And I thought, here is another way Jamaicans can lead by example. Then my brother sent me a book written by my great-, great-, great-, great-grandfather, Bernard Martin Senior, called Jamaica As It Was, As It Is and As It May Be. He lived in St Elizabeth and published the book in January 1835. It was not easy reading but certainly gave another perspective that I had never been taught in CXC history.

Indeed, society was far more complex than let on. For instance, Munro College, also in Saint Elizabeth, was founded in 1856 via a trust. One of its two benefactors, Robert Hugh Munro, died in 1798. The other benefactor was his nephew, Dr Caleb Dickenson, who died in 1821. Both were men of colour. Emancipation was in 1834. So two men of colour, one a learned Doctor of Medicine, funded a school that is reputed to have produced more Rhode Scholars than any other secondary school in the Caribbean. Now isn’t that an achievement worthy of being taught in Jamaican schools?

George: How did growing up in Jamaica influence your book?

Lynda: That is a great question and not one easily answered. Growing up in Jamaica, my family and friends were a rainbow coalition. One of the advantages I think I had was not growing up in a society that identified colour. “We all mix up, mix up” was probably the most important life lesson I learned growing up in Jamaica - one I tried to convey in Friendship Estate. The heroes in this book are black, varying shades of brown, and white. Everyone had to work together. Love and acceptance is the driving force behind all that they do and how the story develops.

George: I described it as a ‘magic carpet ride’ because it does have a lot of unexpected twists and turns.

Lynda: You were the first person to read the book. Your insights and edits were a gift! You grew up in a different Jamaica than I did, and comparing notes, it was easy to see the progress Jamaica has made in race relations since Independence. That was an amazing eye-opener for me. Colonialism was designed to create irreparable divisions based on class and colour, but Jamaicans have overcome that to a large extent – at least that has been my experience.

George: I tried to make that point in ‘Genevieve’s Little Ways’. In Grandpa’s family tree, different ethnic backgrounds emerge – European, Jewish, Middle Eastern, African, Indian, and Chinese – without anyone expressing surprise or even mentioning it. That, to me, is Jamaica’s gift to the world.

Lynda: And that’s the point I make in Friendship Estate. Jamaica is a melting pot of cultures and races, and that pot has produced a delicious stew that the whole world has noticed. Our music, food, and culture are well known throughout the world, but we have so much more we can offer, primarily through the stories we tell. As I write in the book: “The 7th Duke of Ergill is in a unique position. Lord Dunbarton can influence the course of history because of how he has lived his life on the tiny island of Jamaica.”

George: Friendship Estate is more of a utopian fantasy than a historical novel. Why did you take that approach?

Lynda: A friend of mine introduced me to the writings of Harry Turtledove, an American novelist who writes in the Alternative History genre, and I was intrigued by the concept. Robert Harris, an English novelist and former BBC journalist, has also written in this genre. His first novel, Fatherland, has as its setting a world where Germany won the Second World War. That blew my mind, but it did get me thinking.

George: You seemed to really capture the sensuous lifestyle of the times. The writing style is entirely different from your first book. How did you accomplish that?

Lynda: The main male characters have grown up seeing sex used as a weapon, but they reject that premise. While attracted to the sensuality of the women they end up with, it is their intelligence and individual accomplishments that these men fall in love with, recognising the inherent value in these women as their equals. For that period, I had to take the time to describe the opulence, decorum, pomp, and ceremony. To convey that adequately required a different writing voice.

George: Why did you decide to self-publish Friendship Estate?

Lynda: Several reasons, the main one being I couldn’t find anyone to publish it. Caribbean writers are a niche market. Even though there are roughly ten million West Indians living on the islands and another ten million in the diaspora, I could not find one literary agent or publisher of fiction books in Jamaica, Trinidad and Tobago, the United States, Canada, or England. This is an untapped market that is just out there floating on a life raft in the middle of the Caribbean Sea, waiting to be found.

George: How did you publish your book?

Lynda: I did some research. I found a company to design the cover and format the book. Then I found a publishing and distribution company. Then I went to work on marketing the book to family and friends. I also found bookshop.org. This website is a result of the pandemic and is a socially conscious way to buy books online while preserving the profound cultural benefits of bookstores. They dedicate most of their profits to supporting local, independent bookstores, authors, and publications that cover books. So I set up a book shop, www.bookshop.org/lists/lynda-r-edwards-book-list, dedicated to promoting Jamaican and West Indian writers. It’s doing very well and something I am very proud of. I want it to be a one-stop-shop for lovers of Caribbean novels to find all we have to offer in one place.

George: What’s next for you?