Fight for the flag 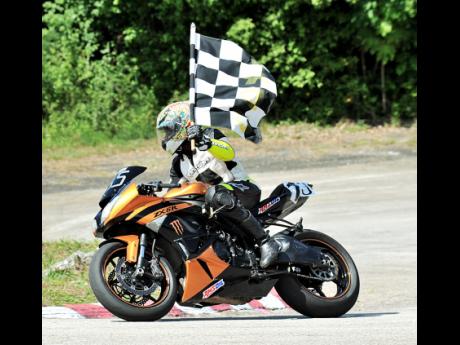 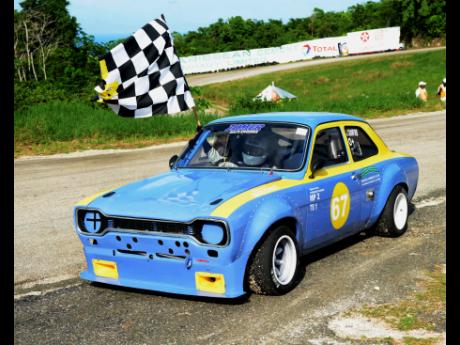 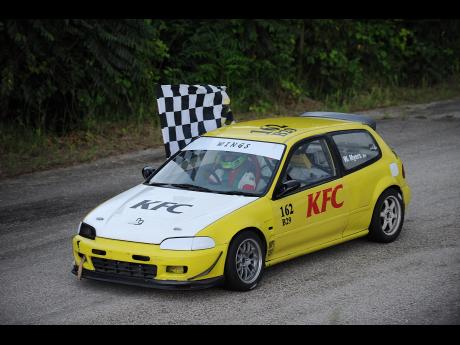 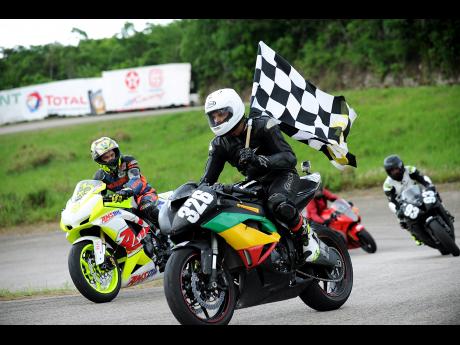 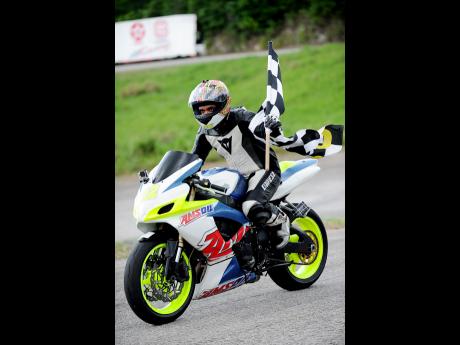 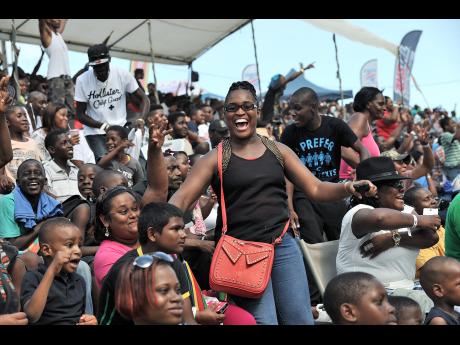 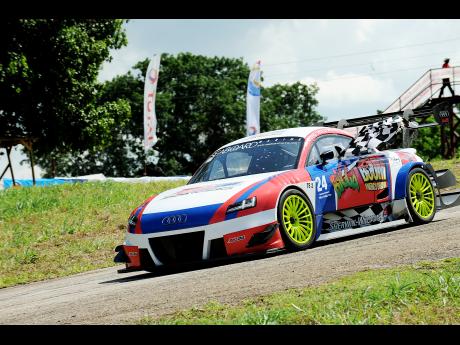 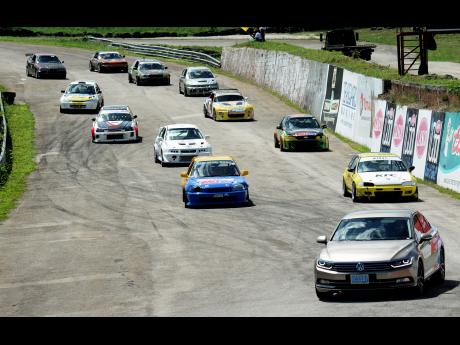 Ian Allen
Cars line up on the track under orders. 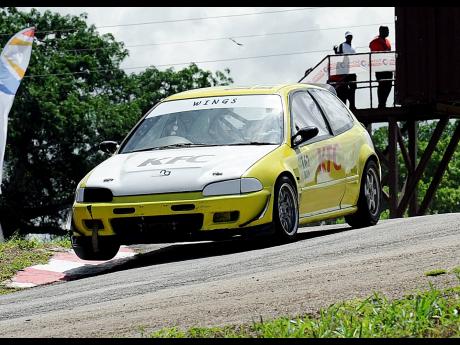 Ian Allen
A tyre is off the tarmac during the intense racing. 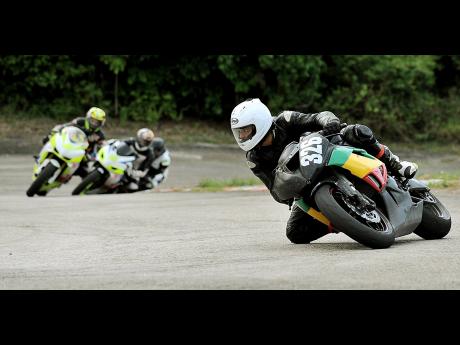 Ian Allen
The motorcyclists are a picture of concentration. 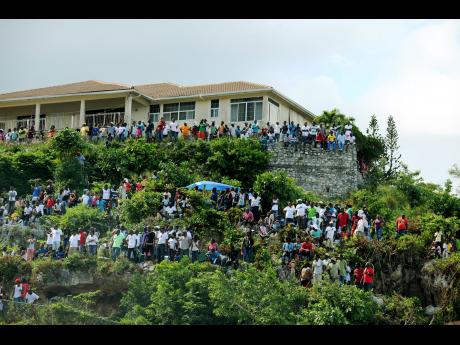 Ian Allen
The Dover grounds and the high points around that afforded a vantage point were occupied by circuit racing fans last Monday. 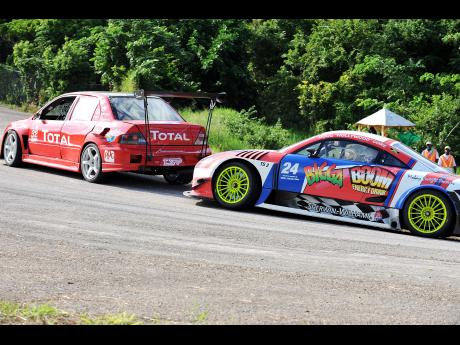 File
David Summerbell leads Doug Gore at one point during a race. 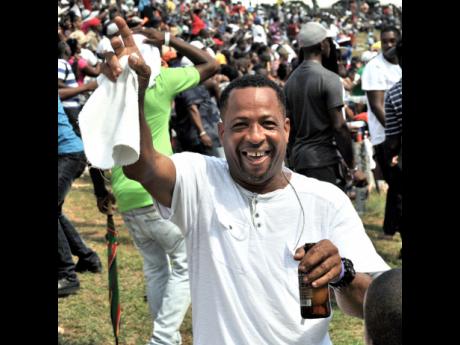 The nail-biting, dramatic showdown which unfolded at Dover Raceway, St Ann, on Monday was just the latest public salvo between the country's top circuit racing drivers, Doug Gore and David Summerbell. Their fierce rivalry had the hundreds of fans screaming while shifting to and fro from one end of the compound to the other as they attempted to keep their eyes fixed on the races.

It was the Thundersport events that injected life into the grand finale race meet for 2015, dubbed the Heroes of Speed carnival.

"In my 25 years of coming to Dover, I have never seen anything like this. Gore and Summerbell were racing 'neck to neck' approaching corner two. At one stage, the two cars made contact and immediately I started praying, asking God not to let anything bad happen because I wanted to see them battling it out, down to the wire," freelance photographer Hugh Wright told Automotives shortly after the running of the second Thundersport II event.

Gore and Summerbell confirmed that their cars did make contact while approaching and negotiating corner two. The two started at the back of the pack and wormed their way to the front.

"The marks on my car are there to show that we did touch. David (Summerbell) was covering his racing line excellently. So, when I saw the white flag (signal for the penultimate lap), I late braked him and then dived in on the inside, while exiting corner two. We raced head to head for the next couple of corners before I went in front with David in hot pursuit. For a moment, I was just dying to see the chequered flag. I was glad when the race ended," said Gore, who has hailed Summerbell as a phenomenal, true racing driver.

"The fans may form the opinion that because of the intense rivalry between me and David on the track, we are enemies. But no, we are friends. Just recently, we went for lunch when I visited Kingston. He is somebody that I have a lot of confidence in," added Gore, who is currently eyeing a racing series in Florida, hoping to contest there next year.

Though Gore made a clean sweep of the Thundersport II events, Summerbell was able to amass enough points to take the class title. Immediately after he pulled in off the track after the running of TSII, the former Caribbean champion driver was mobbed by an appreciative crowd.

"It was a compliment. It is the best consolation prize one could have received. I guess the people were appreciative of the hard work and effort that we put in, and this is their way of saying well done," said Summerbell.

During the high drama, a uniformed policeman, with both hands raised, cheered for his favourite driver, while another fan nearby hoisted a metal dustbin into the air thrice, as he unapologetically shouted in support of Summerbell. A petite young lady almost wept when Gore assumed the lead, ahead of Summerbell.

For a moment, the atmosphere was tension filled and gripped with emotion. The fans of Gore and Summerbell engaged in heated discussion about who is the better driver.

"The emotion was really high because I remember when I drove back into the pit area I saw my fiancÈe in tears," said Gore.

The only other clash of the day that shared the spotlight was between newcomer William Myers and long-time campaigner Gary Barrett. Based on his performance, young Myers could be a force to reckon with next year.

Despite the impressive display of driving at Dover last Monday, nobody collected the $50,000 which was promised to any driver who broke the lap record.

Making history, 17-year-old Fraser McConnell became the youngest competitor to win the overall drivers' championship when he took the coveted trophy for the 2015 season. This is only his second year of circuit racing.

Gary Barrett won the Improved Production Class title. Peter Rae was missed. He did not take part in the meet as his Epping Mazda R-X7 experienced engine failure on the dyno during the final check.