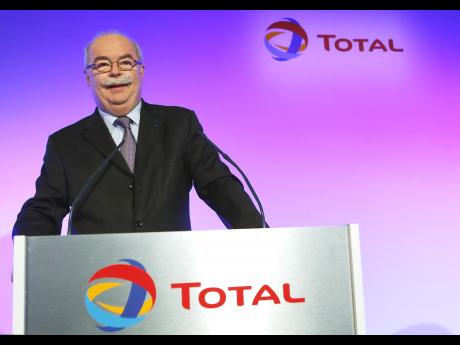 Christophe de Margerie, the charismatic CEO of Total SA, who dedicated his career to the multinational oil company based in France, was killed at a Moscow airport when his private jet collided with a snowplough whose driver was drunk, Russian investigators said Tuesday.

Three French crew members also died when the French-made Dassault Falcon 50 burst into flames after it hit the snowplough during takeoff from Vnukovo airport at 11:57 p.m. on Monday local time.

Tatyana Morozova, an official with the Investigative Committee, Russia?s main investigative agency, said investigators are questioning the snowplough driver, who was not hurt, as well as air-traffic controllers and witnesses.

?At the current time, it has been established that the driver of the snowplough was in a state of alcoholic intoxication,? Morozova said.

NTV television showed the charred plane lying on a grassy field. Though it had snowed earlier Monday in Moscow, it was unclear how much snow remained at the airport at the time of the crash.

Vnukovo is the airport used by Russian government officials, including President Vladimir Putin, and visiting foreign leaders. It also handles commercial flights from a separate terminal.

De Margerie, 63, was a regular fixture at international economic gatherings and one of the French business community?s most outspoken and recognisable figures. His trademark silver handlebar earned him the nickname ?Big Moustache?.

A critic of sanctions against Russia, he argued that isolating Russia was bad for the global economy. He travelled regularly to Russia and recently dined in Paris with a Putin ally who is facing EU sanctions over Russia?s involvement in the crisis in Ukraine.

According to the Kremlin, Putin sent a telegram to his French counterpart, François Hollande, lauding de Margerie for being at the ?origins of the many major joint projects that have laid the basis for the fruitful cooperation between Russia and France in the energy sphere for many years?.

Hollande expressed his ?stupor and sadness? at the news. In a statement, he praised de Margerie for defending French industry on the global stage, and for his ?independent character and original personality?.

De Margerie started working for Total in 1974 after receiving his degree because it was close to home. It was a difficult time to join the firm as the oil embargo, which led to a four-fold increase in prices, was coming to an end.

?I was told ?You have made the absolute worst choice. Total will disappear in a few months?,? he said in a 2007 interview with Le Monde newspaper.

De Margerie rose through the ranks, serving in several positions in the finance department and the exploration and production division before becoming president of Total?s Middle East operations in 1995. He became a member of Total?s policy-making executive committee in 1999, CEO in 2007, before adding the post of chairman in 2010.

He was a central figure in Total?s role in the United Nations oil-for-food programme in Iraq in the 1990s. Total paid a fine in the US, though de Margerie was acquitted in France of corruption charges.

Under his leadership, Paris-based Total claimed it became the fifth-largest publicly traded integrated international oil and gas company in the world, with exploration and production operations in more than 50 countries.

On Monday, de Margerie took part in a meeting of Russia?s Foreign Investment Advisory Council with members of the Russian government and other international business executives.

Jean-Jacques Guilbaud, Total?s secretary general, said the group would continue on its current path and that the board would meet in coming days to discuss who will succeed de Margerie. Total planned a minute of silence in its offices, worldwide, at 2 p.m. Paris time.

After dipping slightly early Tuesday, Total?s share price was trading two per cent higher, in line with the broader rally in French stocks.