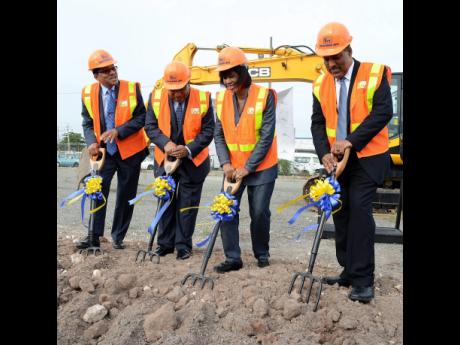 Kingston Wharves Limited (KWL) will begin construction of its new logistics centre in November, and wrap up the development a year later.

The port company is investing US$20 million (J$2.2b) in the first phase of the Total Logistics Facility, which it plans to commission into service in January 2016.

KWL Chairman and Chief Executive Officer Grantley Stephenson said at the project launch on Wednesday that space at the 160,000-square-foot facility, which will be "more than a state-of-the-art building", was almost fully allocated to business ventures.

Negotiations are ongoing, he said.

"This initiative symbolises our commitment to shaping our future," said the port executive. "We are building on a strong history in the shipping industry - towards a shared vision, where the Port of Kingston is the centre of trade in this hemisphere."

He said that although ground was being broken on Wednesday, "We set sail on this project several months ago and even at its embryonic stages we had the support of our partners, who believed with us that this KWL brainchild would take on national significance."

Acknowledging the role played by government ministries, agencies and departments in bringing the venture to fruition, Stephenson said that "while we are just at the beginning, this project is a big reason to celebrate".

Just last week, he said, the Caribbean Shipping Association, at its annual general meeting and conference in the Dominican Republic, named Kingston Wharves' port facility as the multi-purpose terminal of the year.

"Our performance was measured against a number of our counterparts throughout the Caribbean and Latin America - against countries like Panama, Colombia, the Dominican Republic, and US East Coast ports like Port Miami," he said.

"These countries all have booming shipping industries to which we very often look ... in our quest to establish our own best practices. This is a tremendous vote of confidence and an accolade that we do not take for granted," said the KWL CEO.

Stephenson said the $2.25-billion investment in the logistics facility is part of a comprehensive US$70-million expansion plan which KWL will execute over five years.

In addition to expanding its footprint in preparation for a new wave of competition, Kingston Wharves has committed to undertake investments in the community in which it operates, Stephenson said.

Stemming from discussions with the leadership of the Port Trailer Haulage Association, KWL has offered dedicated space for a central chassis park for the industry, said the chief executive.

"This represents a near $35 million in commitment, but we see it as a necessary move that will support the penetration of first-

world standards and signal to the international community that as our port becomes world-class, so too are the industries and service providers allied to it," he said.

KWL is also partnering with the Government in the rehabilitation of the infrastructure at Newport West, said Stephenson, explaining that about US$3 million will be needed to carry out works to improve the drainage system, of which Kingston Wharves will provide US$1.5 million.

"We have also, just recently, spent more than J$10 million to rehabilitate sections of Newport Boulevard," he said.

Pointing to the pockets of informal businesses along the roadways in the area, Stephenson said those vendors, some of whom have been operating in Newport West for decades, provide a valuable service and do well enough to sustain their operations and provide meaningful livelihood for their families.

He said KWL has allocated property and will shortly set up a food court, using the Faith's Pen model to properly house vendors. "This is a very timely move amid talks on the need to improve health, safety and sanitation," he said.

The logistics project has already generated employment for 50 persons, while another 150 will be employed during construction. The centre, once operational, is expected to generate 450 jobs.

The complex be a one-stop logistics and warehousing solution operating 24 hours daily, seven days per week.