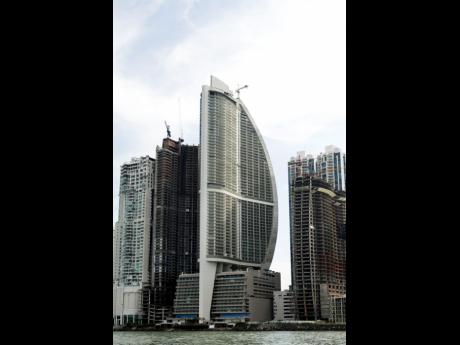 The directors of a massive Trump-branded luxury condominium development in Panama fired Donald Trump's company during the summer over allegations of mismanagement, overspending and undisclosed bonuses executives paid themselves, according to an Associated Press examination.

The coup at Central America's largest building, Panama City Trump Ocean Club, offers a glimpse into the workings of the Republican presidential front-runner's business empire - and the style of management that might be expected from a Trump White House. Transparency and close attention to expenses are not strengths.

Squeezing the most from contractual language is. Whether wheeling and dealing with Wall Street bankers, debating Republican presidential rivals or running a condo association, Trump has forwarded his interests by leveraging his outsize reputation, canniness and aggression.

In an interview, Trump's son Eric dismissed the allegations of mismanagement as an orchestrated attempt to sully the Trumps' reputation. He called the project "an amazing icon and, frankly, a great testament to America".

Built in the shape of an arcing, wind-filled sail, the development is recognised as being among the finest buildings in Panama. Visitors can sip drinks next to a 65th-floor, edgeless pool that seems to float above the ocean.

"I am proud to develop this extraordinary high-rise," Trump said in one 2007 promotional brochure, promising to build a "landmark in Latin America and the Caribbean".

It turns out Trump wasn't a developer on the project. He merely licensed his brand, though even that imprimatur came at a high price. A 2007 bond prospectus for the project estimated his cumulative licensing payout would total US$75.4 million, roughly two-thirds the amount raised.

Burdened by cost overruns and the global recession, the actual developer stopped making debt payments within a few months of the ribbon cutting in 2011. Trump earned an estimated US$20 million of concessions in a subsequent bankruptcy deal, and he is probably the only participant in the original deal to come out ahead.

Along with his branding and hotel management deals, Trump held a third contract to manage the overall building. A patchwork of contractual language gave Trump's company the right to vote at owners' meetings on behalf of hundreds of hotel and condo units. Buyers learnt they were abdicating their voting rights only if they read the fine print of their sales agreements, said Al Monstavicius, a retired Nevada doctor who bought a penthouse condo.

"I shouldn't have signed that," Monstavicius said. "But there was nothing I could do because my money was committed."

Some owners feared that Trump's management might be disproportionately spending the building's budget in ways that benefited the hotel instead of the building's other components. But despite repeated requests, Trump's managers never provided a detailed breakdown of the costs generated by each of part of the building, and never established the separate bank accounts stipulated in their management contract. A senior Trump executive in New York told one owner in 2012 that maintaining five bank accounts would be too expensive.

Trump's top employees in Panama also awarded themselves hundreds of thousands of dollars in bonuses without seeking the authorisation of unit owners, according to members of the board. Eric Trump said such payments were appropriately disclosed - though board members say they still don't know the amounts of the bonuses.

Transparency concerns took on a heightened urgency given the Trumps' failure to stay within its owner-approved budget.

"We made the budget, other than extraordinary things we can't control," said Eric Trump. He cited rising local costs and a broken water main as culprits for US$1-million deficits in 2013 and 2014. "We had an unbelievable team, and we managed to an internationally renowned set of standards."

"Civility was lost," said Duncan McGowan, a real estate agent and property manager on the building's board.

After the meeting, McGowan and other dissidents lobbied fellow owners to revoke proxy voting rights granted to Trump. With the help of votes controlled by representatives of both the casino and the developer, the dissidents defeated a Trump-backed special assessment at a building-wide meeting in May.

Two senior Trump administrators resigned their jobs and board positions following the rebuke, leaving the dissidents in charge. After negotiating with Trump Organization executives in New York for several months, on July 28 the board fired Trump.

Trump attorney Alan Garten responded days later, calling the termination "a complete sham" and refusing to accept it. He accused the board of ingratitude and criminal trespassing. Garten declared that Trump's company was quitting - and demanded a US$5-million termination fee. When the directors took possession of the administration offices, Trump's people disconnected the phone and Internet service and repossessed the copying machine.

Following a period of heated correspondence, a tense co-operation has set in. Trump's name is still on the building, and the Trump Organization operates and oversees the hotel, but not the rest of the complex.

"The hotel is something near and dear to our heart," Eric Trump said, noting that the hotel management contract runs for 40 years.

Even unit owners who have expressed misgivings about Trump's tactics are OK with the arrangement.

But the Trump name still holds an allure.

"It attracted me," he said, "and attracted a lot of other people."