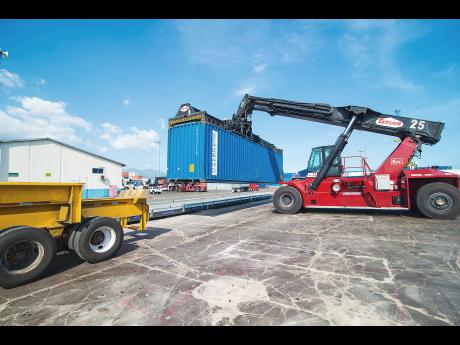 A container is placed on the new weighbridge at Kingston Wharves in this file photo. Kingston Wharves Limited is reporting increased business from shipping line diversions linked to Hurricane Matthew.

Kingston Wharves said it is expecting to service several Maersk vessels in the coming weeks following last week's call by the Post-Panamax container, Northern Jubilee, which was forced to adjust its schedule because of significant damage to the Freeport Container Terminal in The Bahamas during the recent passage of Hurricane Matthew.

It said it is also prepared to be of service to the company as a trans-shipment terminal going forward.

Marketing and client services manager at Kingston Wharves, Simone Murdock, told the Financial Gleaner there is no confirmation when the Freeport terminal will be reopened and hence "we will continue to be of service to Maersk and any other vessel that is displaced".

Noting that it was additional business which Kingston Wharves had not anticipated, Murdock emphasised that for a shipping line like Maersk, the world's biggest based on twenty-foot equivalent units (TEUs) or weight-carrying capacity, being able to provide them with the service of managing their cargo for the region, even if it's interim, "this is, of course, additional benefit to us".

In a release, Kingston Wharves said that when the Post-Panamax vessel arrived, its team was prepared to ensure that despite the unscheduled berthing the normal stevedoring would take place.

"The experienced and expert KW operations team and three of its mobile harbour cranes, which included its largest and most recent acquisition, a Liebherr LHM 550 crane, were on hand for the Northern Jubilee," it said.

Largest vessel ever at wharf

Murdock said the Maersk mega-liner, Northern Jubilee, which has a capacity of 8,400 TEUs loaded in 17 container rows across, was the largest vessel ever handled at Kingston Wharves. It was docked at berths 8 and 9, the newest addition to the port, which is still being expanded.

Kingston Wharves said it also currently in the midst of improvement works to increase its trans-shipment capacity and also position it to accept calls from the mega vessels now using the expanded Panama Canal.

"Kingston Wharves has shown that our expansion programme is well placed to return on the investment made based on our ability to accommodate a vessel as big as the Northern Jubilee at our terminal. This is an opportunity to showcase our capabilities and can-do attitude to a global audience and a global carrier," said the port's chief executive officer, Grantley Stephenson.

"This opportunity can only redound to the benefit of our terminal expansion and ultimately position ourselves as prime contenders in this competitive marketplace," Stephenson said.

On Wednesday, Kingston Wharves said Germany-based equipment manufacturer Liebherr Maritime Crane delivered its latest acquisition - a LHM 600 mobile harbour crane, which will now become the biggest to be operated in the Caribbean.

"That will add to our capacity to do even more," said Murdock, adding that the equipment was ordered long before the additional business they have now taken on.

This brings to US$8 million the company's investment in such equipment, the first of which, the Liebherr's smaller LHM 550 high-rise version, was delivered a year ago and "is a show of our commitment to Jamaica and the logistics hub initiative," she added.

The LHM 600 will start operating this month at Kingston Wharves' multipurpose terminal.

The new crane, which is expected to facilitate the terminal's handling of big container vessels up to super Post-Panamax size, is equipped with a 12-metre tower extension claimed to enhance safety due to the higher position of the tower cabin of 37 metres.

The new unit, which features a maximum outreach of 58 metres, twin-lift capability and a 104-tonne lifting capacity, is able to operate vessels up to 19 container rows wide and nine container stacks high.

Stephenson said the new crane is expected to maximise the terminal's efficiency and increase its responsiveness.

"This new machine is the next essential future investment in our terminal in order to handle the new generation of vessels that are heading for us in the course of the Panama Canal expansion," he added.