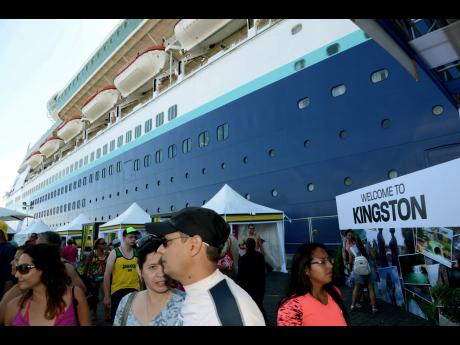 Rudolph Brown
The cruise ship ‘Monarch of the Seas’ docked at Kingston Wharves earlier this month.

Consistent with its ongoing upgrade of the infrastructure at Jamaica's leading cargo port, Kingston Wharves Limited has also been making significant human resource investment as it seeks to position itself as the number one shipping port in the region.

Chief Executive Officer Grantley Stephenson told The Gleaner that investments such as the US$20-million expenditure on a new warehouse and other money spent on acquiring high-tech equipment, necessary for maintaining the company's state-of-the-art operations, consistent with global standards, cannot be a stand-alone venture.

The Caribbean Maritime Institute and HEART/NTA through its NCT/TVET programme are two of the agencies involved in the staff upgrade, which has become absolutely necessary.

"We are using very expensive cranes and other equipment to handle cargo. Insurance companies now want to know what qualifications the operators and the mechanics have, because you are dealing with very sophisticated equipment now and, if you notice, if you get the chance to walk around, you don't see any mechanics getting dirty," Stephenson said.

"Mechanics are now are using laptop computers to diagnose problems and then change the component that is defective. So, it doesn't involve anybody getting dirty anymore. So it's a total change. We are employing young men with at least a first degree in mechanical or electrical engineering to do this now, and we get them certified," he added, during a recent visit to Kingston Wharves to welcome the cruise ship Monarch of the Seas.

However, Stephenson pointed out that the increased marketability of the crane operators and mechanics following Kingston Wharves' investment in their education has a downside for the company.

"Before you know it they disappear to Canada, but you know that's life. But we have contributed to society by doing that because it creates more opportunities for other youngsters to come here," he said.