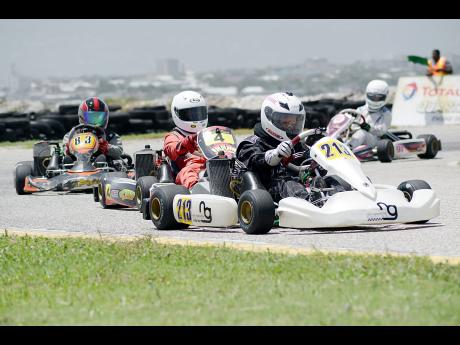 Rocket Go-Karting Experience, a $40 million venture, has established a facility in Portmore, St. Catherine with the aim of providing safe family racing.

"We were open until 2 am Sunday night," said Dwight Lue, managing director of BranLue Imports which owns and operates the facility.

The go-kart facility, based at Congreve Park, near Bayside offers time-based rides which start at $1,000 for a series of laps. It represents the industry standard to charge based on time, said Lue, who spoke to The Financial Gleaner in a telephone interview on Monday.

Rocket Go-kart is a subsidiary of BranLue Import Limited which imports meat and seafood for medium and large distributors.

Lue said that despite spending some $40 million on the go-kart venture thus far more will likely be spent due to ongoing developments, including a food court. Much of the investment went towards acquiring the over 50 go-karts at the facility.

He indicated that the facility is guided by best practices and procedures in established go-kart facilities overseas. Part of that comes with a high emphasis on safety. Consequently, all the go-karts are equipped with a 'kill' switch to shut off the drive train of the vehicles to avoid accidents.

The Lue family is no stranger to the racing fraternity. Three brothers are involved in racing at all levels in Jamaica, including drag racing, go-karting and car tuning activities.

Lue said that while go-karting exists at Palisadoes in Kingston, that facility specialises in racing, while Rocket Go-Karting offers family style amusement.

The idea of setting up the facility arose because "there isn't much to do in the corporate area on Sundays for families," said Lue.