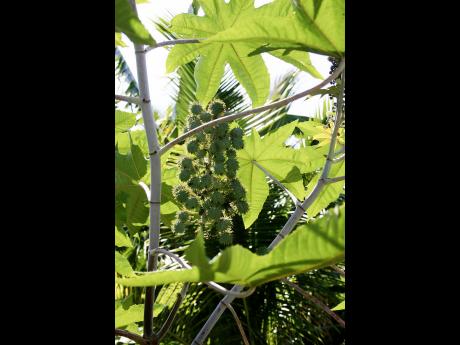 The castor bean, or ‘oil nut’ as it is also known, grows wild across Jamaica.

The market potential for Jamaica’s black castor oil in the United States alone stands at US$28 ­million (J$3.7 billion), but local producers are only tapping a fraction of that business, according to a new study ­organised by Compete Caribbean.

But while local producers lack ­capacity to go after all of that business, they could be tapping more of it once the product is standardised, according to ­presentations at a workshop in Kingston on Tuesday.

“So the opportunity is to capture that market in the US that is not coming from Jamaica. That opportunity is worth US$11.7 million,” Frankie Whitwell, consultant at Compete Caribbean, said at the workshop, where the findings of new research on the product were released.

The firm commissioned by Compete Caribbean to conduct the research­ ­interviewed some 4,500 participants, which was followed up with an in-depth survey of 213 persons. The findings ­estimated the economic value of castor oil, excluding lubricants and commercial industrial products, at US$187 m­illion, of which Jamaican black castor oil accounted for US$28 million.

The study also found that two-thirds of consumers are women; that the product is consumed mostly by whites or Caucasians, at 34 per cent, followed by blacks, at 21 per cent, and 7.0 per cent for persons of Caribbean descent; and that a third of the consumers surveyed indicated that they were willing to pay up to 30 per cent more for the product.

The castor oil market is largely filled with companies that source products from Asia. The oil is mostly from India and China, but they tend to carry the ‘Jamaican black castor oil’, or JBCO, label.

“A significant amount of JBCO oil in the US market is not coming from Jamaica; it is around 70 per cent not from Jamaica,” said Whitwell, a UK national who said he was initially ­sceptical that ­companies in Asia would counterfeit the product until he analysed the market size.

Jamaica itself exports about US$4.8 million worth of the product per year.

“That’s roughly three times the share of the local industry. So, it is enough growth to go around,” Whitwell said.

But even as he highlighted the ­business potential, Whitwell also pointed to the need for the development of local ­standards for the product and for Jamaica to seek geographical indication, or GI, ­status for JBCO, which would provide legal protection against exploitation of the name by others.

Shirley Lindo, a castor oil producer at the workshop hosted by JAMPRO, the IDB and Compete Caribbean, said producers in India have told her that they can produce better oil than she can.

“They are planting seeds by the mile, and what we need to do is put the GI on it and have our own categories, ­artisans, semi-mechanised products and commercial-grade castor oil,” said Lindo, who ­produces the Outa Earth brand. “Producers will fall in line. Under the GI, we have strength,” she said.

Jamaica black castor oil trends as one of the most searched-for products from Jamaica, outpacing Jamaica Blue Mountain coffee, based on checks done by the Financial Gleaner on selling platforms such as eBay and Amazon and social networks, including YouTube and Instagram.

Dr Howard Reid of the Mona Institute of Applied Science at The University of the West Indies said that the development of local standards for JBCO are expected to be finalised within a year and that ­international standardisation and the GI application would follow.