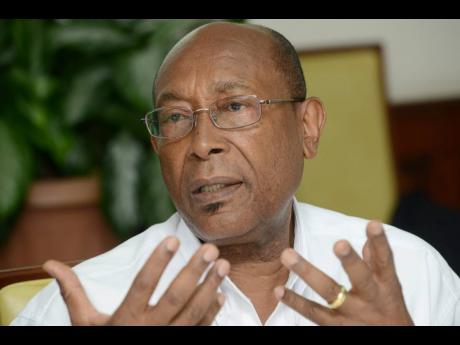 Flavocure Biotech, a cannabis research company that is majority owned by Dr Henry Lowe, has received approval from the US Patent Office for a drug that treats glaucoma and myopia, or nearsightedness.

According to the patent issued on May 7, both Lowe and Flavocure CEO Dr Ngeh Toyang are listed as the applicants and inventors of the drug that Lowe declined to name. The patent office labelled it as a “therapeutic agent containing cannabis flavonoid derivatives for ocular disorders”.

“I am excited to do this type of work which will help millions of people throughout the world. Especially since it’s coming from a little country, recognised for sand, sea, music and sports. I hope this scientific endeavour will be supported and developed to become the next contributing item for Jamaica,” said Lowe.

Flavocure filed for the patent nearly three years ago in July 2016. Lowe said the approval in May is his 12th patent so far from the United States. The Jamaican scientist and entrepreneur is part of a group of global scientists researching medical cannabis.

Lowe will launch two versions of the eye, treatment drug, as a nutraceutical and a pharmaceutical. The nutraceuticals are expected to hit the market later this year, upon approval by the Ministry of Health, while the pharmaceuticals will require costly clinical trials, lasting several years. The patent will allow the company to seek funding for the trials.

The drug builds on work done in the 1970s, which resulted in the development of Canasol as the first commercial medicinal agent from ganja. That research was developed from scientific work led by Professor Manley West and Dr Albert Lockhart.

Lowe has now developed what he termed “a second-generation drug” for treating glaucoma. This time, unlike the Canasol eye drops, the drug can be administered orally, he told the Financial Gleaner.

It becomes the latest in a series of approvals received by Lowe’s firms for cannabis- or ganja-related research, which is expected to lead eventually to commercialisation of the drugs.

Earlier this year, Flavocure announced that it has initiated investigational new drug, or IND studies for its cannabis-derived drug, FBL-03G, prior to seeking IND approval from the US Food and Drug Administration.

Flavocure Biotech Inc is a research lab based in the United States. It has seven shareholders, with Lowe and his Eden Garden Group of Companies as the primary owners.

In April, the Denning Growth Fund, based in Asia, pumped US$1.5 million into Flavocure Biotech for an undisclosed equity stake in the company, which will allow it to fund research and assist in taking its various drugs to market. Denning Growth Fund was particularly attracted to Flavocure because of its advancements on its pancreatic cancer drug developed from compounds found in cannabis.