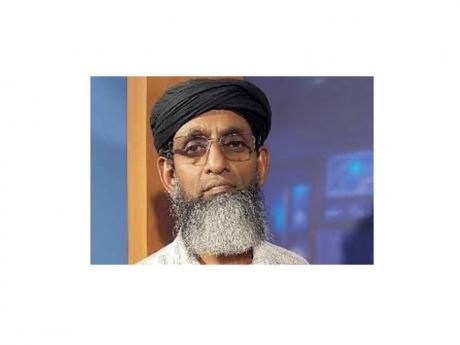 CMC Photo
Head of the Islamic Front of Trinidad and Tobago Umar Abdullah.

Abdullah, who appeared on a CCN TV6 television programme in Trinidad on last night, said that he has had a close relationship with some of the Trinidadians who had journeyed to Syria to fight alongside the ISIS fighters.

Abdullah, who acknowledged that he was once a firebrand Muslim, told television viewers that the government should create fertile soil for these men and their families to return from Syria and other battlegrounds.

“I know these individuals and I know a lot of them who have went away and who have gone and joined with ISIS and so on. Some of them were part of my group. That was in the ‘earlies’ when I had expressed radical views,” Abdullah said.

The video titled “Those who Believe and made the Journey” was distributed on the social network and pro-Islamic state television networks.

National Security Minister retired major General Edmund Dillon told the Senate on Tuesday that the authorities in Trinidad were beefing up immigration controls and deepening surveillance measures in light of the attack in Paris last weekend that killed more than 129 people.

“This government wants to make it abundantly clear that it recognises the global terrorist threat posed by ISIS and the horrific atrocities recently committed on the French people by the ISIS phenomenon,” Dillon told the Senate.

He said in addition to tightening customs inspections at airports and sea ports, re-enforcing aerial and maritime surveillance patrols, Port of Spain would continue to liaise with international partners with respect to intelligence and information, especially in relation to Trinidadian citizens who are participating in the ISIS phenomenon.

Dillon said that Trinidad and Tobago would continue to work with institutions such as the Joint Regional Communications Centre and the Regional Intelligence Fusion Centre (RIFC) – the Caribbean Community (CARICOM) intelligence structure that involves Aruba, Canada and the United States – to provide the necessary intelligence that will allow the country to be proactive in dealing with the situation.

He told legislators that he is holding talks with Attorney General Faris Al Rawi over measures to deal with the matter of Trinidadians returning home after participating in activities with ISIS.

“Madam President, a discussion, a conversation is taking place with the Attorney General of which I cannot provide any more details than that,” Dillon said, adding he was also unable to “give an accurate figure” regarding the number of nationals fighting with ISIS.

“We are still awaiting confirmation from our intelligence partners as to the amount of Trinidadian citizens involved in the ISIS phenomenon at this point in time. I don’t want to average. You cannot average people. You have to be exact. So Madam President I prefer to wait until we have confirmation to get the exact figure based on intelligence.”

Abdullah told television viewers that he does not believe that any of the returning Trinidadian fighters “would pose any threat.

“As a matter of fact they would be more of an asset to this country than anything else. Because one thing they will be doing is talking about their experience out there wherever they have gone and it will be a deterrent for those who are thinking of going,” he said.

Meanwhile, the former executive director of the National Operations Centre (NOC), Garvin Heerah, says young people are looking for a place where they would feel wanted and are vulnerable and easily swayed and a as result join the terrorist group.

He told radio listeners a system must be established to counsel such persons.

“I am saying and I am advocating strongly that we need to have a caucus, we need a grouping a coming together of subject matter experts on this specific field,” he said, adding “I am saying we are at the point here now where we have to design a mechanism so that somebody out there can get on a ... social media space ... and send an SOS out where somebody can start talking to him …

“What we have failed in doing is we have not followed up,” he said.