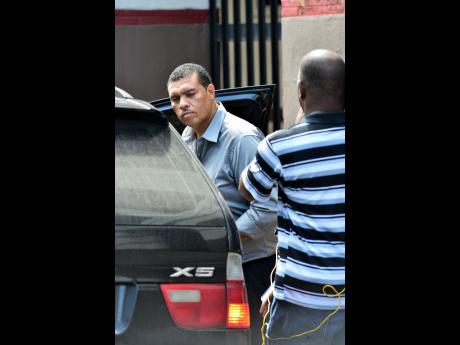 Patrick Planter
Businessman Patrick Powell leaves the precincts of the Supreme Court after being freed of murder.

Khajeel Mais died five years ago and he was killed by a bullet from a 9mm Glock pistol. We know that he was the passenger in a taxicab and seated in the rear, when he met his demise. His family is terribly distraught and miss him immensely. This son, brother and relative is gone forever. Nothing written past this line in this column, on Facebook or other social media is going to bring him back. God, and possibly attorneys with the privilege of the cloak of silence, know who killed the youth. But only God will judge the killer.

No vengeance or court sentence could have cancelled out the death. This fact is inescapable. Thus, as when it occurred back then, my deepest condolences go out to the family of this young man, whose life was prematurely snuffed out. Friends, other relatives and other members of society must embrace the family in their grief and try to empathise.

Nevertheless, all of what I've said is what we know. There was a homicide, but for all our collective pain and outrage, we don't even know whether there was a murder. Now, I know that this sparks all kinds of questions, as to whether I have swallowed the urine of a psychotic feline, but murder is a very specific activity.

It is irrelevant that Mais might have been 'troubled' or, in street talk, a 'bad bwoy'. Even hardened criminals can be murdered, and often are. Thus, his 'innocence' or 'badness' mean nothing. Ask the police who can smell the coffee from INDECOM breathing down their necks. One doesn't have to be an angel to be a murder victim.

To be murdered, one must have been killed in malice. It must not be in cases where one's life, or anyone else's, is being threatened, and this is the exact standard for police as well as licensed firearm holders, or anyone who has means of deadly force, including their hands, legs, cutting tools or stones.

Not only do I stand on the same page as the director of public prosecutions (DPP) in this matter, I stand in the same line, because one could not definitively place the freed accused at the scene of the crime.

We know nothing except that young Mais was killed. A driver of a 'new typa X6' had a collision with the taxi Mais was travelling in. A similar vehicle owned by the accused had prima facie evidence of a gun being fired from the driver's side. The owner of said vehicle owns a Glock, but there is no irrefutable evidence that he was in the vehicle, fired any shots, or had any connection to the locus in quo. And don't 'circumstantial evidence' me. Owning a car which is involved in a collision cannot be prima facie evidence that one was in possession or control of it.

And moreover, owning a gun hardly means that it is that gun which was fired or that he fired it. It is a stupid assumption that the owner of guns, illegal or lawfully possessed, do not aid and abet their illegal possession. Simple fact. Only a dilly-dally taxi driver, with possible fear-induced diarrhoea, dementia and amnesia, saw, didn't see, maybe saw, 'never mek out' or didn't positively identify him.

So let me ask all those who have an opinion, including a lawyer who must have spent too much time at the bar he wasn't called to or frequents. Who else, or what piece of solid forensic evidence, can definitively place the accused man at the scene?

In plain Jamaican language, "Ef u nain dideh, how u know sey him en dedeh?" In law, that is called doubt, and that's all a defence lawyer has to raise. Whatever my gut feeling may or may not be, I honestly do not know if the man who walked free of the murder charge was guilty. What matters is that no evidence beyond any reasonable doubt placed him there.

For all the outrage and diatribe about miscarriage of justice, there is nothing unusual about the formal 'not-guilty' verdict, because dozens of murder accused escape justice although the police know, but just cannot produce evidence that will stand up against a criminal lawyer - and I've chosen my words wisely.

Ask any Jamaican homicide detective who, despite these odds, still managed to arrest around 60 per cent of killers last year. Witnesses disappear, twist their mouth as if under an obeah spell, or simply go blank like a Samsung S7 before burning up on the dock. Had the witnesses taken the ginseng, or the other memory pill whose name slips me now, there would be far more convictions of the guilty. By the way, we need to read the police and DPP's annual reports and kill the lie that most murder accused are found not guilty.

As regards the whereabouts of the missing firearm that the accused has failed to disclose, it means little. Losing one's gun or being careless with it, or even loaning it out, is not a murder charge. Yes, there are other possible criminal charges related to the firearm. However, refusal by an innocent man to produce a firearm, for whatever purpose, does not in itself place the accused in the vicinity of the alleged crime.

Nonetheless, I am deeply disturbed that the accused was charged for failing to produce his requested firearm as required by the Firearm Act. And I shudder to think that anyone could have advised him to wilfully breach the statute. Bet me and lose; nothing in any law or professional code could support such an illegal act. And no one, whether witness, prosecutor, police or defence lawyer, has the right to lie or intentionally mislead the court, whatever his 'instructions' are.

However, the pistol is still outstanding, and nothing tells me that it was reported as stolen or missing, as required under Section 41. The whole story might now elude us, but one day we all will know 'what a Glock a strike'.

- Dr Orville Taylor is senior lecturer in sociology at the UWI, a radio talk-show host, and author of 'Broken Promises, Hearts and Pockets'. Email feedback to columns@gleanerjm.com and tayloronblackline@hotmail.com