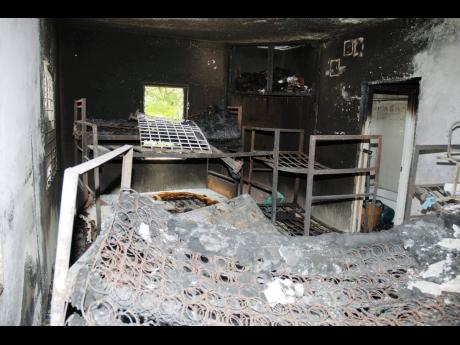 Contributed
On May 22, 2009, there was a fire at the Armadale Juvenile Correctional Centre in St Ann that resulted in the deaths of seven girls and injuries to several others.

For most of my life, I was a loyal carnivore. I hated all vegetables except broccoli, which only interested me because I had it ingrained in my head from childhood that they were trees and I, the big bad hurricane. I despised peas and so I had to spend extra time at the dining table, after Sunday lunch, unable to leave until I finished the pile of red peas I had picked out of the rice. If you know my mother, you know she doesn’t mess around.

But then things changed when the fire happened at Armadale. A year later, I decided to give up eating meat, so every day, every time I think of what to eat, I remember Armadale. I wanted to ensure the nine-day wonder didn’t happen and I wanted to raise awareness of the incident.

If anyone asked me how come I didn’t eat meat anymore, I would tell them why:

On May 22, 2009, there was a fire at the Armadale Juvenile Correctional Centre in St Ann, Jamaica, that resulted in the deaths of seven girls. There were 23 girls in a room which was meant for five people. The girls were given seven bunk beds and 14 mattresses in the room to sleep on. They had been on lockdown for two weeks prior to the fire, which meant they did not have access to education, recreation or the bathroom.

The police were called to the premises that night because the staff reported that the girls were being unruly. A tear gas canister was thrown into the room, which landed on a mattress and reportedly started the fire. The door to the room was locked. To date, no one has been held accountable.

Following a commission of enquiry, it was found that the fire was caused by a tear gas canister thrown by Constable Lawrence Burrell. However, he was freed of the charges after the Crown conceded that it did not have sufficient evidence against him.

During my first year away from home, I told over 700 people about Armadale. At the time I was living in the United States and I started to recognise a stark difference between the reactions of Jamaicans and non-Jamaicans. The non-Jamaicans generally had a sense of shock. The Jamaicans – not so much.

I will never forget the first time I heard someone say that they, the girls, deserved it. It was through this experience I realised how traumatised we are as a people, how normalised violence is and how we cope with it in order to get on with our days as humans at all stages – children in school, employees at work, families at home.

Then almost a year to the day of the Armadale fire was the Tivoli massacre, where over 70 people died at the hands of the State. Jamaica’s soul took a beating in the space of a year.

In truth, with our history of intense violence and gross violations of our rights and dignity, Jamaica’s soul has been taking a beating for several decades. Perhaps this was the straw that broke the mule’s back and placed us further along in our collective trauma, feeling helpless at the question – what can I do to stop this?

Even though it’s been hard to witness, I understand why year after year, as sure as day follows night, when I say the memorial of the Armadale fire is coming, I’ll get responses that can best be summed up in a sound – yawn. Yet still, it must be done.

So let me take a moment to interrupt your morning, afternoon or evening, your breakfast, lunch or dinner, in your home, at your office, or on the bus, wherever you are reading this, to remind you that today is the 10-year memorial of the fire at Armadale that claimed the lives of seven girls and caused lifelong injuries to many more. Let us remember the seven we lost, their families and friends and the survivors.

To anyone who believes that every child deserves love, respect and dignity, I ask you to pay attention. Because in the midst of the 10-year memorial of Armadale we must remember that the story continues and the first line of the next scene is already written, “Then there was the fire at Walker’s Place of Safety on January 16, 2018.”

Alexis Goffe is a human rights advocate. Email feedback to lexgoffe@gmail.com and columns@gleanerjm.com