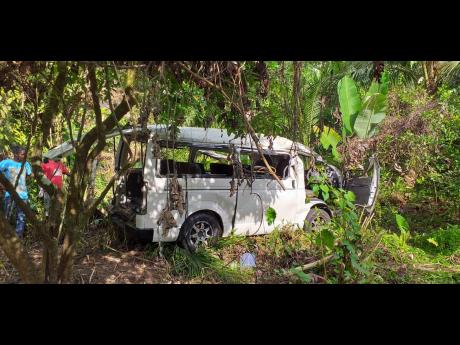 File
The ill-fated bus which crashed along the Black Hill main road in Portland last week, killing one student and injuring 26 other persons.

My heart goes out to the relatives, family, friends and the Titchfield High School community in Port Antonio, Portland, affected by the injury of several students/passengers, and the tragic death of 13-year-old Pranjal Jasti, a bright and promising schoolboy. The badly overloaded minibus that was transporting the victims failed to negotiate a corner at Black Hill in the parish and overturned into a ravine. I blame this horrible crash on the eat-a-food culture.

Some people might not realise that there are distinct differences between ‘eating food’ and ‘eat a food’. When someone tells you that they need to eat food, it only means that they are hungry and need to get food or need to earn money to buy food. However, if someone tells you that they need to eat a food, it usually has nothing to do with food. It usually means that they want to earn money, by whatever means and for whatever reason, or get their share of monetary handouts.

The need to eat food (hunger) is one thing, but the need to eat a food (hunger for money) is something else entirely. People who need to eat food usually work at a job, but people who want to eat a food either work at a job, beg, live off others, do unethical things or engage in illegal activities to acquire money. For example, some public transport operators break every traffic law/road code imaginable and consistently endanger the properties and lives of others just because they want to eat a food. I’ve even heard someone at the helm of a public transport entity openly declare that the police should take their need to eat a food into consideration and cut them some slack.

WHATEVER IT TAKES MENTALITY

Hired drivers are told to earn a certain minimum each day that goes to the owner of the vehicle. Then, because they need to eat a food, some of them do whatever it takes to get as many passengers as possible so that the rest of the day’s earning will prove substantial. Consequently, their indiscretions are limitless. They overload their vehicles, speed carelessly, drive dangerously, ignore traffic signs and lights, race one another for passengers, obstruct traffic and overtake entire lines of traffic, because they can’t afford to wait in line (like everyone else), and end up transporting relatively few passengers for the day.

In fact, they have brought about horrible degradation of the overall behaviour on our roads. Other drivers see what can be done, see what is done, see that public transport operators get away with that kind of driving 99.9 per cent of the time, so they pattern them. No wonder our crashes and road deaths remain high in spite of increasing fines and more ticketing by the police.

This ‘eat a food’, ‘do whatever it takes to survive’ mentality also justifies a multiplicity of unethical and criminal activities in other spheres of our society. Corruption exists everywhere, from the mendicants in the street to the Houses of Parliament. There is pervasive stealing and squandering of public funds from hard-working, tax-paying citizens and even major crimes are committed, all in the name of, ‘Wi haffi eat a food.’

Don’t for one moment believe that eat a food is restricted to those who are desperate to stave off starvation. This sort of thinking is often driven by greed or the desire for a shortcut to the acquisition of wealth. The eat-a-food mentality gives licence to youths who accept money to murder just about anyone, even their childhood friends. The eat-a-food culture starves Jamaica of discipline, safety and justice.