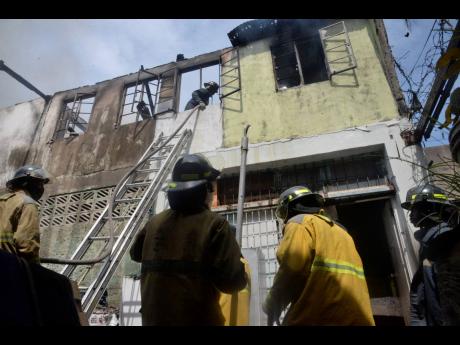 Firefighters from York Park Fire Station extinguishing flames from a building on Lawes Street, Kingston, earlier this month. The fire destroyed a six-room dwelling on the premises.

Last Friday, on these pages, Horace Levy began a comparison between the International Monetary Fund-induced stabilisation of the Jamaican and Grenadian economies. He showed how the Grenadians had invested heavily in their people’s progress and began to reap the dividends. By contrast, Jamaica’s social expenditure has been less impactful. Just check the education, health and social security budgets this fiscal year in relation to undeniable need. And ask what we have done with the giveback money.

Here is an instance of how this works out on the ground. A week ago, there was a serious fire on Lawes Street in the Tel Aviv area of central Kingston. The yard with multiple rooms was in a decrepit state, with no owner showing any interest for decades. This is the norm for thousands of dwelling yards across the nation.

One gentleman died in the fire – infirm and unable to escape. More than 20 others, including infants, school youths and peddlers, have lost everything except their lives and have nowhere to go, so they ‘cotch’; families are broken up, school missed, lives upended.

Sad, but inevitable, you say, when there is a disaster. But in this case there is little help and no recovery. A member of parliament will help with some food and toiletries and maybe a rehab grant, the local authority with some bedding and clothing. The nearby Missionary Church helped with clean-up and supplies. So has Patrick Sterling, a great-hearted born-yah now living in the USA. And give thanks for the assistance from Food For The Poor, the real ministry of relief, funded, by the way, not by own compassionate largesse, but by the charity of North American churchgoers. I shame! You shame?

Perhaps if we can get the ownership sorted out, Food For The Poor will help in a few months with one or two cottages, which will be a blessing but can never rehouse all those displaced. There is no insurance, no social security, and the National Housing Trust is not interested.

The truth is that under our system, we put most people last, not first – even when we have the money to do better and are fond of shouting “praasperty”.

Then on Tuesday afternoon, outside Gordon House, two mirasmic teenage boys were being draped up by the police for trying to rob a passing schoolgirl’s phone. They would be charged, probably beaten, given a sentence which will blight their already blighted lives; as a consequence, likely segued into a gang, at which time we will solemnly allocate billions to capture them or, more likely, to make duppies of them.

Well, you say, they deserve it all. Who told them to rob the phone in the first place. They have only themselves to blame. As we roar off in our refrigerated SUVs with outriders and sirens blaring, heading to the latest post-sectoral Wakanda-like party.

The political economy and its derivative social construct is sick. It puts the most vulnerable last, not first. It cannot take us to the sustainable, inclusive order of which the Vision 2030 speaks. We who lead may be trying our best and in futility measuring ourselves against the other side, but are still captured by the self-delusion that 1.5 per cent for the quarter can really cut it for inner-city squalor or rebel youth hopelessness.

Thankfully, all is by no means lost. Labour Day was, for me, redemptive. Move among the scores of women, trying for their children, accustomed to live and raise their youth without the help of a father. They have never known it otherwise. Yet, they reach out to share something, to clean up somewhere, to ask little and be satisfied with less.

And more: see traditional North Street rivals, Kingston and St George’s colleges, both alumni groups, in the spirit of Gibson, Wilson, Forrest and Carter, combining to make their common thoroughfare safer and, even more valuable, to bespeak a united front. Then to marvel at the Kiwanians, the Sandals, Marriot and Appliance Traders people, with some Campionites, refurbishing and equipping a people’s park for Southside. Pure goodwill!

So the call is for conservative social values and practices – yes, conservative rather than wasteful of human life and dignity: cherishing the concerns of the weakest, the burnt-out people and the misguided youth, never dismissive of solidarity. Economic policy and political practice ought to be the outgrowth of social philosophy.

We used to excuse our callousness about basic needs on the grounds that there was no money to give them priority. But now, Jamaica has a fiscal surplus of more than $20 billion. There are bank deposits of more than $1trillion, and probably triple that invested in securities. Then there are net international reserves of more than US$3 billion and pension funds with more than $700 billion. And there is more.

No one is proposing profligacy or handouts. These monies belong to ordinary people and should, in justice, be invested to uplift all of us, not just some.

There was never a valid economic, let alone a moral justification for putting most of our people last. In all events, we have the resources, both spiritual and material, to change that now.