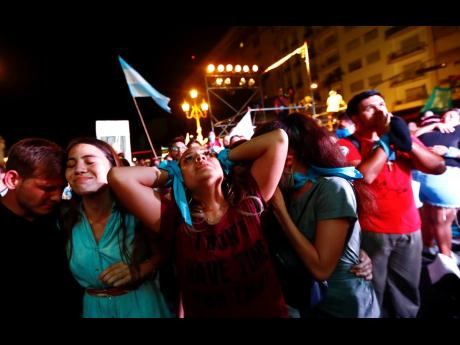 I am an avid and habitual listener to Nationwide News Network; ask my wife! But I must say that I am disappointed at how they are reporting the abortion issue.

In the wake of Argentina’s senate voting to make abortion legal, Jamaican parliamentarian Juliet Cuthbert-Flynn predictably renewed her call for Jamaica’s lawmakers to do the same here. And just as predictably, this newspaper and other members of the pro-abortion lobby have joined in.

Earlier this week, Nationwide This Morning interviewed MP Cuthbert-Flynn, and if that exercise was a cricket match, I would accuse the interviewers of bowling donkey drops. The programme avoided any serious discussion of the issues, and was basically a public relations exercise for Cuthbert-Flynn and the abortion lobby.

The main focus of the interview – taken up later by Cliff Hughes – was that the law criminalising abortion, being written in the 1800s, was antiquated and should be repealed, or amended to reflect modern times.

The legal or moral principle being put forward is that, by virtue of being a 19th-century law, it is outdated, and needs to catch up with modern times; the fact is – they argued – tens of thousands of abortions take place in Jamaica every year, and we need to recognise this by legalising abortion, instead of criminalising women and the doctors who assist them by terminating their unwanted pregnancies.

The argument is, of course, childish and laughable, as well as illogical.

The laws criminalising robbery, rape, and murder are older than the 19th century, and thousands of robberies, and hundreds of rapes and murders take place in Jamaica every year. Should we then apply the Nationwide principle to these offences and legalise them because they are antiquated, occur frequently, and criminalise the persons who perform them?

Good laws exist because the actions they criminalise are wrong in themselves, whether they take place in the 18th, 19th, 20th, or 21st centuries.

Here are some hard (and obvious) questions MP Cuthbert-Flynn could have been asked in the radio interview this week to engage the issues, but was not.

MP Cuthbert-Flynn: Anti-abortion lobbyists argue that human life begins at conception, when the sperm meets the female ovum. Do you agree? And if not, when, in your view, does human life begin? What do the sciences of biology and embryology tell us?

And if human life begins at conception, isn’t abortion murder?

Cuthbert-Flynn: Pro-abortion lobbyists argue that a woman should have the right to determine what happens to her own body. Is the foetus growing in a mother’s womb part of that woman’s body? How could this be if their DNA is always different, and maybe even their blood types are different?

Speaking for myself, I am male and my mother (God rest her) was female; was I a part of her body? I am blood type A+ and my mother was O+. I was in her body, but never a part of it. If a woman has the right to determine what happens to her own body, that would not apply to the different human being growing inside her.

The real issue behind the abortion debate (which is being avoided) is what used to be called ‘free love’. The real choice that pro-choice advocates wish to make freely is the choice to have sexual intercourse while avoiding the inevitable consequence of pregnancy. In pro-abortion circles, abortion falls under the subject of ‘reproductive health’, as if pregnancy is a disease.

Is this not just another form of selfishness, bowing at the altar of hedonism?

Is it a human right for men and women to engage in sexual intercourse just for the pleasure, while avoiding the responsibility of the consequences of their actions? Why do we not discuss the abortion issue in these terms? Why was this question not put to Cuthbert-Flynn?

We would not ask thieves to determine whether theft should be a criminal offence or not; that would be a conflict of interest. Because women have to physically bear unwanted pregnancies in their bodies, they may find it difficult to be objective about abortion.

Can we have a serious debate about the human issues of sex and abortion while avoiding ad feminem arguments?