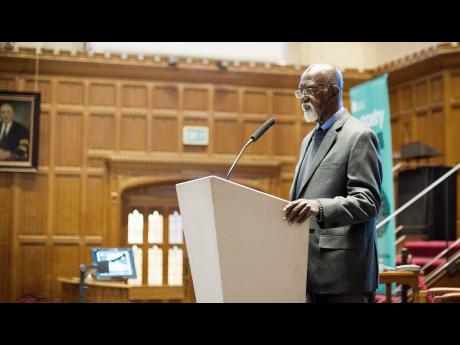 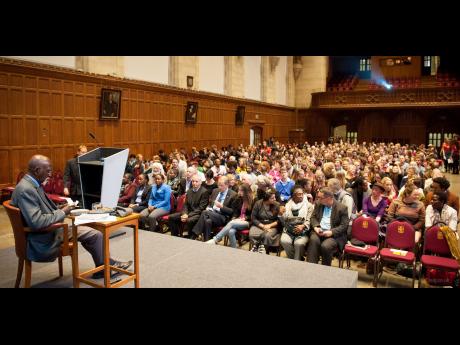 Jon Craig Professor Morris on the stage in the Great Hall of the Wills Memorial Building, Bristol, UK, earlier this month as he delivered the 2014 Bristol Poetry Institute's reading. 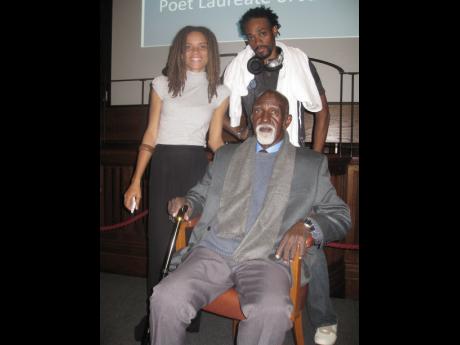 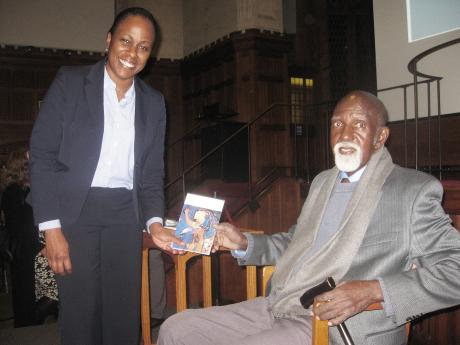 Save for coughs from various points of the large room, the packed Great Hall of the Wills Memorial Building in Bristol, United Kingdom, was quiet for an extensive reading by Professor Mervyn Morris earlier this month.

The Jamaican Poet Laureate delivered this year's annual reading at the Bristol Poetry Institute to an audience, which Asif Khan and Tangent Books' Richard Jones, co-organisers of the Jamaica Rising events, of which the reading was a part, summed up as "the largest turnout ever for a black poet/writer in Bristol. Easily, maybe by four or five times". The estimated audience was about 650 persons for the free reading.

Jamaica Rising was organised in collaboration with the Ministry of Tourism and Entertainment, part of which was its Arts in The Park event for spoken-word artistes held earlier this year in Kingston.

In an evenly measured

there were several pauses to select material, Morris read extensively from his collection On Holy Week, which includes the perspectives of Mary Magdalene, Thomas and Joseph, among others.

creative writing. I just want to do a little mischief," Morris said to chuckles before reading 'Short Story I'. Language was not a barrier in 'Eve' (The garden seemed a proper paradise/until she buck up on a serpent talking nice).

'North Coast Hotel' preceded 'Little Boy Crying', the latter centred on the grim visage a father has to maintain when disciplining his three-year-old, but the message has to be sent home - "you must not make a plaything of the rain".

Morris followed with 'Love Is', then the tone of the reading changed with 'Cabal', 'Case History Jamaica' and 'My Rodney Poem'. Morris connected the last with fellow poet Professor Edward Baugh, and said that it was in memory of the late Walter Rodney. He referenced Baugh's line, "he never even wrote a Rodney poem".

"When Walter Rodney was assassinated, there were a whole lot of Rodney poems. When Eddie was launching his book at the time, I wrote this one," Morris said, going on to read a poem about a man who "lived a simple life" and concluding "he died too soon".

Morris concluded his reading with 'The Day My Father Died' and 'A Chant Against Death', concluding his Wills Hall reading with, "say see you soon" to extended applause.

After the reading, Professor Morris was kept busy signing books for a steady stream of persons.