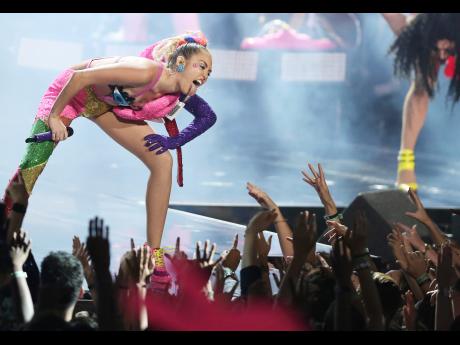 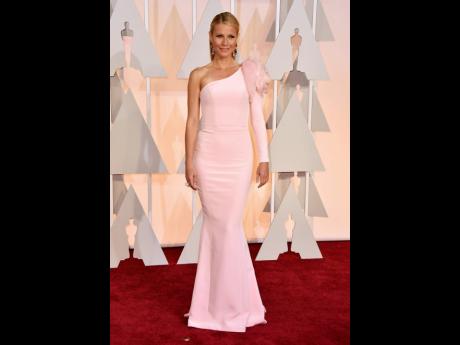 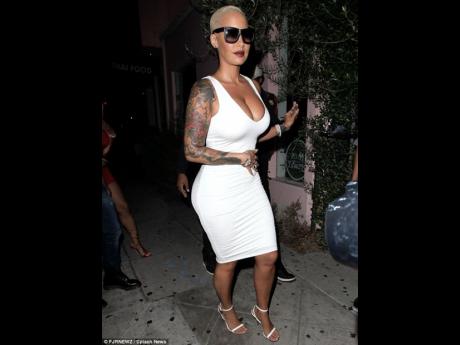 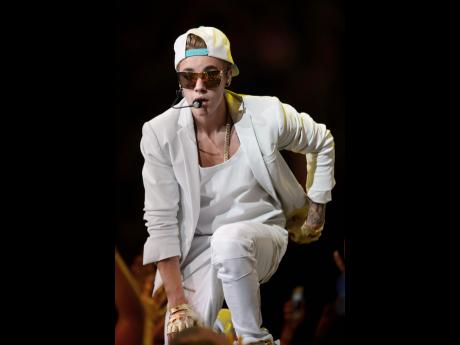 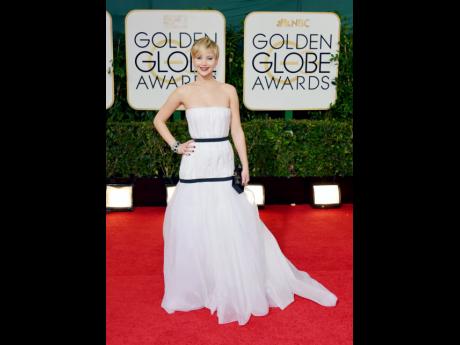 Miley Cyrus broke down in tears while singing on Saturday Night Live over the weekend.

The 22-year-old, who hosted the US comedy sketch show's season premiere, couldn't help but shed a few tears while singing The Twinkle Song - an ode to some of her dead pets. Miley performed the emotional song while playing piano, and there was even a heart-shaped frame containing a picture of her dead dog, Floyd, perched atop the instrument.

The singer struggled to hold back her tears and completely broke down as she reached the end of the song.

Elsewhere in the eventful episode, Miley and the cast of SNL cracked jokes about Lenny Kravitz's recent genital exposure, Ariana Grande's doughnut-licking saga; and she even faked an orgasm in scenes reminiscent of When Harry Met Sally.

Last year, Miley mourned the death of her beloved husky Floyd, who was killed by a coyote in April 2014. At the time, she tweeted: "I know I don't mean it, but I wish he would've taken me with him this is unbearable. What am I gonna do without him?"

Amber Rose has forgiven Kanye West and Wiz Khalifa for their hurtful comments about her.

The 31-year-old star hosted her first-ever SlutWalk event in Los Angeles on Saturday, in protest of slut-shaming and other vicious comments directed at women. She opened up about her own experiences, breaking down in tears over the rappers' previous digs.

Speaking about ex-husband Wiz, with whom she has two-year-old son Sebastian, Amber admitted it was "extremely hurtful" to hear him refer to her as just a "stripper". She sobbed: "[Wiz] went on to make a song saying that he fell in love with a stripper, but fell out of love quicker. As you can imagine, him being the love of my life, regardless of us going through a separation or not, it was extremely hurtful."

Amber says the See You Again hitmaker, 28, has already apologised to her for the mean lyrics, adding: "Wiz actually apologised to me already, so I have forgiven him."

The stunning model is also eager to forgive ex-boyfriend Kanye, 38, who previously claimed he had to take "30 showers" before dating current wife Kim Kardashian West to get Amber out of his system.

She said: "I want to forgive Kanye about what he said about me. I want to let all of that negativity go."

Meanwhile, Amber's mother, Dorothy Rose, appeared to take her own swing at Kanye by holding up a sign that read 'F**k yo 30 showers'.

Television producer Brad Falchuk, who is dating the Hollywood starlet, briefly spoke about his blossoming new romance at the premiere of American Horror Story: Hotel in Los Angeles. Brad, who is the producing partner of Gwyneth's pal Ryan Murphy, said things with the actress are going "very great".

He added: "She's awesome. That's what everybody loves about her."

Despite appearing on his previous show with Ryan, Glee, fans shouldn't expect to see 43-year-old starlet appear on the new season of American Horror Story, as Brad is eager not to mix his professional and private lives.

Quizzed whether Gwyneth may join Lady Gaga on the show, he told PEOPLE.com: "I think I like to keep things separate."

The two were first linked in August 2014 after Gwyneth announced her split from Coldplay frontman Chris Martin, with whom she has daughter Apple, 11, and son Moses, nine, after 10 years of marriage. Last month, the Iron Man 3 actress appeared to confirm she is dating Brad, after posting a picture of the pair of them on her Instagram account.

Alongside the image of herself cosying up to her beau at the Scream Queens premiere, the Oscar winner wrote: "My date and I #screamqueens."

Jennifer Lawrence was "dead inside" on the last day of filming The Hunger Games franchise.

The Oscar-winning actress, who has spent the last five years playing Katniss Everdeen in the hit fantasy movies, admits she couldn't control her emotions when the final film - The Hunger Games: Mockingjay Part 2 - completed shooting in East Berlin, Germany.

She told Entertainment Weekly magazine: "It was so emotional that I was completely numb and dead inside."

As for Jennifer's co-star, Liam Hemsworth, the Australian hunk has revealed he was drunk on the final day of filming. Liam, 25, and co-star Josh Hutcherson, 22, had already finished shooting their last scenes the day before and indulged in a bottle of scotch before returning to set the next day.

Josh said: "Then [the next day] we came to the set because Jen and Woody [Harrelson] had a last scene together, and we wanted to watch the last couple takes. Then they called wrap, and we kind of sat there on the steps in this room, and we just held each other."

While the trio said a tearful goodbye, good-humoured Jennifer, 25, admits they were reunited just a week later. She quipped: "And then a week later, we were all together and we thought, 'Was it weird that we got so dramatic?'"

Justin Bieber's recent boozing on stage was a 'one off', according to his pal.

Rapper Riff Raff believes the Where Are You Now? hitmaker, who hit the headlines this week for smoking marijuana and guzzling brandy on stage in New Zealand, is still committed to cleaning up his act.

Riff told TMZ.com that he recently hung out with Justin, 21, and producer Diplo in Hollywood, where he is recording his new album, and Justin didn't smoke marijuana or drink any alcohol while he and Diplo were "f****d up".

He also claims the trio later went to a party and Justin remained sober the entire evening.

The Canadian singer sparked fears that he had reverted to his old ways with his antics while performing at The Stage in Auckland on October 1. Riff Raff says his pal may have fallen off the wagon on the night, but thinks it was just a one-off.

In video footage from the gig posted online, Justin is seen swigging from a Cognac bottle and dousing the stage with the alcoholic drink.

Clearly amused by the clip, which was shot by a fan and uploaded online, Justin shared the video on his own Instagram account, admitting he was "drunk."

The What Do You Mean? hitmaker, who was arrested for driving under the influence (DUI) in Miami last year and tested positive for marijuana, allegedly later struck up a 'joint' on stage, according to gossip website TMZ.com.

Avril Lavigne and Chad Kroeger have been working on new music together.

The estranged married couple, who announced their split last month, seem to be on friendly terms as the Hello Kitty singer posted pictures of her and the Nickelback star in the studio together.

Avril posted a picture of Chad holding a guitar on her Instagram and wrote: "Back where it all started ... (sic)". She captioned another picture: "YeeHaw! Writing with Chad today (sic)"/

The 31 year-old singer appears to have maintained a good relationship with her former husband, following her announcement the pair have split but plan to remain "the best of friends".

Announcing their separation on September 2, Avril wrote in a statement: "It is with heavy hearts that Chad and I announce our separation today. Through not only the marriage, but the music as well, we've created many unforgettable moments. We are still, and forever will be, the best of friends, and will always care deeply for each other. To all our family, friends and fans, thank you sincerely for the support."

Avril and Chad got married in a French castle in July 2013, but rumours about their marriage being on the rocks began spreading in 2014.

A source said: "Honestly, she's doing OK. This has been in the works for awhile. "Chad is being supportive. At the end of the day, they just didn't see eye to eye on a lot of things."