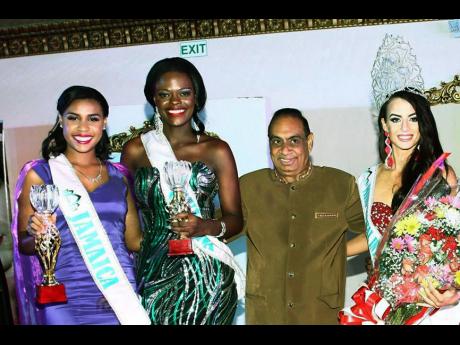 Twenty-six-year-old Asheigh Andrews of Perth, Australia, edged out Jamaica's Gillian Parague to win the prestigious 2015 Miss Global International title in a contest which was staged in the twin-island Republic of Trinidad and Tobago between September 22-25.

"It was a fantastic experience ... the support was unbelievable," said founder of the event and renown pageant personality Lachu Ramchandani. "All the girls represented well and it was nice to have Caribbean girls taking two of the top three places."

Andrews, who was quite a popular contestant from the outset of the contest, came out on top of all the judges' scoresheets. In addition to the main title, she also walked away with the awards for Best Swimwear and Miss Congeniality.

Among the many prizes Andrews won in topping the field of 21 contestants, was a trip back to Trinidad and Tobago during Carnival. The package includes airfare, accommodation and Carnival costumes.

Parague, who Ramchandani said put up a very strong showing, and third-place finisher Miss Guyana, Alicia Bess, also walked away with substantial prizes, albeit that the most sought after title of Miss Global International eluded them.

Over the four days of hectic activities, the contestants competed in several segments, which included swimwear, talent, evening gown, intelligence and the question-and-answer segment on the night of the coronation. The swimsuit and talent competitions were held prior to pageant night, while the pre-interview segment was done on the morning of the pageant.

With Trinidad and Tobago turning out to be an overwhelming success story for the organizers, the focus will now switch to the island of Mauritius, which will be the host nation for the pageant's 2016 staging. The pageant is, however, slated to return to Trinidad and Tobago for the 2017 staging.