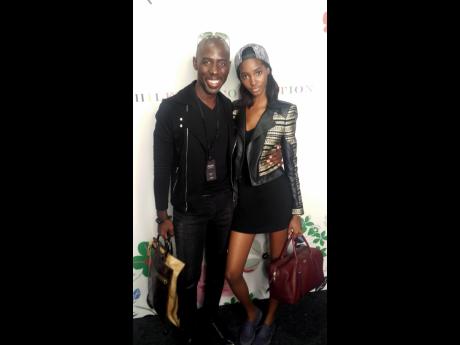 According to vogue.com, "Over the past year, Jamaica has proved to be an undeniable influence on the modelling industry. You'll find Jamaican faces on the runway for nearly every major designer and posing for fashion's leading photographers, and the latest generation of talent has been racking up work with the industry's power players. Tami Williams and Kai Newman appeared side by side in the pages of Vogue and made waves on the runway for Alexander McQueen and Valentino, while newcomers Brandon Bailey and AndrÈ Doyley were among Spring's most-talked-about boys, snagging coveted exclusives at Prada and Calvin Klein Collection, respectively. Williams, Newman, Bailey, and Doyley are indicative of the wealth of beauty to be found on the island and the keen eye of Deiwght Peters, founder of Saint International, the agency responsible for the discovery and development of many of Jamaica's rising stars."

"To say this is every agent's dream would be a gross understatement. Getting an American Vogue feature is the apex of achievement for any agent or agency. This is the absolute perfect gift for our 15th anniversary," quipped an understandably excited Peters. He revealed that this has been in the works for several months after the consistent achievements of multiple Saint models.

For Peters, it's never about the glamorous spotlight, but activating the agency's tag line, 'Changing lives and expanding horizons'. Indeed the story of Kai Newman, from the often-volatile area of Allman Town, gives credence to the essence of the brand. Discovered walking home with her mom from the dentist, she has already appeared in campaigns for Kenneth Cole, Tommy Hilfiger and Maybelline. Tami hails from St Elizabeth and is proud to be able to assist her mom with school expenses for her younger siblings.

"For me, seeing the young men and women experience what was once impossible dreams and able to change the lives for themselves and their families gives me greatest satisfaction," Peters shared.

While this global recognition from Vogue.com is the biggest, Saint has enjoyed remarkable profile over the years. In 2005, the agency was featured in V Magazine among the top agencies across the world. In 2010, V Man Magazine again featured the agency's men's division among the best international agencies.

No doubt the implications for such an endorsement is far-reaching. "This certainly has reinforced our position with our international partners. For one, Saint International is now on the lips of all the important fashion insiders. Second, it augurs well for the Jamaican fashion industry as the global profile of these models will bring high-level media and production crews to the island."