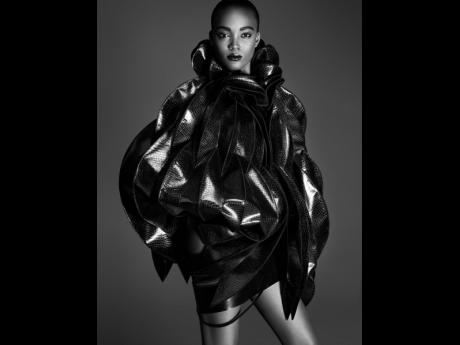 Pulse star Francine James is featured in December's German Vogue, which goes on newsstands this coming week. The exquisite shoot for the world's premier fashion publication was shot by Luigi and Iango, with styling by Patti Wilson. Make-up was by Virginia Young and hair was also by Luigi and Iango.

The German Vogue story is a massive step forward for Francine, who only entered the international market this year. Vogue now means new doors opening for the young Jamaican, who will seek to emulate her fellow Pulse stars who have shot Vogue, including Jeneil Williams, Lois Samuels, and Sedene Blake, who have been Vogue cover girls.

Naturally, both James and her agency Pulse, which discovered, developed and promoted her, are elated and excited.

James spent the first half of the year on a whirlwind tour of Europe. Having walked the Paris runway at the collections in February, she undertook assignments for several clients before shooting Vogue.

James, who was the winner of Pulse's Caribbean Model Search in 2013, was also the face of the last Search For The Million Dollar Girl TV show, which aired on TVJ this summer. Earlier this year, she appeared in editorials, campaigns and promotions for 1981, ESPRIT, John Lewis, Vlisco, Ahlens, LNDR, Todd Lyn, Vanessa Steward, Marios Schwab, Faith connection and Olympia Letan, among other assignments for various clients in Europe.

James is clearly living up to her promise as a very special talent. Last year, on a Pulse agency visit to New York, she was offered a contract by more than a dozen of that city's finest model agencies, which in fact, was every agency which met her.

A cover girl at age 16, James shot the cover and several pages of British travel glossy, Suitcase. No mean feat for a youngster who was still finishing high school at the time. Now she has a spectacular international career ahead of her.

Like so many other Pulse stars who have gone before, including the likes of Angela Neil, Jaunel Mckenzie, Jeneil Williams, Nadine Willis, Kimberley Mais, Oraine Barrett, Lois Samuels, Romae Gordon, Nell Robinson and Carla Campbell, Pulse chairman Kingsley Cooper, has a direct connection with James, having discovered her at school himself, and having also introduced her to the international market personally. Seventeen-year-old James, hails from Manley Meadows in Kingston. But she is not just an extraordinary beauty, she is also a study in discipline and academic application. A graduate of the Camperdown High School, James earned nine subjects at the CSEC level.