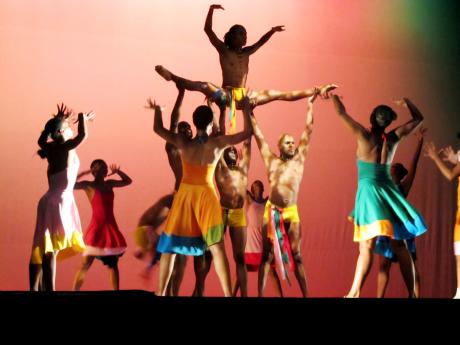 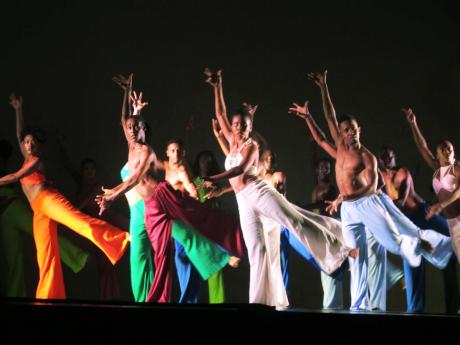 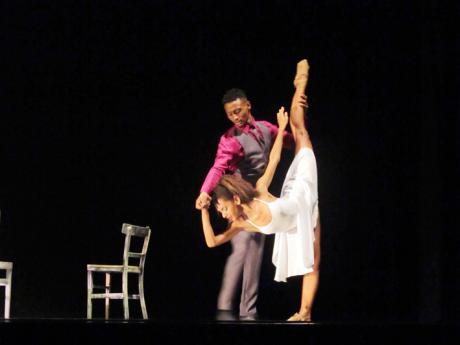 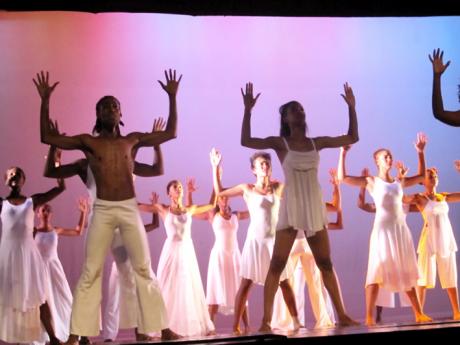 Marcia Rowe
Another scene from 'One Day', choreographed by Solomon Dumas. 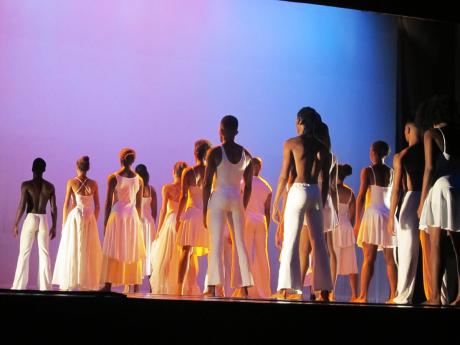 Marcia Rowe
Solomon Dumas' 'One Day' (2015), one of the new dances for The Company Dance Theatre's 27th season, staged at the Little Theatre, Tom Redcam Avenue, over the wekend. 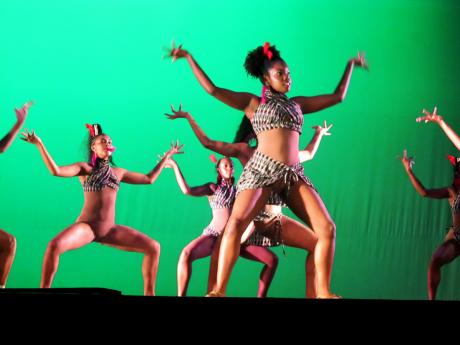 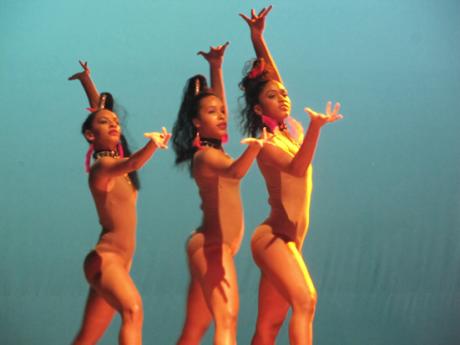 Falling between the landmarks 25 and 30, a 27-year anniversary may not be considered by many persons to be a significant milestone. However, it seemed that The Company Dance Theatre did not get the accustomed script. So they premiered five strong dances for their 27th season of dance, titled 'The Rising', which opened on Friday at the Little Theatre, Tom Redcam Avenue, St Andrew.

Except for a few costume glitches, the opening show was a collage of excellent technique, precise body extensions, control and uniformity in movement. Choreographers Solomon Dumas, Yannick Lebrun, Renee McDonald and The Company Dance Theatre's artistic director, Tony Wilson, seemed not to be satisfied with that. So, with some creative boldness through dramatic entrances, exits and lifts, they pushed the dancers and were rewarded with applause from the audience.

Wilson was responsible for three dances in the creative onslaught, starting with 'Prism' (choreographed in 1999). Presented in several movements, the beautifully choreographed dance saw Wilson drawing on elements of Indian dance, including twisting of the wrists and fingers. The costumes were also interesting. The dancers appeared in basic leotards and tights in the first movement, but gradually added bits of clothing and ending up wearing long, flowing skirts in the last movement.

Wilson's 'Dissonance' (2015) and the season's title dance were just as creative. In 'Dissonance', the choreographer incorporated a set, but while Lindsey Lodenquai and Steven Cornwall's movements were captivating, their passion made the dance even more powerful. They depicted the turmoil in the characters' relationship with great conviction. Unfortunately, however, the sofa in the set, unlike the two chairs, was not utilised.

In 'Rising', Wilson was bolder in his creativity, fusing a variety of lifts and formations to produce an interesting and exciting dance which was a fitting closer.

McDonald went for creative boldness of a different sort in 'The Cellar'. From its opening to the end, the dance epitomised the dramatic. 'The Cellar' began with a very brief scene, soloist Shari Jackson placed n front of the curtains to the audience's left. Soon after the stage door opened and, with a shriek, the character "is pulled back as the last of the missing persons is thrown into the cellar or the basement, where the kidnapper is keeping them", McDonald later explained.

As the dance progressed, there was conflict within the character and among the women involved. The passion and social commentary continued in guest choreographers' Dumas and Lebrun's 'One Day' and 'Destiny' respectively. Both are members of the Alvin Haley American Dance Theatre.

Lebrun, who is French-Guyanese, said 'Destiny' is "about this community of people trying to get somewhere, when the borders are difficult to cross, whether trying to get to a different city or different country or to cross a river or cross a sea or cultural barriers".

Dumas used the music of John Legend and Bobby McFerrin, as well as the 23rd Psalm, to show militancy against oppression. He told The Gleaner that the inspiration for his dance came from the soundtrack to the movie Glory, "Because it speaks to what is going on in the world today, particularly, on a personal note, me being a black American..."

Also influencing him were the incidents in the USA that sparked the Black Lives Matter movement.

'One Day' was just as compelling. It began with images of the dancers as ancestors, clad in white, making brisk entrances and exits while bells pealed. The second movement had Renee McDonald dancing to a prayer for protection; and in section three, the choreographers and his dancers spoke about current events.

Also on the programme were brief remarks from a representative of the American International School of Kingston, the evening's honorary chair, Terri-Karelle Reid, and a fine opening performance by the students of The Company Dance Theatre School.

Friday's opening was the first of three nights, two of which were fundraisers. In December, members of the company will be heading to Florida for a show.