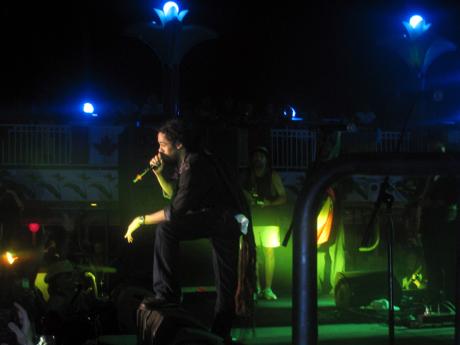 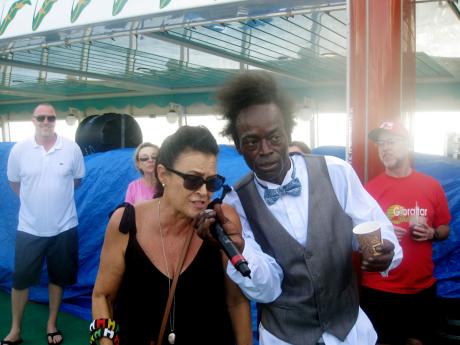 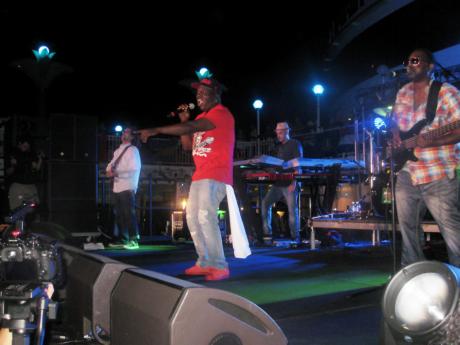 Mel Cooke
Barrington Levy performs, along with members of his band. 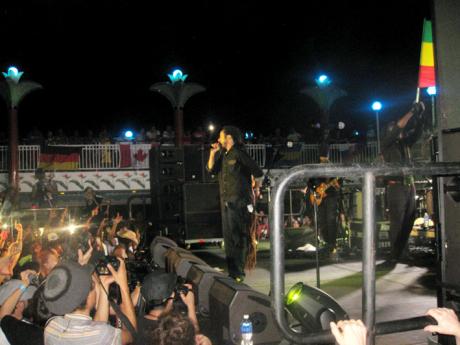 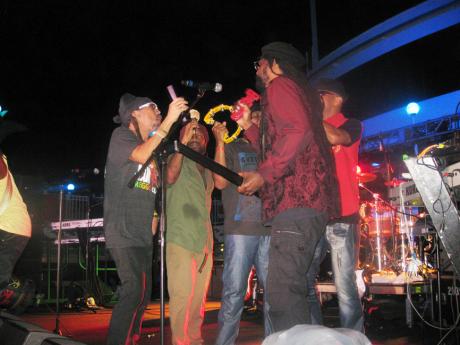 Damian 'Jr Gong' Marley was as much a gracious host as a standout performer as he closed last Thursday night's concert segment of the 2015 Welcome to Jamrock Reggae Cruise.

Anchoring the penultimate night of live performances aboard the Norwegian Pearl for the cruise's first of two consecutive reggae-based voyages, Marley reserved the song which has given the annual cruise its name for his set, after an inevitable - but still richly deserved - recall to the main stage on the Norwegian Pearl's 12th level.

"Thank you for supporting reggae music. I have not had a chance to meet with many of you, but tomorrow I will be doing a meet and greet," Marley said. While it would have been impossible for him to personally speak with everyone in the bumper crowd which cheered on the extended performance, Jr Gong bestowed Welcome to Jamrock on all within earshot, following with his part of the Khaki Suit duet with Bounty Killer.

Road to Zion, recorded with Nas, had come before the sung greeting and Marley also honouring his father in the later part of the set with Could You Be Loved and Get Up, Stand Up.

With a catalogue which extends from a bit before the Half-Way Tree album through to 2005's Welcome to Jamrock and Distant Relatives, a combination project with rapper Nas, and more recent singles like Gunman World, Damian Marley had a wide range of material and moods to choose from. And he did, putting together a set with good pace changes and thematic variety.

Notably, from the number of combination options which he has, Marley opted for only Cham (who had had a superb set earlier) to join him on stage, ably carrying the concert himself.

It was a high quality night, Cham mainly holding a steady dancehall pace in lockstep with the band and appealing to the women with the lyrics of Vitamin S and other sex-related material, which the ladies lapped up. Layered upon that were his slick dance moves to create spikes in the squealing. Added to the mix was a set of push-ups before he did Stronger, Cham beating his chest as he declared his fortitude which seemed as much physical as well as his character.

With Lawless emblazoned on his cap, some unruliness was not to be left out, Cham urging the audience on to say the Jamaican words outright after he deejayed "que sera".

Barrington Levy was in spanking vocal form, mainly staying in a small area at the front of the stage and delivering hits from the opening Living Dangerously, through to emphatic closer Broader Than Broadway. Enhancing extended versions of hits like Black Roses, Murderer (for which he did the Beenie Man deejay section in the remake) and Under Mi Sensie, Levy worked in lockstep with the band, urging on the willing crowd in united, rhythmic calls for more.

Levy was not reticent about claiming his place in Jamaican popular music, declaring himself a dancehall pioneer before delivering Dancehall Rock.

Third World, utilising a stand-in for lead singer A.J. Brown and who contributed an extra guitar to the band's sound, had an appropriate song as the ship moved away from Ocho Rios, St Ann, Jamaica falling astern to the strains of Reggae Ambassadors. Many saw Jah Glory in the evening sun and Third World showed its musical strength in Stephen 'Cat' Coore's cello work (he included Redemption Song) and drummer Tony 'Ruption' Williams' hand drumming, his bandmates uniting around a single microphone with percussion instruments.

The band hit an uptempo surge close to the end of their set with Try Jah Love and Now That We've Found Love, after 1865 (96 Degrees in the Shade) had a sobering effect on the audience.

The main stage performance was followed by a three-way sound clash featuring Bass Odyssey, Mighty Crown and Metromedia, which Bass Odyssey won under very controversial circumstances. In the party area in the Atrium, ZJ Liquid, Foota Hype and Rassarella were on the bill.

During a Friday afternoon performance on the Tahitian Pool Deck of the Norwegian Pearl, Shinehead made another Marley connection, spotting Cindy Breakspreare as he sang while walking through the crowd. He urged Damian Marley's mother to sing along with him on Beres Hammond's Tempted to Touch, which she did.