‘The Wedding Party’ a window into Nigeria 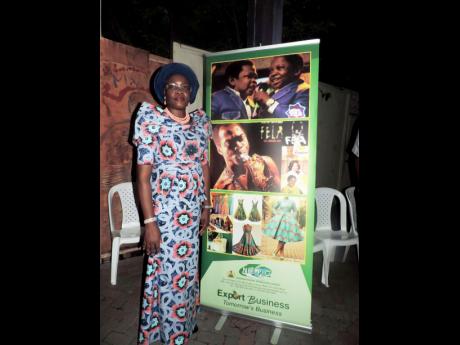 The invitation to Saturday's film screening at Redbones in New Kingston was to a Naija Night and ('naija' a word for Nigeria, which also expresses pride and strength), and some of the country's products were duly on display at the rear of the audience area. But while the night's focal point was The Wedding Party, shown on large screen, Nigeria's High Commissioner to Jamaica, H.E. Janet Olisa, made it clear that the look at Lagos (where the film is set) was also an insight into business opportunities.

"You can't think of culture without thinking of trade," Olisa, who has been posted in Jamaica for half a year, said, emphasising trade relationships between Jamaica and Nigeria.

"It is very important. I want to bring people together. We have one culture," Olisa told The Gleaner, noting that the commonality remains despite changes over time. "But the thing I am trying to do is bring Nigeria closer to Jamaica." With some Jamaicans already watching Nigerian films, Olisa is planning ahead to a full-fledged festival of films from 'Nollywood', as the Nigerian film industry is widely called. The invitation will be to a sector which, she said, already knows that Jamaicans are into Nigerian movies.

The business of movie-making apart, there is the image of Nigeria, which is projected, and Olisa said that when people speak about Africa, she reminds them that it is a continent, with Nigeria being one of over 50 countries. "There needs to be an understanding," she said. "That is something I want to see. The movie we saw was set in Lagos, which has over 20 million people."

There is also the matter of how African countries tend to be portrayed in news media, and, referring to the film's setting, Olisa asked, "Does that look like a backward country? No." The high commissioner said that through film, persons can experience Nigeria, although it is not first-hand.

The Wedding Party centres around a young couple's ceremony, the interaction between their respective families, the wiles of one of the groom's many former lovers who make a play for him on the wedding day, the virgin bride's doubts about her intended's resistance levels, revelations of financial troubles, and a hilarious armed robbery attempt. The mix of drama, romance, and comedy held the attention of the large audience, many members of which were dressed in clothing from Nigeria. Olisa said that The Wedding Party was chosen because of its varied facets and hence wide appeal, but also because it is about the strength of relationships - like the ones she intends to build.

"At the end of the day, that is what played out," Olisa said.