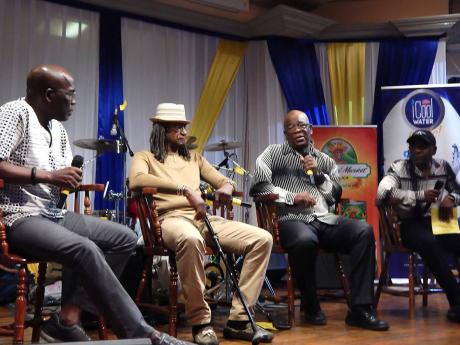 The Jamaica Music Museum 2020 Grounation Series ‘Blackhead Chineyman: The Chinese Contribution to Jamaican Popular Music’ is in its third week, and audience response has indicated that the staple event of Reggae and Black History Month has lived up to its expectations. This Sunday, Week Three, promises to be equally as worthwhile for people wishing to gain insight into the history and value of Jamaican music. Moderated by Wayne Chen, the series will explore the Randy’s, VP and Top Deck Record story with principals Pat, Clive and Chris Chin.

Last Sunday’s edition, ‘Hookim Hook dem; Channel One Cook Dem’, attracted a full house at the Institute of Jamaica Lecture Hall. The series, which pays homage to the Chinese contribution to Jamaican popular music, unpacked the story of the Maxfield Avenue-domiciled Channel One Recording Studio.

Drum wunderkind Sly Dunbar took the stage to lead the Channel One house band, The Revolutionaries, through several instrumental hits, including MPLA, Death in the Arena, and M16. He then called a medley of popular melodies and hit riddims, which had the audience singing the lyrics of Dennis Brown’s Revolution, The Tamlins’ Baltimore, and Black Uhuru’s Guess Who’s Coming to Dinner, General Penitentiary, and Shine Eye Gal. Sly then launched some choice dub mixes like Ballistic Affair and Far East that brought even the most hidebound to their feet. The band then backed reggae veterans Judge and Tabby Diamond of The Mighty Diamonds in a stellar performance of I Need a Roof, When the Right Time Come, Have Mercy, and Pass the Dutchie to close out week two.

When quizzed about the inspiration for his inimitable drum style, Dunbar was quick to say: “I play me. Back then I couldn’t even afford to go to school to learn the music, so I learnt it there [Channel One] and I just played me.” Like Dunbar, the other panellists spoke unabashedly about the studio as an institution of learning – not just music but life skills – shaping their collective and independent futures into who and what they are today.

Grounation takes place at 2 p.m. at The Institute of Jamaica’s Lecture Hall at East and Tower streets in downtown Kingston. Live music closes all sessions of Grounation.