The story of the Wolmer’s school song ‘Age Quod Agis’ 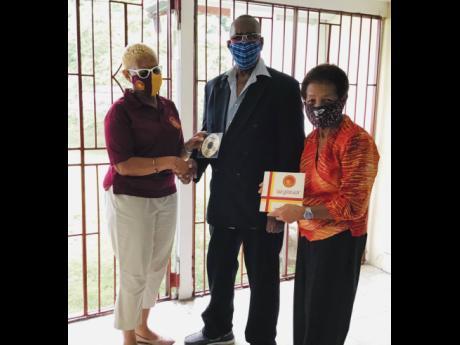 Everyone knows Norma Brown-Bell as a broadcaster extraordinaire and a Wolmer’s old girl who doesn’t stop repping for the maroon and gold. But the dynamite of a lady is also a record producer. It doesn’t matter that she has produced only one record to her credit. As they say, once is enough.

Three guesses would be far too many to figure out that one song made Brown-Bell go into the studio and get hands-on. It was Wolmer’s school song, Age Quod Agis. “It’s such a beautiful song, every time I hear it, I just can’t stop singing it. I love it, I love it, I love it,” she told The Sunday Gleaner excitedly of the song written by the late Phyllis Khan. “Phyllis was a great musician, and the piano was one of her instruments. In the late ’70s, she said she had a song in her head, and she wanted to put it down as a school song,” Brown-Bell recounted.

Of course, with Brown-Bell as her cheerleader, the song was finished, and then came the question, “What are we going to do with it?” The answer, “Why not get it recorded?”

And that’s when Brown-Bell drew for the producer’s cape she didn’t even know she had. In fact, after the first voicing of the song on a 45 record, as was the norm back in the days, there was a second production to commemorate Wolmer’s 250th anniversary in 1979.

Brown-Bell negotiated for studio time at Byron Lee’s Dynamic Sounds on Bell Road in Kingston, where the combined choirs of the Wolmer’s Girls and Boys, along with their choir directors, worked their magic. The studio engineer was Neville Hinds. It was upgraded to a CD and made available for purchase at the grand 250th celebration.

“We took a lot of studio time, and we didn’t pay a cent, and Speedographic Printers did the printing of the jacket. This school song is so important that no event at all takes place without it,” a proud Brown-Bell shared.

She added, “We never had a school song before, and so we were ecstatic when Phyllis made it. From you reach prep school, you have to sing the school song. Every morning we have to sing it.”

Brown-Bell, who is always on a charitable mission for Wolmer’s, recently assisted with organising a telethon, partnering with Television Jamaica, to raise money to buy laptops for her beloved alma mater and two schools in Allman Town. So far, US$60,000 of the US$100,000 goal has been realised. Wolmer’s is the oldest school in the English-speaking Caribbean.

Our School We All Love Dearly,

We Think It Is The Best

Maroon And Gold Our Colours,

The Rising Sun Our Crest

Our Motto Means At All Times,

We Try To Do Our Best

At Home, At School, At Work, At Play

We Put It To The Test

On Maroon And Gold The Sun Won’t Set

Try To Do Your Best, Put It To The Test

To Those Who Love And Train Us,

We Owe A Special Debt

To Self We Owe It Also

And It Must Never Set

Our Hopes And Aspirations Placed As High

As They Can Get

Our Efforts Must Be Constant

In All Things Big And Small

The Rising Sun Our Target

Our Standards Must Not Fall

Our Motto Means A Great Deal,

It Is For One And All

The Home, The School, The Nation