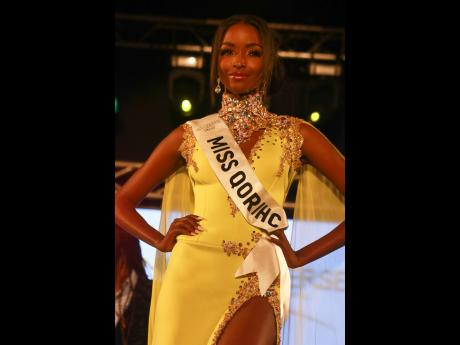 Contributed
Miqueal-Symone Williams, who was crowned Miss Universe Jamaica in December 2020, will compete at the 69th Miss Universe pageant in May. The event will be held at the Seminole Hard Rock Hotel and Casino in Hollywood, Florida.

Organisers of the local Miss Universe Jamaica (MUJ) pageant are excited following the announcement of a date for the Miss Universe pageant.

Miqueal-Symone Williams was crowned Miss Universe Jamaica in December 2020 in a virtual coronation that was neither public nor live, owing to the coronavirus pandemic. At the time of her crowning, no date had yet been announced for the 69th Miss Universe pageant.

“It is good news to finally get confirmation from the Miss Universe Organization regarding date, host city, venue,” said Mark McDermoth, co-franchise holder of MUJ.

After a year and a half, the Miss Universe competition will return with a live telecast on May 16. The event will be held at the Seminole Hard Rock Hotel and Casino in Hollywood, Florida.

McDermoth said he is confident Williams will be safe, and pleased with the chosen location and how the Miss Universe Organization has handled the Miss USA pageant, which is also under their purview.

“We are happy that in the heightened local and worldwide challenges of the pandemic, at least the host city is nearby, and Miqueal-Symone does not have to travel a great distance to compete. The finals are in Florida, which has been particularly hard-pressed with the spread of the virus; however, as we’ve said previously, we felt that the MUO handled the recently concluded Miss USA pageant very effectively regarding COVID-19 protocols and adhering to general safety regulations, and apparently the MU competition will be executed on a similar basis, so we are confident that she will be safe,” he said.

Williams’ preparations for the pageant continues in earnest. “We have already started expanding and accelerating Miqueal-Symone’s training programme, and she has been improving tremendously, so we will maintain that momentum until her departure in early May,” McDermoth told The Gleaner.

The last Miss Universe pageant was in December 2019, and its winner, Zozibini Tunzi of South Africa, has worn the crown longer than anyone else.

It’s still under consideration whether a limited audience will be permitted to watch in person.

The Miss Universe competition will air in more than 160 territories and countries across the globe. In the United States, it will air in Spanish on Telemundo, and the English-language broadcasters will soon be announced.