She was designed for him 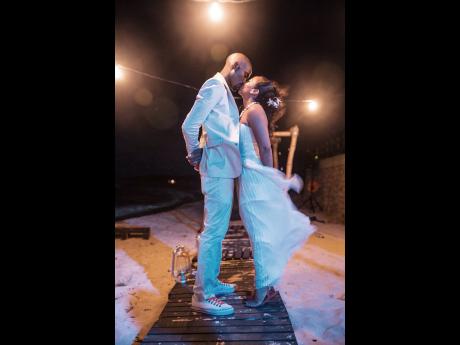 Teino, clad in his tan casual suit, made by Carlton Brown, enjoys a kiss from his bride, Suelan, in her beach-appropriate BCBG Maxazria strapless silk/off white gown. 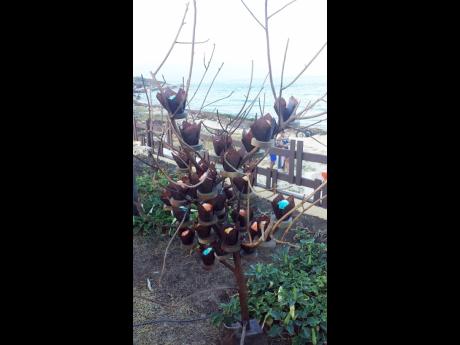 This 'cupcake tree', made from an actual tree, was filled with sweet treats curtsey of Tamara Malcolm's Jus' Cupcakes. 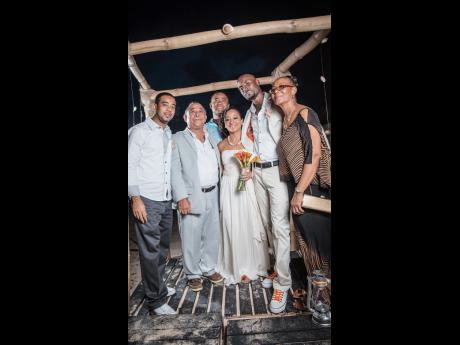 From left: The bride and groom pose with members of the bride's family - Ryan (brother), Merton (father), Kiplin (brother) and Patricia (mother). 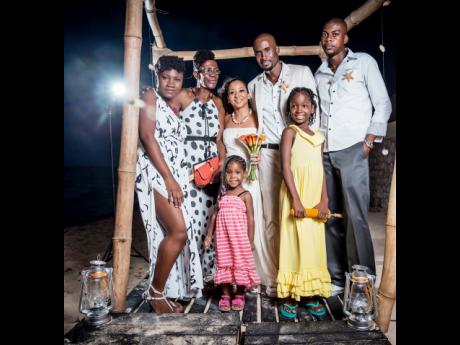 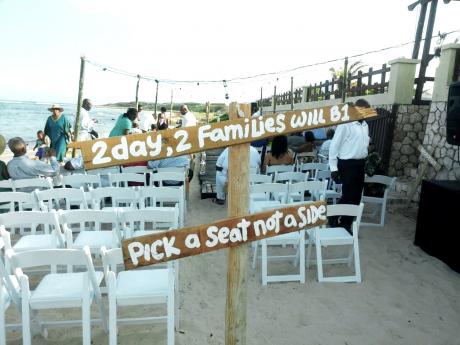 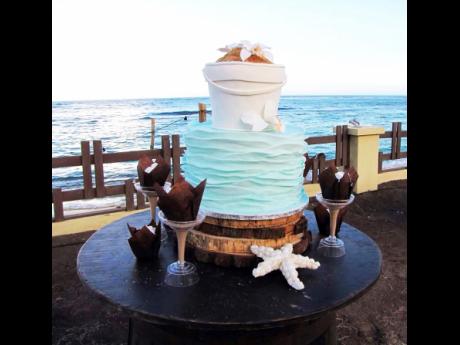 This beautiful beach-themed wedding cake was brought to life by Suelan's Sugabuzz Desserts, with the help of her mentor, Mrs Denise Cargill. 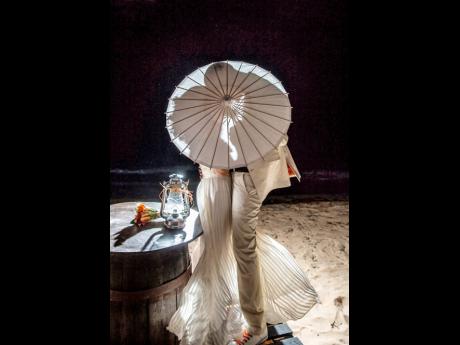 Suelan and Teino tries to steal a little kiss behind the umbrella. 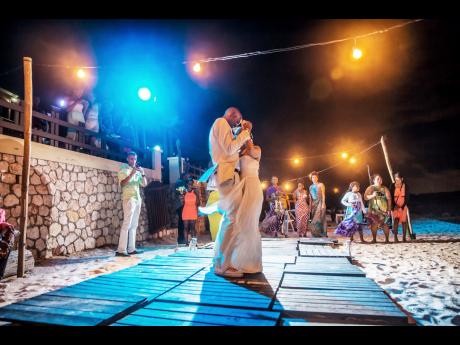 The couple sets the mood for the dancefloor. 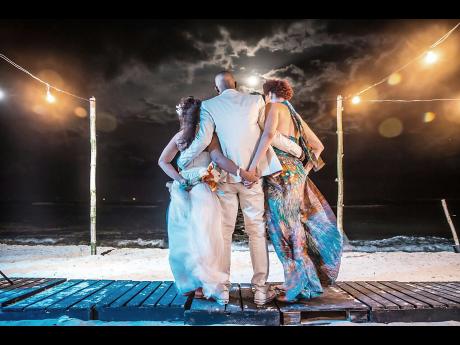 The bride (Suelan) and her maid of honour (Dr. Zaria Malcolm), decided to sandwich the groom (Teino) for this photo op. 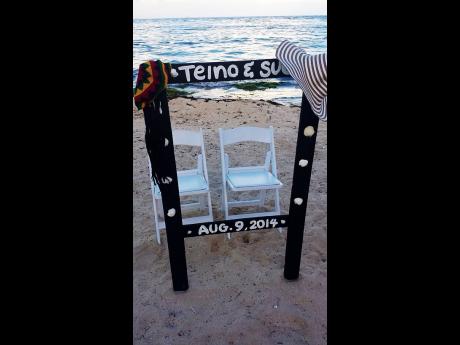 This photo booth completed with props, allowed guests to hol' a vibe on the beach. 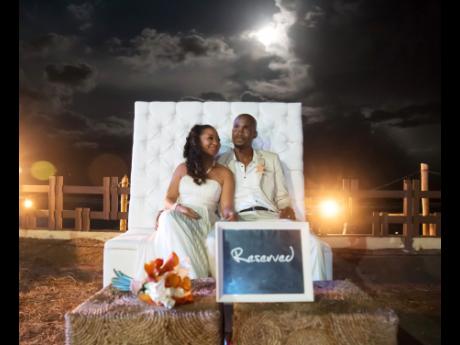 The clear blue sky and the tranquil and serene atmosphere, which oozed from the pristine Caribbean sea just metres away, created an impeccable setting for a canvas of breathtaking moments, etched forever in the minds of the newlyweds ? The Gleaner Company?s Entertainment Editor Teino Evans, and graphic designer at Marketing Counselors and SugaBuzz boss Suelan Chung.

With a theme reflecting the personalities of the couple ? relaxation mixed with sophistication was the order of the day at Sandhills Bay in Hellshire for a laid back yet inimitable experience as all present witnessed the love between the two and how effortlessly this was demonstrated.

With eyes fixed on his bride as she inched closer to him, as Saxophoist Verlando Small played one of their favourite songs John Legend?s All of Me Teino was obviously captivated by the alluring presence of the woman who would in a few minutes be joined to him in holy matrimony. Suelan?s strapless ivory flour length gown fluttered in the breeze as she maintained a reassuring eye contact with her husband to be.

Standing in front of officiating ministers, Rev Gordon Evans and Maitland Evans, both uncles of the groom, the couple absorbed the messages that were shared as guidelines for a successful and lasting union.

Seating on strategically placed chairs, family and friends soaked in the ceremony after obliging to the couple?s request to ?Pick a seat and not a side?. Without obvious lines of demarcation, everyone was joined as one, enjoying the fairytale episode unfolding.

After the ceremony, with shoes back on (for those opted to go barefooted on the beach) guests were privy to the tantalising sweet treats courtesy of SugaBuzz at a dessert station and an array of hors d?oeuvres that certainly pleased and tantalised palates throughout the evening. And to cool down ? homemade mint lemonade as well as the coconut jelly served on the beach from the ?jelly man? were the ideal quenchers for the evening.

Positioned closely by the enchanting and fascinating two tiered cake, which left quite an impression, especially since it was made by the bride and her mentor, Denise Cargill, the couple soaked in all the well wishes from family and friends.

The maid of honour Dr Zaria Malcolm, who has know the bride since they were children, gave a tear filled toast to her best friend, setting the pattern for what was to come from the groom in his reply. Speaking unscripted and from the heart, Teino spoke glowingly of his bride. He noted how complete he feels with Suelan as his wife, and that she was a blessing that came into his life when he least expected it years ago, and credits it to God?s perfect timing and design.

Evans was introduced to Suelan by his best friend at her birthday party in January 2012. ?My best friend Junior always use to tell me that he had the perfect girl for me,? Tieno recalls to Flair noted that he was actually her birthday present.

At the end of the night they exchanged numbers and kept in touch. He notes that within a month he knew that she was the one for him. He notes that his wife knows what she wants and they knew they were right for each other. ?She is very selfless person ? she is genuinely a kind person at heart. She is the first person who actually gave me a valentine?s Day present,? he notes adding, She thinks differently, she is just different.?

A year after they met he knew it was time to make it official. They felt like they had known each other for years. ?When I proposed it was long overdue,? he tells Flair of his proposal in January.

He noted he wanted to start 2014 as an engaged man, but he wanted to do it in the downtime of them leaving church and meeting up with their friends, but things didn?t work out as planned so he went for plan B. On January 1, as both families gathered, he surprised her with a proposal that had her in tears.

After downloading her favourite song, he consulted her father and told him of his intentions. He then gave her father who was in charge of the music the song to play. As it started playing he walked out towards his unsuspecting bride with the box in his hand. ? When she saw me walking towards her with the box she started to cry uncontrollably.? Through her tears she finally said yes, and six months later on August 9, they were dancing to the same song as husband and wife.