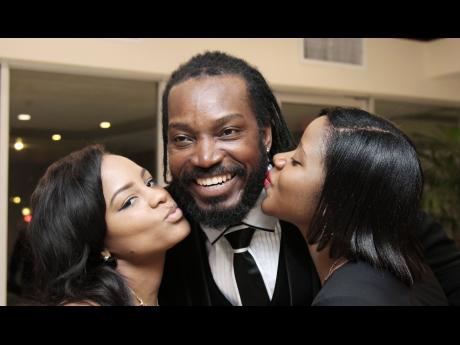 I like Chris Gayle. Hold on! Let me qualify, lest one think I am a media worker who is making advances towards him. What I mean is that he is a good athlete. Nonetheless, while I think he’s a good batsman, he is not a great, because every so often he loses his wicket because of a stupid stroke. Worse, he does the same thing repeatedly.

Now, I will admit that I’m not a lover of games with small balls, but Gayle seems to have sent consistent balls to the slips, slid through the cover,and, in the end, he was caught in the gully. A powerful batsman, he does not have a wide variety of strokes and certainly doesn’t seem to be good at any other sport. Indeed, his failure at gymnastics has him putting his own foot into his mouth.

Moreover, his defence, that it was a joke, merely indicates that he should leave the humour to the few Jamaican comedians who are actually funny, since the majority of them are at best pathetic anyway. Doubtless, many Jamaican comics are simply jokers, with their punch lines as predictable as the ill-fated strokes played by most West Indian batsmen when competing against the Australians. It was a stupid gaffe.

A large black man, interviewed by what some people think an attractive white female reporter, makes an unsolicited approach to her and invites her out. Under any circumstance, that is inappropriate. For all the defenders of the proposition, on the grounds of Jamaican culture and ‘gyalism’, I would like to put their wives or girlfriends in the position of journalist Mel McLaughlin.

Bet you that it wouldn’t seem so acceptable. Worse, in Australia, a country where homosexuality is legal and there is a strong push towards same-sex marriage, how would any heterosexual Jamaican man feel if he were being interviewed by Gayvon Buttler, who suddenly tells him that he thinks that he has beautiful eyes and that he gets as much pleasure seeing him walk away after the interview as he did while talking in his face. Most Jamaican men would feel like backing their guns, knives or use their fists if unarmed.

The fact is, sexual advances have no place in professional settings and most certainly not in the context of an interview on air. Wrong and inappropriate is simply wrong and inappropriate. However, I am not certain what the point is that local and international feminists are making when they scream, “Sexism!” In the aforementioned reference, if Leslie Ann, the athlete, were pursuing a known lesbian journalist, in the same forum, it would just be wrong. Find me the sexism there. Still, I cannot help but wonder if the moves made by Gayle were exacerbated by the fact that he is black and male. Octogenarian American journalist Barbara Walters, who has had more plastic surgery than a fibreglass boat, just three weeks ago made an otherwise deeply offensive comment. Interviewing, 40-year-old actor Bradley Cooper, she declared, “I could just sit and stare at you, but that would take too much time.” Continuing, she said, “I think you’re handsome, I think you’re sexy.” And apparently powered by the same geriatric aphrodisiac used by beleaguered comedian Dr William ‘Bill’ Cosby, EdD, she followed up with the over-the-top comment, “But I, I find you very screwable.”

Although almost a senior citizen myself, the only way I would not feel offended by the ‘screwable’ adjective would be if it was a reference to my manual dexterity and ability to use a tool to tighten the rivets, nuts and bolts that the surgeons have implanted to reverse the evidence of time on her body. Notwithstanding this reference, hardly anyone seemed to remember that in 2014, Russian tennis star Maria Sharapova, the highest-paid female athlete in the world, unashamedly tried to ‘look’male Australian journalist Lachlan Wills during the Australian Open tournament. She remarked that she totally forgot the question he had posed because she was in awe of his self-esteem and was busy “admiring his form”. The only things different about her crime and that of Gayle are the three Ps: personality, penis and pigment. Some people might think that the behaviour of Walters and Sharapova is excusable, because they are women and white. However, I can think of at least one woman who would ‘girth’ them if they had been so forward to her spouse.

Nevertheless, nothing in what I have said must be construed to say that Gayle, Sharapova or Walters do not have the right to sexually proposition anyone they wish, outside of a professional setting. Moreover, I hope no one leaks my private conversation with the ‘gluteously’ endowed ‘Afro-desiac’ nemesis of Sharapova. But Gayle must wait for the right occasion. Time and patience is not only a community outside Linstead. Nevertheless, an apology is an apology, and only the ‘victim’ of the improper behaviour can claim sexual harassment. There is enough mileage made from the incident, and McLaughlin herself has never publicly said that she felt uncomfortable or was harassed. Furthermore, before jumping into a wide-scale debate, we need to recognise that we have double standards, and there are behaviours in Jamaica that are not offensive here but are tabooed elsewhere. No one seems to understand that a female manager who routinely calls her staff ‘honey’ or ‘my dear’ is also crossing the line.

Yet, this is still Jamaica, where people refer to others as Fatta, Fatty, Mr Chin, Coolieman, Blacks, Blacka, Brown Man, Slimmaz, Browning, with no derogatory intent. For me, I am annoyed with Gayle, because, instead of writing about the executive action of American President Barack Obama, in curtailing some of the nonsense in gun control, I have to be taking on this issue. But there are lessons to be learnt, and let us help to teach them as we go forward. I promise to resist the temptation to tell one particular journalist that ... . Happy New Year!

- Dr Orville Taylor is senior lecturer in sociology at the UWI and a radio talk-show host. Email feedback to columns@gleanerjm.comand tayloronblackline @hotmail.com.