Comrades got it right: perfect formula for losing 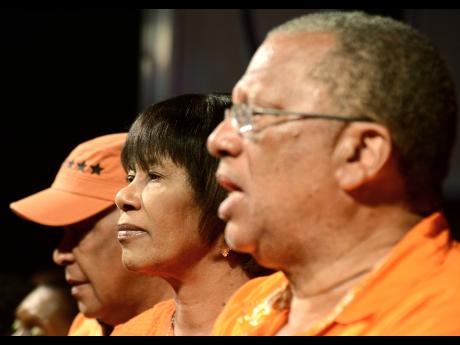 Well, since it has a leadership that does not like to face facts, it probably didn't even read the headlines in last Friday's paper. So, it might just believe that the loss on Ben Johnson Day did not take place. Moreover, there were instructions during the concession speech by the Comrade leader that she was going to deploy strong agents to pay close attention to the recounts. Of course, there are some knife-edge losses to the Jamaica Labour Party (JLP). Perhaps the polls that needed recounting were those from the academics or the private ones done by tailors of the emperor's new clothes. However, 30-33 is not subject to its spokesmen and spin doctors' machinations.

True, patterns suggested that a late February election would have favoured the incumbent People's National Party (PNP). But didn't it occur to the purveyors of history that the election was being called on the day after the birthday of the founder of the JLP, Alexander Bustamante, the first major political figure to have turned his back on the PNP and spun around to beat it?

So thin is that wiggle room that it could wriggle out the supporters for North East St Elizabeth former member of parliament, Raymond Pryce, and squeeze in Alando Terrelonge past another skinny man, Arnaldo Brown, who, using his own phone, might now only able to be texting in his disappointment.

With two spokesmen who had never won a seat themselves, the party was guided by theorists who have their own issues with reality. Surprisingly, despite the Anderson poll indicating that 70 per cent of Jamaicans believing that the mega construction of the 'next prime minister's' house was not an issue they wanted on the agenda, Peter Phillips, who showed how successful he could be in internal party elections, kept pushing it. Then, the ne'er-elected Delano Franklyn reopened the inquiry into the matter after the party had indicated that the door had been closed. In the streets, we call that a 'punk move'.

Maybe someone forgot that there are not enough PNPs to win an election in this country, and that victories and successes are guaranteed by wooing the undecided or uncommitted non-aligned. The majority of the potential voters indicated that they wanted to see a debate. Never mind the finding that the public wanted to see it for entertainment value. The fact is, no one would have remembered who won it, had it taken place, but a media-shy party leader's apparently copping out and dodging it with silly pretexts and faux requests for apologies will be inscribed in historic stone.

Importantly, the entire media fraternity, even those who are supporters of the PNP, was at a minimum, disappointed, and at worst, full of uric acid. Those in the academy who look at these debates considered the fugue of the prime minister to be an affront and she must have lost a few Xs. Let me, at this point, go back to history. A consistent finding I have pointed out in my columns and in my book, Broken Promises, Hearts and Pockets: A Century of Betrayal of the Jamaican Working Class, is that the incumbent who has confronted, threatened or otherwise dissed the media always goes on to lose the next election. Ask JLP leader Andrew Holness; he has learnt this time. Portia Simpson Miller has made the same mistake twice.

This PNP leadership and those who pull the strings in the background were working out a perfect formula to lose. Two factors weigh heavily in election outcomes in this country: marginalising workers and disrespecting the media. As far back as 32 years ago, Michael Moffit, in the book, The World's Money, observed that "the IMF has overthrown more governments than Marx and Lenin combined". Those who remember the pain the party and country suffered under the International Monetary Fund (IMF) must have known that the successes in passing 11 tests would involve the eucalyptus oil that Holness mentioned. Well, certainly, they are feeling the effects of the castor oil and senna pods now.

IMF policies are inherently anti-labour, and I have spent my entire graduate academic life looking on the topic. Whatever the IMF measures, a party that snatched the working class from the JLP in the late 1960s to early 1970s needed to simply pay attention to the research and literature regarding productivity, worker satisfaction, and decent work. With a trade union leader advising her, there were clear things that had to have been done.

They might have ignored the comments I made at the JCTU 20th anniversary event in which I gave the special lecture. However, the research and 19 pages of recommendations are hidden in full view in the book. Oops! That is the best place to hide it, because the union leaders who have her ears have not indicated reading it either.

Furthermore, this party leader, whose best political record was her work at the Ministry of Labour, felt that labour issues were so unimportant that they needed only a half-minister. That shows how important workers' issues were to her. Moreover, giving half a minister to a double-size man's ministry said what she thought about the work of the late Roger Clarke and the significance of agriculture.

And never mind the Chinese mega projects and those living here with 'work permits'. Not enough of them have votes.

Interestingly, the United Nations Development Programme (UNDP) has used an incorporative measure of development since 1980. Combining economic growth, education, life expectancy and employment rates, it created the human development index (HDI). A consistent and published simple fact is that if workers are given the right protection by their government, the HDI rises and productivity and economic growth will also increase. Well, did you know that the HDI declined from 0.727 in 2011 to 0.723 in 2012, to a decade-low 0.717 in 2013, and then had a meagre improvement to 0.719 in 2014? Jamaicans were worse off in 2014 than in 2011. That was not balancing their lives.

Yet, a forgiving populace would have perhaps pardoned a less arrogant PNP. Forcing out Damion Crawford from St Andrew, they gave a marginal seat to the JLP. Pushing out Lloyd B. Smith from his hard-fought St James seat gave the JLP a fillip. Ask the losing candidates, Wynter McIntosh, Phyllis Mitchell, Keith Walford, Andre Hylton, the aforementioned Arnaldo, who each lost by fewer than 500 votes, and Winston Green, who lost by a nose, and tell them that the four per cent didn't matter.

- Dr Orville Taylor is senior lecturer in sociology at the UWI and a radio talk-show host. His book 'Broken Promises, Hearts and Pockets, is on bookshelves. Email feedback to columns@gleanerjm.com and tayloronblackline@hotmail.com.