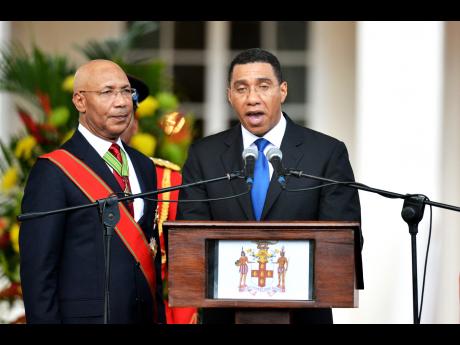 And the general election ... . Those are the last words I am going to say about it. So do all the postmortem you wish. However, Andrew Michael Holness has been sworn in as prime minister, and it is now a matter of governance. He might find the accommodation at Vale Royal a bit too tight and modest for his liking, but at least he won't be asking the finance minister to buy him and the rest of the Cabinet new cars.

And as we look towards other swearings-in, a set of oranges are still in shock that some types of sweet oranges in Jamaica are actually green when ripe. Thus, the swearings of a different type are taking place. I must, however, give thanks that despite God being a servant and instrument of some political leaders, he did not open up the ground and swallow them up, as they were praying for him to do, so that they could avoid seeing Andrew getting installed. Indeed, in God's house, there are many mansions, but it looks like the Almighty must have quietly sneaked in and occupied a room in the mega mansion.

Lot's Wife, who is not even worthy of a name in the Bible, perished for looking back. However, apart from the salt she turned into, which people are now sucking from wooden spoons, there is no need for it in open wounds. There is a country to be governed and Andrew must hit the ground running. Importantly, he must make sure he is wearing the right type of sneakers, because sandals and push-toe slippers are not suitable for any race, however fashionable they might be.

True, Jesus wore them, but we must realise that many words in the Bible are attributed to him when they are actually from the big, strapping fisherman Peter and the turn-back oppressor Paul, both of whom were pig-headed bullies before getting the touch.

Jesus' second commandment of loving one's neighbour as oneself must be the mantra for the good governance that this prime minister must follow. He must, first of all, approach his challenge by facing facts and not sanitised versions provided by a cadre of yes-men who follow him around kissing his coat-tails or other parts of his tailored suits. The first bitter medicine must be first taken by him. That is, he must not only do the policy and administrative fact-finding but must also be prepared to take harsh criticism, some of which will vilify him and peel the skin off his ego from time to time.

Inasmuch as he might be unfairly reputed as disliking bright people near to him, he will invariably have to surround himself with a set of individuals who are first and foremost loyal to the nation and truth, even if it crosses party lines and loyalties. Many of them will be more knowledgeable and have higher IQs than he does. That is not unusual for a prime minister, because there are at least three who he is clearly smarter than. By the way, it might be a myth dispensed during Labourite infighting, because from what I remember about Juliet Landell as a student, she is one of the most intelligent persons I have ever taught, and she is the closest of all Labourites to him.

Still, it is hoped that the apparent tyranny of the presigned letters was all a misunderstanding and not a harbinger of the desire to force consensus and suppress dissent. Andrew must tread carefully and not allow his selection of his ministers and public officials to be seen as a witch-hunt, especially since he does need the best set of people available, and the pool of loyal, back-rubbing Labourites and apologists is simply too shallow. After all, I am sure that he learned from the former prime minister regarding his approach to the last two elections. He should take pages from a better book - one which is yet unread by failed leaders before him.

We know that the agreement with the International Monetary Fund (IMF) is a priority, and there is less wiggle room than there is space in the former finance minister's waistline. I am not a tax, mathematics or economics expert. But it is hoped that the financial analyst John Jackson is right and his counterpart, orange-jacketed Ralston Hyman, is wrong and that Andrew's pre-election campaign proposal will not derail the G-string budget forced by the Fund.

On the surface, the additional $18,000 that was sold to the working class sounds good. This proposal seems to suggest that those earning less than $1.5 million annually will not pay any income tax, and those with salaries between $1.5 million and $5 million continue to pay the current 25 per cent, but with a tax-free threshold of $592,800.

However, this is a country where the highly marketable, patriotic top public servants with international qualifications and scare skills have experienced a virtual wage freeze for the better part of a decade. Add to that group the hard-to-replace senior medical doctors, judges, prosecutors, university senior academics and professors, senior police and army personnel.

Simply put, the brightest and most qualified people will now pay more income tax and take home less, if Andrew's tax plan goes as I have understood it. How then do you run a country when you discourage the persons who have spent most time and money on their education and who possess the hardest-to-replace skills?

As for his Cabinet, there is only one parliamentarian who I think should remain a backbencher. Despite his recent description of a soldier as part of the human anatomy, I doubt that this suggests expertise or suitability for the health or agriculture ministry. Some of the old shadow ministers, I suspect, will return to their old roles. My caution is, however, that the standard should be competence and dedication, not simply loyalty. There is work to be done and we need the best hands on deck.

- Dr Orville Taylor is senior lecturer in sociology at the UWI and a radio talk-show host. His book 'Broken Promises, Hearts and Pockets, is on bookshelves. Email feedback to columns@gleanerjm.com and tayloronblackline@hotmail.com.