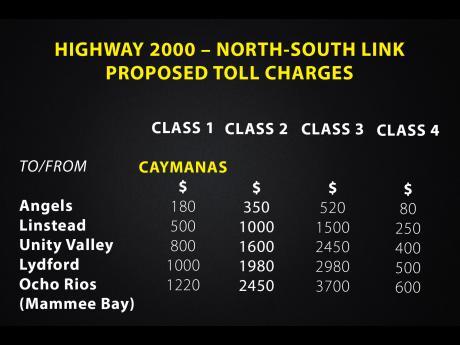 If anyone had told me that it would have been so expensive to cut out the Bog Walk gorge or all the other scenic features across our St Catherine-St Ann borders, I would have not believed it.

From Caymanas to Ocho Rios, it is proposed that drivers in cars like the regular Civic and Sunny will have to fork out more than $2,400 for the two-way trip. In terms of sheer mileage, it seems rather exorbitant.

True, I have not yet driven on the leg from the Mandela, and yes, I do appreciate the division of the highway into two, greatly reducing the bottleneck near White Marl. But the distance from that section to 'Ochi' is around 80 kilometres. To go to Mandeville from an equivalent point just down the road, using the other toll road built by the French, is around 86 kilometres. Yet, it costs $900 for the round trip. Sorry for the poor attention I paid in mathematics class, but that looks like almost triple for the same distance. Still, it is now a luxury, just like when one employs a household worker.

Now we know that the previous administration had been patting itself on its back - and a little below - over the deal with China Harbour Engineering Company (CHEC). But the relationship between the Government and the Chinese actually started under the 2007-2011 Jamaica Labour Party (JLP) regime. However, I suspect that the final details of this toll, which feels like a Shaolin training method, was crafted under the hands of the People's National Party (PNP). One, therefore, cannot help but wonder if the election had been timed later, especially after this announcement, how many more seats would have been lost. Indeed, the high-cost highway would probably have been used by the motorised voters to drive themselves away from the tolls to the polls.

However, there are other aspects of this toll business that are worrying me, and I am awaiting word from returned Minister of Transport Mike Henry as to what else we are to expect. My suspicions and fears are pointing to more hidden charges and economic burdens on the Jamaican people. One might not recall, but when the Portmore and Spanish Town legs of Highway 2000 were opened, and the people from the Twin City were being forced to pay a toll to go home or be crammed on to the Mandela, I sounded an alarm.

In my August 6, 2006 column in this very newspaper, I observed that the Government had tied itself into a Shylock-type contract with the Bouygues Merchant of Paris. The pound of flesh is that we were contractually bound to guarantee that the French contractors make a profit, and we don't mean Reverend Miller or Phinn. Speaking of prophecy, the Mandela Highway, under the agreement, should be kept in good working order. However, it must not be an alternative route to the extent that it diverts traffic from the Spain leg.

Call me an Elijah wannabe if you wish, but a decade ago, I did tell the public that the agreement, written in French letters, had a clause that seemed to be sneaking something through the back door. My comments then were, "In summary, it stipulates that government is bound to increase the toll or compensation to the developer if there is any reduction in traffic levels on the toll road due to 'the carrying out of works by or on behalf of the Government of Jamaica which: (a) provides a new rail public transport passenger link between Spanish Town and Kingston; or (b) enhances the speed or capacity of competing roads within the transport corridor served by the toll road.'

"Simply put, if the Government improves Mandela as promised, or develops the railway, it must compensate the owners of Highway 2000 or increase the toll."

My area of specialisation is not engineering, and I certainly am not a Roads Scholar. However, I believe that the modification to the Mandela that eases the flow leading to the Spanish Town Bypass already has provided a substitute to the Bouygues toll road. Furthermore, at $180 to sail from Caymanas to Angels, it clearly is a viable option to the $130 from Mandela to Cromarty. Therefore, someone will have to convert some of the Jamaican dollars to renminbi and send off some euros. But bet you that they all knew that already.

As for the railroad service, there might be a good reason why the engine car of a train is called a locomotive. Even before the return of the JLP to power, Henry was pushing the train again on the tracks. In January this year, he bemoaned the lack of action on the part of Government in regard to a multimodal plan for the resuscitation of the industry. It is an attractive image of trains moving across the country with scenic stops. Indeed, since taking office two weeks ago, Henry lamented the difficulty in accessing a juicy $340 million sitting in the Development Bank of Jamaica he could use for the project.

Nevertheless, the above-mentioned clause (a) ominously warns that reactivating the railroad or putting in new service will trip in the euro flow to France again. Moreover, Section 7 (1) (c) of The Jamaica Railway Corporation Act makes it clear that the railway must be run as a profitable entity, and not a charity or burden on the people, and "to conduct the affairs of the Corporation as to ensure that, so far as practicable, the annual revenues of the Corporation are, taking one financial year with another, sufficient to meet all charges properly chargeable to revenue ...". Inasmuch as outgoing Chairman Joseph Matalon seems to have thought that the Jamaica Railway Corporation can be profitable, I still need to be convinced that it is not a pipe dream.

When the French deal was struck, there was a lot that 'oui' were not aware of. This time I don't want to be asking, 'hao!'