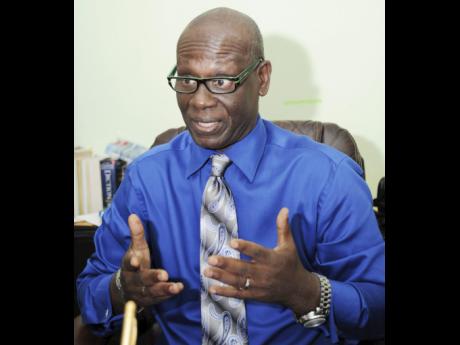 Norman Grindley
Damned if you do, damned if you don't: Desmond McKenzie is under fire on two fronts - those who perceive he might have had a hand in his son's recruitment at the NSWMA, and those who believe he is guilty of overreach by instructing that his son not be hired.

If ignorance is bliss, there are three of our politicians who must be the happiest persons in the world. Combined, their initials are, like the popular antihistamine, DPH. Call it garbage or trash talk, but the affairs regarding the National Solid Waste Management Authority (NSWMA) are too difficult to rubbish.

So here we have the 'D'. Desmond McKenzie, to his credit, has ordered an audit of the Authority amid major discrepancies in management and governance. And not hunting witches or any ghoulish creatures from the rhymes, he has sensibly retained the services of immediate past chairman, financial analyst Dennis Chung - a man who is likely to call a spade a spade and a backhoe for what it is won't be a bulldozer sleeping on the job.

However, like David, who was powerless while his sons dug for fleshly gold in his household, McKenzie's reputation and credibility have been assaulted right under his nose, by his own progeny. I am still incredulous that his son could have applied for a job at the NSWMA without informing him. Understanding that in this post-election season there is always the vigilance over the pastor who gives baptismal rights to his own offspring first, a serious injustice was done to Daddy Mac. Imagine what this fellow would do to his father if he were old and feeble.

Still, the elder McKenzie has issued a disclaimer, claiming that he was totally flat-footed by the junior, and, with a perfect defence in law, pleaded ignorance. Whether or not Big Mac is being truthful is not for me to determine. However, his response is a bit scary. Inasmuch as it seems honourable that he would give instructions that little Mac be not hired, isn't this precisely what we do not want? Whether interference in the positive way or not, do we not want to know that the political directorate can micromanage any publicly owned enterprise.

And although I don't personally know the Devil, let me play his advocate. Does anyone know if Junior Mac is qualified for the job? And if he is, suppose he is indeed the best candidate. Isn't it then unfair to eliminate him because of some bodily fluid exchanged between his parents nine months before he was born? Would you disqualify someone from being a senior superintendent of police, simply because his father is commissioner? If genes should not qualify you for a job, should they prevent you from getting it?

And here comes the P. Sister Portia Lucretia Simpson Miller was elected to the leadership of the People's National Party (PNP). She had two responsibilities. First - to her party, she was tasked to win two elections. Second - to the poor working class of this country, her mandate was to develop policies to uplift them by providing decent work and economic opportunities.

This group of patriotic working Jamaicans did not want handouts. Rather, a simple continuation of the 'democratic socialist' hope that presidential candidate Bernie Sanders is now spinning to the American electorate. Apparently stunned that anyone dare challenge her, Simpson Miller seems oblivious to the fact that she is not the PNP. Nor is the party the inner circle of yes-men and yes-women who kept telling her that the grass is orange and the debate was not critical for her first task.

Totally blind to the fact that one can't govern in Opposition, apparently Sister P thought that if Andrew Holness was such a master debater, he didn't need anyone beside him and he should take control of it and handle it himself.

True, the loss is a hard pill to swallow, but she simply blew it twice and failed her party and people. Therefore, should the party realistically wait for 75-year-old Grandmama P to finally wake up and build her legacy? I've heard of 'ears hard', but never a person with blinded ears.

Now to the H. This is Jamaica, and we place 'Hs' where they don't 'hexist' and 'heliminate' them where the 'hought' not to be 'idden. Haudley Shaw must have been asleep in Parliament when the Budget was being read by the former government. Worse, he has ample opportunity to get the information, before coming up with the '10-Point Plan', and thus should have known that the miracle money for the $1.5-million tax plan was hidden and neatly tucked into the Consolidated Fund like the fat man's shirt. It is a major faux pas.

A finance minister must quickly demonstrate credibility in order to gain the confidence of not only our local electors and entrepreneurs, but the international partners and multilaterals. His/her speech must be spot on, and if he or she is cocky, it cannot be only mouth; the 'backative' must be strong. Most important, we must be able to trust him or her.

This new Jamaica Labour Party (JLP) administration must make no more missteps in the next few days, especially since it is licking its chops at the $7-trillion international financial-services sector. While not suggesting that Shaw is being wilfully deceptive, there are some things that a minister of finance cannot be ignorant of.

We live in a world where the USA, not willing to put itself under any international monitoring or scrutiny, is the centre of the world capitalist system. Therefore, as long as American currency is used and US financial institutions are involved, however remotely, any financial impropriety, even if hidden by vigilant Jamaican lawyers under lawyer-client privilege, is subject to American punitive action.

We have had a bad history with poor regulation of the financial sector and we can ill-afford underinformed ministers. Going forward, my suggestion is that we dot every 'T' and cross every 'I' before venturing. This is no sweet sugar deal, and Hill-advised investments can become disastrous. The JLP won the debate; though surprised, it has every chance of making smart fiscal and financial step.

And they can ask young Chung, he's much more affordable than most others. And by the way, I bet the expert adviser is the fourth happy person.