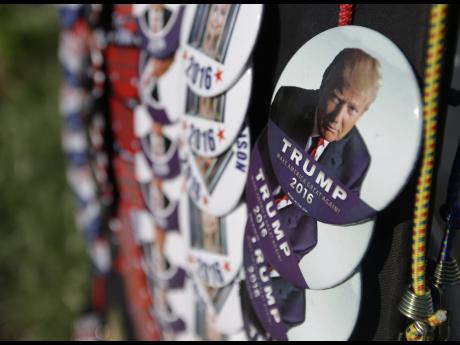 Maybe I am the only Jamaican to whom the name Donald Trump seems like a laxative, but I am as nervous as a flight attendant with a suitcase full of coke.

Look, no one predicted that our own Donald Chump would have been given ministerial portfolio until we saw the warming ton of smiles as he waxed about the damage, caused by the torrential rains. Yes, we didn't have to go to hell, although the middle finger pointed in that direction and it did not freeze over, but someone who we thought would have suffered from an electile dysfunction is now a minister of government. Inasmuch as his margin diminished to just over 2,700, down from the 3,200 in 2007, his raw number of votes actually increased from 10,488 in 2007 to 11,370.

Numbers don't lie, although politicians repeatedly do, but like his Jamaican counterpart, Hair Force One has numerals that are very impressive if not scary.

Trump has more than 10 million popular votes after his primary victories last week. Let's put that into perspective. When Mitt Romney had secured the nomination of the Republican Party in 2012, he had 250,000 fewer votes. Back in 2008, when John McCain had gained the nomination, he did so with 153,000 below the Trump

figure. Indeed, George W. Bush ended his 2000 campaign with 10.8 million the party's high-water mark. At this rate, the man whose hairstylist could be the one who designed the Beijing Olympics Bird's Nest looks set to be the most popular Republican nominee ever.

Pundits have calculated that he will just fall short of the 1,237-delegate target. Nonetheless, he has 987, and there are still 583 up for grabs. Count all you want, but don't count him out.

Yet, the concern is not whether or not he can beat Hillary Clinton, the Democratic front-runner. Rather, the question is, how the hell has he, the embarrassment of American politics, and the clown prince of the primaries, become the runaway leader in the race?

Trump has been disrespectful to women, believes that a wall should be erected to keep out Mexicans, and is apparently anti-immigration. Actually, he is anti-non-white immigration, because his two wives are from Eastern Europe, where the gene pool is less contaminated by African blood. He is bent on pulling the USA from NATO; is willing to break international law and commit war crimes, including torture; ban Muslims from entering America; and called Barack Obama "... the worst president in US history". Yet, he calls his Republican rival/colleague 'Lyin'' Ted Cruz.

Trump is like one's senile grandfather whose tongue loosens up and says everything conceivable. Still, we find him funny, because we think the things that he says but would not dare express our feelings. Therefore, we keep a straight face when he asks the neighbour if she has no television at home and why she dares leave the house in her nightie, despite it being a new designer blouse. Donald Trump might very well be the mouthpiece of an America that is nowhere near as egalitarian and democratic as it believes.

The truth is, there is absolutely no way that he could be so popular if the majority of voters so far did not share, or at least were uncomfortable with, his diatribe. So, here we have a billionaire American bigot who has lived the American dream but is a nightmare for us all.

He is terrifying for the Republican Party, which is now scurrying to find all kinds of loopholes to 'colt the game' and prevent the will of the majority of Republicans from being carried forward. This is deeply worrying because, in the world's greatest democracy, deceptive but legal means are being employed to subvert the election of the individual who most Republicans want to be America's choice.

Having repugnant heads of government who represent the will of the people is not uncommon in modern society. Hugo Ch·vez, as irritating as he was to the USA, was democratically elected, and deposed Haitian president Jean-Bertrand Aristide was as well. Despite my wearing my knees to the bones, praying that he never gets the nomination, or, if he does, that he loses to Clinton, I am a stickler for not just the rule of law, but for faithful adherence to what the will of the people dictates when governments are to be chosen.

What are the lessons America is teaching us when the Republicans, formed in 1854 on an anti-slavery platform, are behaving like Third World dictatorships? In fact, the US has a less-than-ideal record in preserving the democratic choices of its people. Four duly elected presidents have been assassinated, and at least 20 discovered attempts have been made on their lives, with Obama, the main victim, with five such efforts.

America's embarrassment lies in the fact that after 240 years of electing presidents, the motto, 'Out of Many, One', holds true today. Only one type of American typically gets elected. True, there have been two bachelor presidents, with one remaining unwed all his life. But for all its egalitarian ideology and liberal universal human rights, there have been more security breaches during Obama's term; no woman has been elected president; and the typical nominee since 1893 has been a family man. And unless one can, in hindsight, declare James Buchanan, elected in 1857, to be gay as speculated, the American electorate is definitely not homophilic.

The USA's excursion with true democracy is much shorter than ours. Because of the 1937 case, Breedlove v Suttles, states could legally impose a prohibitive 'poll tax' effectively preventing most African Americans from voting. Indeed, despite the 1944 ruling by the Supreme Court in Smith v Allwright that the 'white primary' law was unconstitutional, the poll tax in state elections remained in force until the 24th Amendment in 1964.

Even so, only the 1966 Harper v Virginia Board of Elections unambiguously finally gave universal adult suffrage to Americans, 22 years after we had successively elected tribes of Labourites and Comrades.

By the way, including the deceased, it is believed that we may have had a gay head of government, and certainly we have had a woman twice. Let's hope America finds the ace in the hole, uses the queen, and flushes the trump card.

• Dr Orville Taylor is senior lecturer in sociology at the UWI and a radio talk-show host. His book, 'Broken Promises, Hearts and Pockets' is on bookshelves. Email feedback to columns