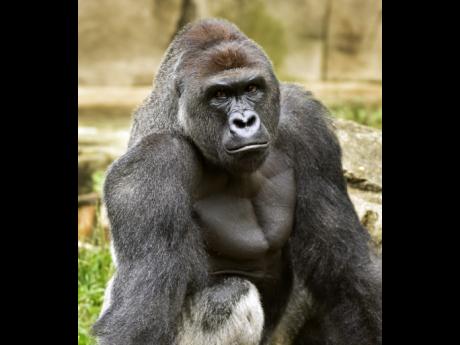 AP
A June 20, 2015 photo provided by the Cincinnati Zoo and Botanical Garden shows Harambe, the western lowland gorilla who was fatally shot on May 28, 2016 to protect a four-year-old boy who had entered this exhibit. 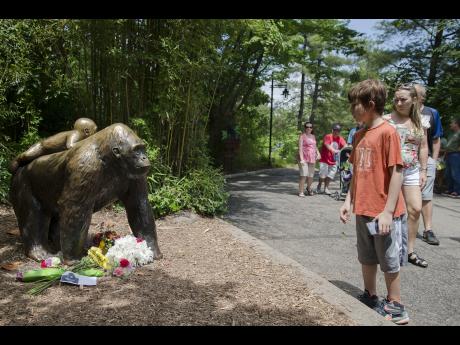 AP
Visitors pass a statue where flowers have been placed outside the Gorilla World exhibit at the Cincinnati Zoo & Botanical Garden on Sunday, May 29.
1
2

Never mind the witticism of Emanuella, the Nigerian Denise the Menace; gorillas are part of our family, and not just mine, but the protection of children is non-negotiable.

Self-deny all you want: Apart from the striking resemblance to some of your relatives and the apish behaviour of Donald Trump and a few of our own politicians, we also have 98 per cent of the genetic material of gorillas. Their blood is indistinguishable from ours under a microscope, and the last one I recalled being born in a zoo this year was delivered by an obstetrician via C-section.

Yet, the two per cent difference in DNA gives us a creature which is more than twice the weight of Arnold Schwarzenegger and eight times stronger. This creature can break jelly coconuts with one hand, dry coconuts with two fingers, and imagine what it can do with your bamboo joint. Gorillas do not speak, but they have been trained to understand human sign language. Yet they have their own sophisticated code of sounds, body and, importantly, facial gestures. However, even among the most eloquent persons, language is never a guarantee against misunderstanding. After all, our Jamaica Labour Party (JLP) Government and People's National Party (PNP) Opposition never seem to be communicating the same thing, even when it is the same issue.

Indeed, within the PNP, the matter relating to the €466,000 donation from Dutch company Trafigura Beheer is like the drunken uncle and his friends, Mr Wray and his nephew, who refuse to leave even after the party is done. And whether one examines the matter from 'All Angles' or only '180 Degrees North', the financing of the house of Prime Minister Andrew Holness and the transparency of his financial/tax dealings still raise questions. Anyway, those are the 800-pound gorillas that eventually have to be confronted.

A real gorilla is easier to understand. Like a human, it will charge. And it will charge when it wants to make a strong impression on those who threaten it. However, unlike some politicians, Harambe and other 'Bolgani' can back up their gesture with hard currency and they never shirk from responsibility to their bands.

The story of the child who fell into the enclosure in Cincinnati Zoo last week has unmasked the extent to which ignorance is our favourite companion. True, gorillas protect their young and are smart enough to recognise humans as a species of ape. Thus, they are actually more honest than the blind creationists.

Indeed, there have been numerous stories, apart from Tarzan, where captive-bred gorillas have protected human infants who have fallen or crept inside their pens. Interestingly, in 2016, this the Chinese Year of the Monkey, there is a completed pattern of three sixes, which marks the beast. Thirty years ago, 1986 in Jersey Zoo in the UK, five-year-old Levan Merritt fell into the gorilla pit and was quickly protected by the silverback male against other members of his band. In 1996, an unnamed male child did the same in Chicago's Brookfield Zoo and was cradled by a female gorilla named Bin Jua, who took him to the service door, where he could be safely retrieved by zookeepers.

Corroborated by a publication co-authored by Matthew McLennan of Oxford Brookes University, wild gorillas, which rarely come into contact with humans, have hardly ever attacked us, and it has been with provocation and after ignored warnings. Fatalities are even more unlikely. I am still trying to find any incident where a captive gorilla has killed a human. Nonetheless, being in the space of a silverback male is like being in the company of a demented man with a double-edged sharpened cutlass, like a 'panya' machete used by dishonest politicians.

Still, since we don't speak 'gorrilese' and they don't generally understand human language, which can confound persons even within their own political parties, a miscommunication can go horribly wrong. Gorilla infants are much hardier and stronger than their human counterparts, but apes don't know this. Therefore, a mild cuff or a playful drag through water could easily end the life of young Tarzan. Worse, there is a universal signal of peace and amity among humans, which means, 'Challenge me; I dare you' among great apes.

Never stare into the eyes of an ape or monkey unless you want a fight, and flashing a smile showing both sets of teeth in an open mouth could mean, 'Let's fight!' Imagine the little child looking loving into the eyes of the silverback and smiling.

As we second-guess the decision of the zookeepers to kill the creature who looks like a cousin twice removed, ask yourself: What would I do if a demented deaf-mute, who is many times stronger than me, has my child and I can't predict what he might do? Notably, both the gorilla and child are black. African-American males have been killed by law enforcement in the USA far more often than a rare gorilla. And, yes, oftentimes they are totally unarmed. American use-of-force protocols allow for the killing of black men and their ape relatives whenever there is a perceived threat.

Furthermore, inasmuch as I am sorry that the parents of the child are black, and that I believe that the enclosure was too easily breached, I place 100 per cent blame on the laps of the mother or caregiver who lost sight of him even for a millisecond. Having a child disappear long enough to climb over barriers and fall into the pit is like a firearm holder leaving his weapon in easy access and then cursing his luck when charged for negligence.

Sorry, if it were the zoos in Jamaica, I would be raising questions regarding safety and security, but I would expect that the neglectful parent or guardian be charged under our Child Care and Protection Act.

Nonetheless, in Jamaica, we are much too 'faas' for such an incident to occur. Other people would have been watching the child, even if to criticise what he was wearing.