Orville Taylor | America must face hate in the mirror 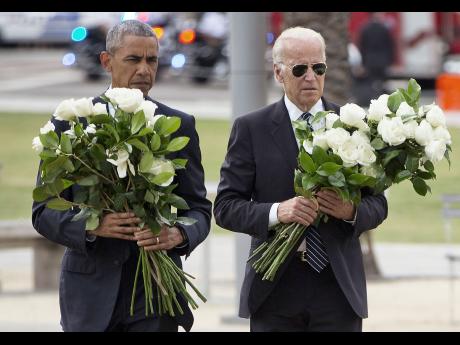 AP
US President Barack Obama and Vice-President Joe Biden carry bouquets comprising a total of 49 white roses, one in honour of each of the deceased victims, as they visit a memorial to the victims of the Pulse nightclub shooting last Thursday.

My friend, the best crime reporter in Jamaica, is being buried today, and we mourn other senseless deaths. On the 53rd anniversary of the murder of civil-rights activist Medgar Evers, by white supremacists, a madman, whatever his pretext or justification, murdered 49 persons, wounded 53 others, and terrorised an entire nightclub. Moreover, he has scared people across the United States (US) and in this country and sparked a knee-jerking mass debate. Oh, by the way, the massacre took place in a reputedly gay club named Pulse, not connected to our homophonic modelling agency, and the shooter, with a legally acquired assault rifle, was of Middle Eastern origin.

No, Omar Siddiqui Mateen is not Jamaican, although his first name is common in this country. The only obvious connection is that Jamaicans, unsurprisingly, were likely among the victims, as we were in the 9/11 attacks, and that the American Embassy here in Kingston flew Old Glory at half-mast with the rainbow flag below it. Suffering from overexposure to green kryptonite, our chief political legal adviser, Attorney General Marlene Malahoo Forte, sent a private tweet regarding her personal opinion about a matter of public law and diplomacy. The rainbow flag was, in her view, an insult to our laws.

And it might be. However, she must have forgotten that it was just over seven years ago when her party blurred the lines between political party and government and compromised the very office she now holds. Furthermore, events precipitated by the resistance of the "Not in my Cabinet!" Jamaica Labour Party (JLP) government led to the killing, in 2010, of 24 more persons than the Orlando massacre (though the commission of enquiry report suggests it was 69). For a person who presided over judicial trials, she should have shown better judgement. Moreover, the US Embassy is American property, and a sovereign nation can do as it pleases. This is the same government we tell from time to time to butt out and allow the public to vote with their consciences regarding the vexed issue.

Now, I will admit that I am personally opposed to the appropriation of a universal symbol by any group. Worse, it is the stealing of the ideas and message of an African-American cartoonist, Morrie Turner, who applied the term Rainbow Club to a group of American children, from as wide a range of demographics as one could have conceived in 1968, when his syndicated cartoon, Wee Pals, debuted. Diversity means precisely that - out of many one. It doesn't mean that it is applicable to only one group. I am less so, but still annoyed by the hijacking of a neutral term, which means happy and pleasant, to mean homosexual, because it disingenuously turns tolerance into approval.

Still, despite the subtle indignation and unfounded rumours about the embassy official taking recriminating measures, it is about time that American politicians and media, as well as our own opinion shapers, focus on where the real problems lie and acknowledge that we are just the symbolic weak fence that they are leaning on.

The truth is, hardly anyone in the who's who categories cared about the rainbow flag being here. And that is so because they all know that we are nowhere as homophobic as they keep pushing the narrative that we are. I haven't completed the audit, but I strongly suspect that there are many other countries where the US has an embassy or consulate where it did not put up the flag. On this point, I am willing to accept corrective evidence.

Focusing on an exaggerated image of Jamaican homophobia has prevented the Americans from looking at the threats in their own society. It is like going into Iraq in search of weapons of mass distraction, when the War on Terror had to be fought differently from how the Vietnam War was unwon. Inconvenient fact: Violence against LGBT people in the US has been increasing, despite the overall homicide rates steadily declining since the advent of the Obama presidency. Indeed, during the period 2000 to 2015, around 2.5 of every 1,000 homicides in the USA were of LGBT victims. This compares to around 0.9 per 1,000 in rabidly homophobic Jamaica.

America needs to face its history and ugly facts about itself and recognise that despite the wonderful image of the 'Out of Many, One' nation with universal respect of human and civil rights, it has had a deep history of hate being entrenched in its DNA. First Nations (Native Americans) will give a different story about how they had their lands expropriated, and African-Americans, even today, know that the vestiges of lynching haven't disappeared. A society characterised by segregation when President Obama was a child, and which assassinated civil-rights leader Martin Luther King when he was seven, still has lots of hate. Indeed, sodomy has only been outlawed since 2003.

Still, Orlando is not the largest hate-based massacre of Americans in history. It is unknown how many African-Americans were killed daily during slavery or Native Americans in the Indian wars. After all, it took 700,000 lives in a civil war which ended fewer than 100 years before Obama's birth for black people to be nominally free. No one knows how many the Ku Klux Klan might have killed in one sortie after the 1860s. Who knows of the hundreds killed in the 1917 East St Louis riots in Illinois? Read about the 1919 killing of 237 black sharecroppers in Arkansas and the more than 3,000 killed in Black Wall Street in Tulsa, Oklahoma, in 1921.

My concern is not so much with the radical Islamism that guided Mateen. Rather, it is the fact that there is still a pervasive message among elements of American society that it is all right to hate some people who are different from the norm or who simply fundamentally disagree with you. Whether it is a demented Timothy McVeigh, who bombed Oklahoma, or a Dylan Roofe who senselessly attacked the church in Charleston, or cops who proportionally kill more black civilians per cop killed than in Jamaica, America must teach itself to stop hating. Building a fence and anti-non-white conservative diatribe will only marginalise Americans living in America. It must be scary that the Trump vitriol appeals to so many. Perhaps there is a symbolism to the white skin peering through his orange veneer.

Yet, there will be haters and wackos, and America needs to keep guns out of their hands. Why the hell would any sensible, patriotic American want M16s to be easily obtainable under a perverse interpretation of the Second Amendment to the Constitution? It's that simple. Terrorism is murder, whatever the ploy, and all murders have three components: motive, means and opportunity. America has an ideological war that it is losing to extremists, both in America and in the Islamic world.

If it cannot win its new civil war, how will it help to protect the rest of us?