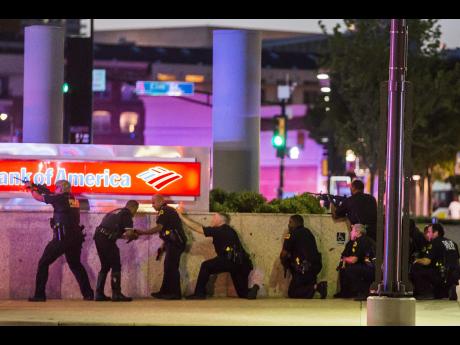 AP
In this July 7, 2016 photo, police respond after shots were fired at a Black Lives Matter rally in downtown Dallas. A gunman opened fire on police officers there, killing five and wounding seven.

Someone just woke up one morning, decided to get a gun and shoot at police officers. Call him a madman or a misguided youth, but when you are a police officer staring down the barrel of a gun in the hands of a murderer, you don't have time to ponder the socio-psychological. There is something amiss with regard to how black people and law enforcement relate to each other, and this is true for the USA and Jamaica.

In the USA, a lone gunman, a former member of the military, shot 12 police officers, killing five. A week later, in Louisiana, another three police officers were murdered in cold blood. Just days later, apparently in response to what the citizens in Tivoli Gardens, Kingston, Jamaica, call a merciless execution by the police of a young man, there was a minor riot.

What happened after was scary. Amid the cries of police brutality, bullet holes appeared in the windows of the police station, and unless the cops use magic like Criss Angel or Dynamo, the shots were fired by assailants who were outside the building or in vehicles. Moreover, men, including one who weighed slightly more than the M16 rifle he was carrying, were running through the streets. Write any version of this that you want, but citizens were firing on police in both societies.

War between gunmen and police does not occur in a vacuum. There are clear antecedents for it to occur. First, gunmen cannot effectively threaten police without guns to back up their menace. Loose gun laws in the USA have consistently led to high-powered weapons finding themselves in the hands of persons who are unsuitable to have them.

The right of citizens to bear arms under the Second Amendment of the constitution is not an unrestricted right. Jurisprudence in any civilised society dictates that the public and national interests always trump personal rights. Even so, given that gun-control laws vary from state to state, there ought to be some federal parameters that make guns traceable.

Here in Jamaica, there is just not enough honesty regarding the guns that have been here since the 1970s and 1980s. Furthermore, I am tired of the grand narratives about missing fathers, when in many of the hotspots, the young 'shottas' were well-coached by their fathers who passed on their trade to them. Many of these fathers were facilitated by paternalistic politicians who never reclaimed the guns they distributed. Truth is, Jamaican politicians did help to undermine the legitimacy of the police.

On the other hand, centuries of oppression were focused through a police force given the mandate from 1867 to the 1960s to brutalise dark-skinned Jamaicans. Then, as we grabbed our democracy for ourselves, in the 1970s, we gave them the Suppression of Crime Act, which threw humanity and their rights out the window. It is no coincidence that in the 1960s, while Jamaican cops were violating Rastafari and ghetto youths, American cops were trying to push back Martin Luther King and other civil-rights activists behind the colour line.

As Peter Tosh popularised, there is a strong correlation between equal rights and justice on the one hand and peace on the other. People will fight the State when they are believed to be marginalised.

The murder of law-enforcement officers anywhere is always an attack on society itself and cannot be tolerated. Moreover, as in these recent killings in the USA, when Jamaican police officers are killed, it is usually when they are not actively engaging criminals in firefights. On the contrary, they are targeted and sniped.

Nonetheless, there are important lessons to be learnt from Jamaica. On the whole, despite the pockets of criminal resistance and direct threats against police personnel, the number of attacks against the police in this country has been trending down since 2010. This is not only because of the fact that the criminals are quietly getting the message that the majority of murderers and shottas get caught. Rather, it is also because the police are paying greater attention to use-of-force protocols, as well as better treatment of the public in routine police stops and spot checks.

America does not have a universal use-of-force policy that is compatible with United Nations standards, and it has led to a continuing pattern of human rights abuse, including fatal incidents, which have steadily increased in recent years. In the absence of an INDECOM to support the work of the Internal Affairs Divisions, American police will continue to violate the rights of its citizens, especially young black men - and they will fight back.

In the last two quarters, inasmuch as we have seen an increase in homicides over 2015, there has been both an increase in the number and percentage of arrests as well as a 50 per cent decline in police killing of civilians. Yet, one must be careful to note that both INDECOM and the internal police investigators agree that the majority of Jamaican police killings are not extrajudicial executions. Jamaicans are also showing more trust in their cops than a decade ago.

Going forward, we have to recognise that keeping guns out of the hands of potential murderers is paramount despite the number of non-gun homicides increasing in recent times. However, the propensity to commit violent crimes is directly associated with the swiftness and fairness of justice.

Around 70 per cent of African-Americans believe that the justice system is unfair. White Americans report only 17 per cent. Despite our shortcomings, only 47 per cent of Jamaicans share this view. For almost 14,000 Americans killed in the last 15 years by police, there have been fewer than 100 arrests and even fewer convictions. Proportionally, those numbers are worse than Jamaica's.

Like us, the USA needs to recognise that it has a problem. Denying it won't fix it. At least we are confronting ours.