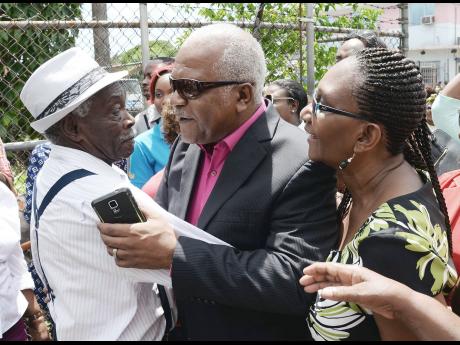 Jermaine Barnaby
Al Miller is greeted by Bishop Norman Salmon outside the Kingston and St Andrew Parish Court on Thursday after Miller was fined $1 million for attempting to pervert the course of justice.

What is the $1-million question? Well, give me 12 months and I will attempt to answer it. Thank God that despite another of his bad public decisions, the Reverend Al Miller has escaped a custodial sentence for his failed attempt to help a famous individual elude apprehension by the police.

In an epic that borders on a hybrid of Transporter, starring Jason Statham, and Driving Miss Daisy, starring Morgan Freeman, the man of the cloth and perhaps many more, on seeing the roadblocks, found himself in more hot water than a land crab.

Details of the offence are still disputed despite the trial. However, in essence, Christopher 'Dudus' Coke, reputed don of Tivoli, was contacted by the man of God to assist him in reaching the United States Embassy in Kingston. Strange, but known only to him, it appears, the embassy was supposed to have been well-informed, and, indeed, has flatly denied that there was some agreement for him to be delivered there.

It should be noted that the embassy is foreign property, a fact sometimes forgotten by our legal luminaries in government, and getting Coke inside the embassy, which was closed at the time, would have been sending him to another country.

Moreover, the Police High Command was also allegedly in on the action, but asked three times, Simon Peter, the rock upon which Miller's case depended, denied him thrice. Thankfully, Miller was arrested for attempting to pervert the course of justice and not under the Dangerous Drugs Act and charged for taking steps to export coke.

Now, clearly, someone was lying, but sometimes we can take things as gospel, even when they are not in the Bible. After all, I bet you would be surprised that the Good Book says nothing about Jesus being in the Garden of Gethsemane. It mentions that town but says nothing about him praying in the garden.

Anyway, it is not unexpected that the embassy would deny any involvement in such a plot because it has never admittedly interfered in our internal law enforcement or done any covert work in Jamaica.

However, I am totally incredulous that the big khaki suit men at Old Hope Road would be so flaccid and pusillanimous that they would think themselves incapable of protecting Coke, who reasonably felt that he was likely to be killed by members of the Jamaica Constabulary Force (JCF).

True, it is a well-deserved reputation because there have been incidents where any logical person would think that trigger-fingered Office Dibble has ended the lives of wanted men in violation of use-of-force policy. But more puzzling is why the High Command would tell Miller that it is acceptable for him to totally ignore the JCF's own warrant and shuttle him to the embassy? The stories are as misaligned as the front teeth of a child who sucks her finger.

Nevertheless, the man who has Jesus on speed dial knows that God sees all, but he must also have been smart enough to believe that the police would have been tracking him. Doubtless, the evangelical message is, 'Follow me!' and, of course, the scriptures say in Romans 14:13, "Therefore, let us not judge one another anymore, but rather determine this - not to put an obstacle or a stumbling block in a brother's way." But the police did not heed the word in Isaiah 57:14: "Build up, build up, prepare the way, remove every obstacle out of the way of my people," and set up roadblocks they did.

Now, perhaps Miller has experience in rally or defensive driving, but as his passenger found out earlier, it is extremely difficult, if not impossible, to outrun the long arm of the law, especially when they have you under surveillance. Yes, Miller read Jeremiah 51:6, "Flee from Babylon! Run for your lives!" but there is also scripture that says that Christians are not a law unto themselves.

There is a certain kind of egotistical and endocentric arrogance among religious zealots, including Christians, where they often think that their way is the only way. It is like when Pastor Brown decides to have a crusade smack in the middle of the week and is blaring his exhortations in defiance of the Noise Abatement Act. Similarly, despite the Road Traffic Act, many men of the cloth raise the wrath of their neighbours by blocking traffic to facilitate passage to or from their services. Not to mention those denominations that persecute you because you 'are not finding time for the Lord', simply because your convenient Saturday or Sunday afternoon is your rest period after your own private worship.

It is Jesus who, in Matthew 7:12, warned, "... [I]n everything, do to others what you would have them do to you ... ." Many Christians follow their own egos and try to make themselves heroic figures and even martyrs. Nothing in self-glorification uplifts the Lord.

Unless the law is unjust, obedience of man's law is non-negotiable. Romans 13 is very explicit: "Let everyone be subject to the governing authorities, for there is no authority except that which God has established ... ." Replicated in 1 Peter 2:13-14, the message is, "Submit yourselves for the Lord's sake to every human authority: whether to the emperor, as the supreme authority, or to governors, who are sent by him to punish those who do wrong and to commend those who do right."

Perhaps because I am not a pastor, I do not understand Miller's course of action. But neither would I bless a partisan political campaign or leave my firearm - if I had one - in my car to pick any kind of plum.

Miller made a gamble and dash for glory and lost. He knew the consequences but took the chance. Thus, as 1 Peter 2 states, "... whoever rebels against the authority is rebelling against what God has instituted, and those who do so will bring judgment on themselves. ... Therefore, it is necessary to submit to the authorities, not only because of possible punishment but also as a matter of conscience."

I hope Miller is better at the core functions as pastor. By the way, would a less-famous person get off so lightly?

- Dr Orville Taylor, senior lecturer in sociology at the UWI and a radio talk-show host, is the author of 'Broken Promises, Hearts and Pockets'. Email feedback to columns@gleanerjm.com and  tayloronblackline@hotmail.com.