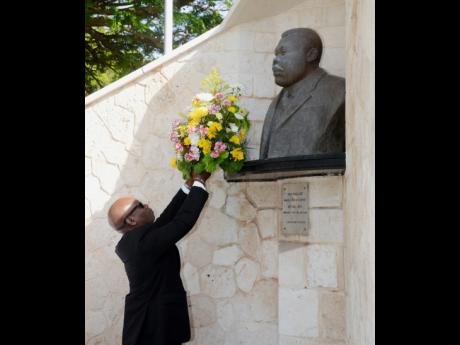 JIS
In this 2012 Gleaner file photo, custos of Kingston, Steadman Fuller, places a floral tribute at the shrine of National Hero Marcus Garvey, at the National Heroes Park, Kingston.

On the eve of National Heroes Day, I attempted to grab a little black cat that was on my veranda, but somehow, I was not as much a star as I thought, and the little puss escaped and scratched me. The sex of the feline is uncertain, but hopefully, it was female because after all, gender always trumps other social statuses.

You might have thought that this was a discourse about the billionaire who is an embarrassment to his party and who gives a different interpretation to the expression 'skirting around the issue' as he masterly debated with himself instead of his female counterpart. And you are probably right. However, at a time when we celebrate our heroic figures, including a legendary woman, we need to look past immediate news-grabbing hysteria and see things for what they are.

The problem with history is that hardly anyone makes connections among events across time and countries. So, for example, for the last decade, we have been pushing the American government to pardon and possibly expunge the records of our first national hero, Marcus Mosiah Garvey. This great black man, second only to Jesus as the most influential 'darkie' who trod the Earth, was convicted in 1923 for mail fraud. Nothing tells me that Garvey had criminal intent, but the naked truth is that most lawyers would agree that he technically did it, being led by his naÔvetÈ.

Nonetheless, we in Jamaica convicted him for daring to propose a higher level of scrutiny for our judges. He merely put forward in Plank 10 of the 1929 Manifest of his People's Political Party (PPP) that judges who, "with disregard for British justice and constitutional rights, dealt unfairly", should be impeached and imprisoned. For this he was charged and convicted of seditious libel and sent to prison. How dare the little black man on his own island question the sagacity and integrity of the ruling colonial class of Britons who themselves wrote the laws and administered them!

This regularly overlooked fact means that the ruling classes always make laws to suit and protect themselves, and despite 'democracy' and 'universal adult suffrage', laws have not yet fully evolved to be truly egalitarian. Monied people and stars with money get away with lots of things. And Garvey might have fingered the judges as a class, but he didn't put his hand on any of them. Only a criminal society could have even thought of the trumped-up charges Garvey was convicted of.

Finally, after decades of activism, including at least 12 years of my asking in these columns for his conviction to be fully expunged, Justice Minister Delroy Chuck has announced that Garvey, as well as other national heroes, with criminal records, is going to have his criminality reversed.

Now tell me, what level of unused brain capacity was dedicated to the failure to notice that George William Gordon and Paul Bogle were also convicted felons? Indeed, in 1865, Bogle went from Stony Gut to the Morant Bay Courthouse to protest and advocate the amelioration of life for the poor and was pushed into a fight, which ultimately became bloody.

Gordon did nothing except criticise his fellow legislators. He did not conspire to subvert any authority and certainly did not advocate or perpetrate the murder of anyone. Not even did he attempt to hide Bogle or dress him in a wig and conceal him in the back seat of his buggy. Yet he was a martyr.

For the record, has everyone forgotten Samuel Sharpe, who, in 1831, led the famous Christmas Rebellion and was later hanged for his efforts? He might have been a 'slave' and not a human within the confines of Her Majesty's laws, but I imagine that the criminal code under which he was executed needed to have labelled him a criminal, too. So, where is his pardon or exoneration?

Freedom fighters who rebel against unjust societies and laws are not criminals and should be restituted as soon as history absolves them.

The whole world knows that I am a strong Garveyian, but fair is fair. Garvey's potential pardon by a foreign nation is for his lack of business acuity and swallowing bait set by his detractors. We sent him to prison and created a fictional 'Bagawire' to take the fall for the shame we should have faced for incarcerating a truth-seeker. Thus, if we want to impress the Americans, we must first bleach our records with a stronger substance than the World Boss used to lighten his skin.

It is not unusual for Americans to pardon freedom fighters. For example, Hillary Clinton's running mate, Virginia Governor Tim Kaine, in 2007, posthumously pardoned enslaved African Gabriel Prosser, who led an unsuccessful revolt in 1800. Prosser and 34 other collaborators were hanged after two informer slaves betrayed them.

America is still struggling with the petition to exonerate Nat Turner, who, four months before Sharpe, led the bloodiest slave uprising in America, killing more than 50 white planters, overseers, and their families. The refusal to pardon Turner is an indication that America still has work to do in becoming a just society.

As we grope through history, our small writing hands take us back to Trump. Rich men like Trump wrote American laws and the constitution. Tax loopholes that would swallow up his diction and mannerism were created by powerful 'star' white men who denied their wives, mothers, and sisters the right to vote until 1920 and black people until 1966.

Yet, the sad thing is that this society, for all its talk about gender equality, has only 19 per cent female representation in Congress and is ranked 73rd in gender equality globally and yet to elect a female president or vice president.

Even sadder, few seem to notice that Trump's operative words were "they let you do it". Even law-school dropouts know that that implies consent and not assault. Therefore, it also speaks to the state of mind of women who allow and accept such boorish behaviour because they, too, are part of the historical culture that socialised them.

Let's open our minds and learn to see in the dark like the big cats - and little ones, too.