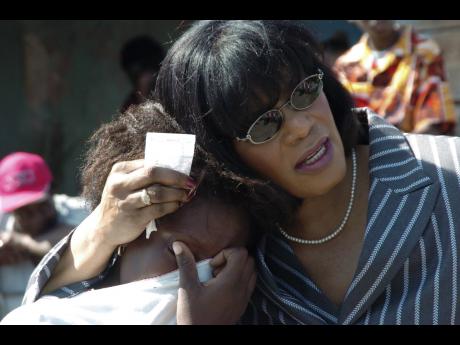 I loved Portia Simpson from the first time she stepped into the Ministry of Labour in 1989, in her elegant garb and her bang hairstyle. Nothing has changed since that day.

We had suffered the indignity of a J.A.G. Smith II, who completely defaced the name of his history-making father with his arrogance without substance. A man who thought so much of himself that he would not typically allow the ministry staff to ride in the same elevator with him, he even believed that the farmworkers' savings were his.

Thus, we were not surprised that apart from passing gas and two deeply offensive labour statutes, his legacy was being called to the prison bar unlike his father, whose Bar was Gray's Inn.

For me, it was personal. We knew of Portia as the firebrand, tough, 'bad-girl' politician in one of the roughest parts of Kingston. In hindsight, sort of like a Nanny of the Maroons, the only thing she had not done was to catch bullets in a mythical way.

Moreover, with her non-middle class accent and deep affinity for the inner city, she was the standard-bearer of the working class. As a boy born in a politically diverse one-bathroom, one-kitchen and a communal standpipe tenement yard in Compound, Waterhouse, I easily identified with her.

Raised in the garrison of Brooke Valley at the foothills of Duhaney Park, I truly understood what it was like to be a 'ghetto' product dealing with the dialectics of struggling to maintain one's roots while gaining respect and intellectual parity in the middle classes.

With a surprisingly disarming smile and penchant for hugs and kisses, Portia made everyone feel as if they mattered. And it paid dividends, because many of us worked assiduously, to make it easy for her as she rode into her role with training wheels still affixed. Her minister of state, Donald 'Danny Buck' Buchanan, was the de facto minister in sensitive labour matters in the first year, and we headed to the International Labour Organisation (ILO) conference in 1990. As director with responsibility for the ministry's compliance with the ILO's standards, I was forced, all by myself, to answer all questions regarding the government's failure to fill the gaps in labour statute and policy.

You can make a judgement as to how the matter was handled, but over the next four years as she grew in stature, she felt the 'collective responsibility', and lots of wind was beneath her wings. Many things happened in the ministry. The overseas employment programme increased in size and numbers, the National Insurance Scheme fund was tailored and invested to massive proportions, and I remember spearheading a request for a day-care centre for workers' children.

During the 1990s, when there was a common misconception that public servants were 'duncer' than their private-sector counterparts, it was personal for me, who doubled as a part-time university academic, that our workers become more qualified.

True, the permanent secretary, Tony Irons, had only the degrees on his thermometer, but the idea of Sista P having her own and not just directors with master's was exciting. Rex Nettleford, Edwin Jones and another smaller set of us were in the position to judge her ability to do the work and she gained her degree from the Union Institute.

Portia was full of promise, and we expected much of her. Contrary to common sentiment that the public was hard on her because she is a woman, she actually benefited from chivalry, because many of the things people did for her and the concessions made in making her work easier was actually because of her sex. We today still privilege women bosses because they remind us of our mothers whom we love. This happens especially if the man who sat in the chair before her was an ass.

Failing in 1992 to best P.J. Patterson in the run-off to replace Michael 'Joshua' Manley, she took on a larger target in 2006 and ran rings around Peter Phillips. When she took the helm, I was, and still am, one of those who were deeply offended that she should have been selected because, "Is woman time!" That's an insult. Because if Sista P were selected based on her sex only, she was destined to fail, since there was no consideration for her ability to unite her party, unite the country, and perform the developmental tasks, building on the party's legacy which was established by her forerunners.

Portia was the hope of the working class - and working-class women, in particular. They say it takes cash to care, but there were many legislative and policy initiatives that I held my breath for and waited to exhale. Indeed, it was woman time and the 1975 Equal Pay for Men and Women Act, from the Michael era, has more holes in it than my high-school shoes, some 41 years later.

The Maternity Leave Act of 1979 is as stale as some of the empty catchphrases used on campaign trails and the sexual-harassment legislation, which I recall first raising in discussions in 1990, is as missing as an explanation for the $600-million pre-Christmas work project.

Two critical amendments to the Labour Relations and Industrial Disputes Act and the Employment Termination and Redundancy Payment Act were overdue from as far back as 1985, and these I tried to push since then. How does she feel that it took a Jamaica Labour Party administration to pass them in 2008 and 2010? Since 2000, the enfranchisement of contract workers, especially security guards, has never left my agenda.

True, she finally woke up and brought in Peter Phillips and gave him full rein over the economy. To their credit, the economy and its stewardship got the best approval rating from the International Monetary Fund (IMF) since our first agreement in 1977. But I ask, which laws and policies did Portia push for the overall uplift of the working poor whom she loves so much? This is how you measure the legacy of a political leader's tenure. Did her inner circle of 'advisers' keep this in mind as they massaged, apologised for and unnecessarily shielded her?

You make the judgement, because for the past decade in this column and in my 2014-15 book, Broken Promises, Hearts and Pockets: A Century of Betrayal of the Jamaican Working Class, I have begged her to cement her legacy in a form that even her worst detractors could not ignore. Hopefully, in retirement, she will sit and read them.

- Dr Orville Taylor is senior lecturer in sociology at the UWI, a radio talk-show host, and author of 'Broken Promises, Hearts and Pockets'. Email feedback to columns@gleanerjm.com tayloronblackline@hotmail.com.