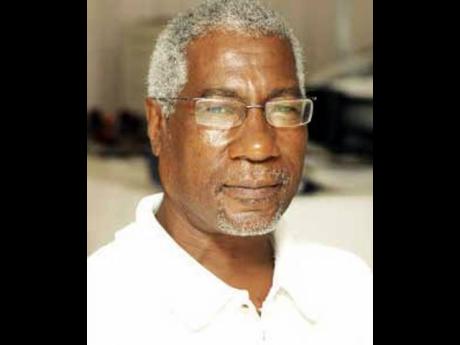 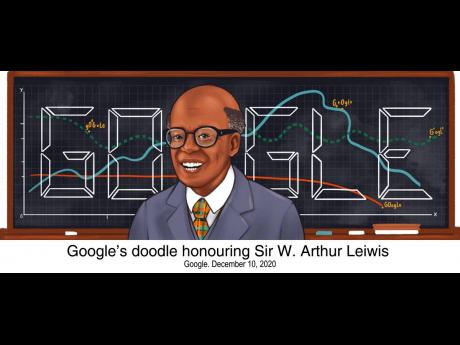 Contributed
Google’s December 10, 2020 ‘Doodle’ honouring Sir W. Arthur Lewis as an ‘economist, professor and author, considered one of the pioneers in the field of modern development economics’ is by Manchester-based guest artist Camilla Ru. 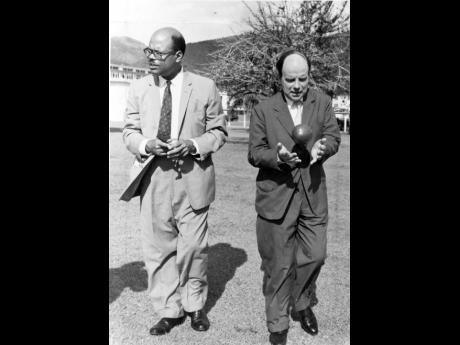 The Gleaner Archives
In this June 1960 photograph, Sir Dr Arthur Lewis (left) walks with Main Macleod, secretary of state for the Colonies, who is seen playing with a calabash which had been picked from the tree in the background.
1
2
3

In this week’s REPARATION CONVERSATIONS, a partnership between The Gleaner and the UWI’s Centre for Reparation Research (CRR), Earl Bousquet highlights the life and contribution of Nobel Laureate, Sir Arthur Lewis. The article coincides with the anniversary of the birth of Sir Arthur, now regarded by those who have now discovered his ideas in his 1939 book, Labour in the West Indies, as among the earliest proponents of Reparations for the former West Indies for Britain’s colonial wrongs.

“What claim have the West Indies to demand such sacrifices from the British people? Briefly this. It is the British who, by their action in past centuries, are responsible for the presence in these islands of the majority of their inhabitants, whose ancestors as slaves contributed millions to the wealth of Great Britain, a debt which the British have yet to repay.”

So said W. Arthur Lewis, a unique Caribbean man of multinational and multidimensional character, who would have turned 106 this year.

Born in Saint Lucia on January 23, 1915, he won a government scholarship at age 17 and proceeded to the London School of Economics (LSE) in 1932, quickly earning a Doctorate in Industrial Economics.

In 1939, he penned his first book, Labour in the West Indies, followed by a number of others on labour and economics that earned his worldwide reputation as a respected scholar.

But Lewis’ long and positive academic tenure in Britain also featured decades of institutional discrimination for his ceaseless advocacy for independence for the then British West Indies.

He was also a major critic of the UK’s refusal to implement a post-World War II economic plan for its Caribbean colonies akin to Europe’s ‘Marshall Plan’ and the UK’s ‘Colombo Plan for East India’ launched in Sri Lanka in 1951.

Frustrated by London’s insistence on ignoring its Caribbean colonies, Lewis sought to lend and apply his talents in places and ways that would eventually allow him to better serve the region from whence he came.

Lewis served as economic adviser to the new governments of Ghana, Nigeria, and Tanzania and contributed to Ghana’s first National Economic Plan launched by President Kwame Nkrumah in 1964. vice chancellor of The University of the West Indies (UWI) and was also the first chancellor of the University of Guyana (1963).

The UWI head publicly identified with early calls by Jamaica’s Rastafarians for ‘Repatriation to Africa’, contextualising it within the legacy of continuing Garvey’s quest for identification by African descendants everywhere with the continental motherland.

By then totally disillusioned by the British, Lewis shifted his international focus once more, this time to the United States, where he quickly cast his name in stone at Princeton University, jointly winning the 1979 Nobel Prize for Economics with Chicago University economist Theodore W. Schultz “for their pioneering research into economic development research with particular consideration of the problems of developing countries”.

But while he was celebrated worldwide as a brilliant economist, Lewis’ very first book was actually the most serious about the Caribbean’s future – and it was not about new economic theories, but a clear outline of Britain’s historic responsibility to pay its centuries-old reparations debt to its former Caribbean colonies.

His best-known book on world economic history and economic development - Economic Development with Unlimited Supplies of Labour – was published in 1954 and is still referred to as ‘his foundational article’.

But, 15 years earlier, Lewis had already penned Labour in the West Indies, the most profound early expression of what would be his lifelong dedication to the cause of ending British colonialism in the Caribbean and demanding reparatory justice for slavery.

Governments of the now-independent former European colonies he agitated for in Britain would adopt – 81 years later – his original 1939 blueprint, to be presented to the European Union (EU) as the prescribed template for the regional economic package valued at US$500 billion being sought by CARICOM for Reparations for Slavery and Native Genocide.

How did that happen? It started after the young Lewis interrupted his lecturing duties in 1938 to tour and study the revolutionary protests in the region arising from flaming-hot demonstrations by workers from Jamaica to British Guiana (now Guyana).

London had appointed the Moyne Commission (also in 1938), which recommended recognition of trade unions, formation of political parties, and introduction of the right to vote, but those proposals were deliberately iced during the six years of World War II (1939-45).

Labour in the West Indies is today cited by CARICOM as the first detailed economic argument for reparations from Britain for slavery in the West Indies, making W. Arthur Lewis the acknowledged Intellectual Author of the First Blueprint for Caribbean Reparations.

The British had, basically, blacklisted Labour in the West Indies (if only by systematically ignoring it), but its contents clearly confirmed that Lewis’ deep anti-colonial political foresight long preceded and transcended his other later academic credentials.

Lewis’ pioneering 1939 contribution to the Caribbean’s Reparations Movement only started coming into full light 74 years later, in 2013, when the region’s 14 governments established the CARICOM Reparations Commission (CRC) to pursue its common quest for reparations from Europe.

The first Sir Arthur Lewis International Symposium (SALIS) – an online event – was co-hosted by the CRC and the Saint Lucia National Reparation Committee on June 16, 2020, the 29th anniversary of his death, during which presenters expounded on different formats of his enduring global legacy.

Sir Arthur’s after-life was highlighted throughout the second half of 2020, especially following the June SALIS virtual event in which UWI Vice Chancellor Sir Hilary Beckles urged academics and politicians, teachers and students, young and old, to explore more deeply the historicity of Lewis’ contribution as the Caribbean’s ‘Father of Reparations’.

Adoption by CARICOM of his Reparations Blueprint on Emancipation Day 2020 (August 1) was a fitting (though belated) tribute to Sir Arthur’s pioneering role.

Four months later, Google dedicated its December 10, 2020, ‘Google Doodle’ edition to Sir Arthur (to commemorate the 41st anniversary of his Nobel Prize) and described him thus:

“A trailblazer not only in his research, he was also the first Black faculty member at the London School of Economics, first Black person to hold a chair in a British university (Manchester University), and the first Black instructor to receive full professorship at Princeton University.”

Those were only some of the stepping stones crossed by W. Arthur Lewis during the long life he lived traversing the world in his tireless and ceaseless search for solutions to its expanding problems before the Caribbean reparations trail and road map he left in the early 20th century were finally adopted by CARICOM governments eight decades later in the 21st century – and 20 years into the Third Millennium.

- Earl Bousquet is chair of the St Lucia National Reparations Committee and member of the CARICOM Reparations Commission (CRC). He is also a network scholar in the CRR. Send feedback to reparation.research@uwimona.edu.jm.