Mark Wignall | The Bible and the badman 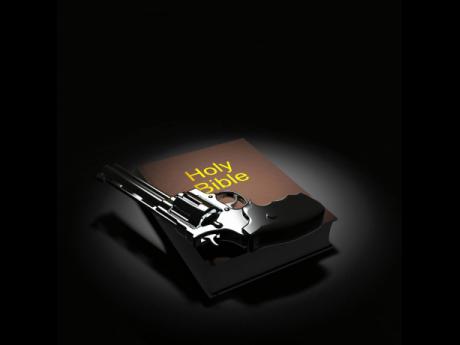 In the mid 1970s, I met a well-known gunman of the time with a lifetime alliance to one of our two political parties. We instantly took a shine to each other, regularly meeting at a nightclub in Cross Roads.

Dreadlocks, broad smile, and handsome man always surrounded by two or three beautiful women. I wanted to get inside of his head, to find out why he did what he did. He wanted long hours of preaching to me about the evils of the ‘other’ party. And then one day I told him, ‘Well, I am an atheist.’

He stayed way from the club for a while. When he returned and began his explanation, I was both amazed and confused as he told me how good God was and how he could never live without the blessing of that same God. Even as he occasionally engaged in mass murder for his political bosses.

They immediately became scared and ran out. It worked because the gunmen feared the ‘wrath of God’. The horrendous shooting death of Mrs Andrea Lowe-Garwood, which took place in a church in Trelawny, comes as a surprise to some. Not that I expected it to happen, but I suspect that the full sociological profile of the gunman in Jamaica has changed since the days of the 1970s.

Certain barriers that were held in the 1970s – no murder of children, elderly, women, and church is sacred and God is real and powerful – are no longer there. To the man who sat behind Mrs Lowe-Garwood and stared at the back of her head, the church was just another place to launch a hit.

With a confluence of most unfortunate events like COVID-19 and the economic devastation of 2020, its continuation in 2021, an explosion of gun-shooting deaths, the murder of Mrs Lowe-Garwood has brought into focus not just more of the same destructive diminution of any goodness left in us, but it has made us into a nation of soulless people.

DO WE REALLY KNOW EACH OTHER?

After the 2001 violent clash between the security forces and gunmen inside Tivoli Gardens in which 27 people died, a group of business leaders were led on a tour of sections of the inner city in downtown Kingston close to the ‘war zone.’

One well-known and highly respected business leader, after viewing the general state of socioeconomic blight and widespread dilapidation, said openly that she had no idea people lived like that. Twenty years have passed, and I suspect, based on the anger level in Jamaica at this time, not many of us are too interested in the opening up of another man’s gate and having a conservation with him.

How much do you take home after taxes? $150,000, $200,000, $500,000? I suspect that if you fall in the general range above, there are many things that you have no need to think about. On the other hand, if you are paid minimum wage and you work just the stipulated 40 hours per week, it will matter to you to know that the first hour’s pay of $175 can purchase a tin of mackerel and a pound of rice.

If you do over nine hours work per day (about 57 hours over six days), obviously, that first hour of $122 will test your inventiveness.

Last Tuesday, I sat with a young woman who has two boys – ages nine and seven. They occupied two bedrooms in a family house and shared an outside kitchen with another family unit. She earned $10,000 for working a 50-hour week.

“So you have $5,000 leave over. Where that go?’ I asked. She told me that before COVID-19 times, the rest would g0 to lunch money even though she got help from PATH. I still think that the remaining $5,000 can’t spread much.

“How yu deal wid all light and water?” I ask her. She wasn’t too anxious to discuss that, so I left it alone.

If an uptown family chomping down on a Sunday dinner of beef tenderloin and mushrooms, asparagus, and wild rice decides to look far over the fence to see that young woman seated with her young boys enjoying their chicken foot stretched with ample gravy and a pound of rice and she could get the chance to even smell the fare of the uptown family, is it at all likely that it would lead to a better understanding of each other?

And if it leads to a better understanding, could that prompt us towards becoming a more peaceful society? What if we gamble wrong and it leads to anger?

Reading about the details of murder of his wives and Beachy Stout, it causes some to ask, how can something so sweet and tender like love get turned into the bitterest of emotions and eventually murder?

Romantic love is a great selfishness, and those rules will never change. I love you. Desire no one else!

Many men are weak, but as much as they desire love, they also fear it because it is just about the only emotion that can render them spineless, begging and afraid to face their tomorrows.

Most men do not handle themselves very well when the woman ushers him out the backdoor. The weak man is certain that soon, she’ll have an army of lovers. Weaker men are likely to occupy themselves with thoughts of murder.