A delicious night out at Robin’s Prime Steakhouse 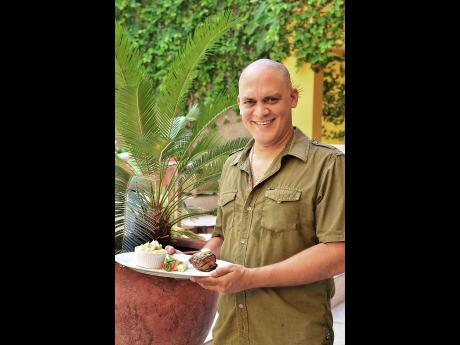 Robin Russell shows off his signature tenderloin steak which will be on special throughout restaurant week.

Treat yourself to a delicious night out at Robin's Prime Steakhouse.

Dining on a perfectly cooked steak is a treat that everyone is deserving of, and nowhere else in the Second City is steak more expertly seasoned and prepared than at Robin's Prime Steakhouse, located at the Altamont West hotel, along Gloucester Avenue, Montego Bay.

Robin Russell, who is the restaurant's owner and executive chef, told Food that a covering of lava rocks are what he uses to give his juicy tenderloins their deliciously smoky flavour. He explains that he uses very few spices in cooking his steaks, which he says are primarily seasoned with salt and pepper, along with a special blend of fresh herbs.

"A lot of persons try to do too much with steak," Russell said. "Here we allow the natural flavour of the steak to come out, there is really no need to overshadow that with extra seasonings," he adds.

Alongside signature steaks, Robin's Prime Steakhouse will also be offering grilled pork chops, grilled chicken breast topped with a tomato feta cheese salad and a shrimp and mushroom pasta on their special menu that will run for the duration of the Gleaner-sponsored Restaurant Week. Sides will include a delicious baked macaroni and cheese, mashed potatoes, steamed veggies and a special herb rice.

A fresh garden salad will also accompany all meals during Restaurant Week, in addition to the three standard courses. Seating will commence at 6 p.m. daily and diners are strongly advised to make reservations ahead of time.