Wicker - The art of Kingston 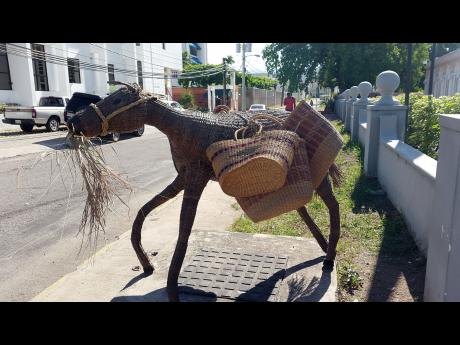 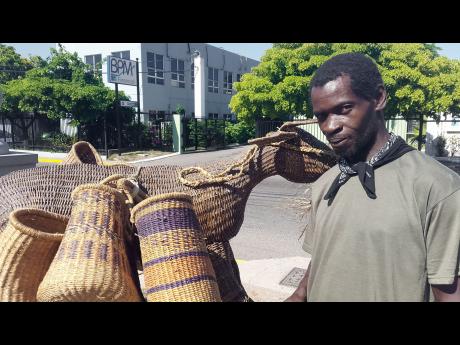 On driving to work recently I noticed from the corner of my eye a wicker donkey with a saddle loaded with wicker baskets and a mouth full of grass. He was just standing on the roadside, on the corner, an unexpected declaration of our heritage and culture against the background of cement and steel and the manic rushing of good citizens on their way to air conditioned offices in the vicinity.
I continued driving, but on reaching my destination I found the image lingering and a curiosity grew. I could not allow the moment to pass or the question to go unanswered. I turned back. On finding myself on the corner with the donkey, there was no one around. I parked and took some pictures and then noticed that there were more wicker items further up the road and some men in close proximity.  I headed in that direction and inquired about the artisan and the items. They quickly called 'the Wickerman' who was actually very near to the donkey - but he now boasted a basket loaded with juice, crisps and other snacks for sale to the occupants of nearby offices.
He hurried over but approached me cautiously, when he saw the camera and was faced with my questioning about his art. I quickly explained that my interest was purely in his skill as an artisan, I was not there to enforce or regulate him. He relaxed and proceeded to give me the following information: His name is Audley Johnson, aka Donovan Wicker. He has been making wicker products for almost 40 years. He turned to wicker as his salvation when as an abused child he ran away from home and was taken in by some men who took the time to teach him the craft. He credits his survival from his own instincts, being April born he says he was "not a tuff head yout", but he is not a fool.  He did not finish school, he ran away in the seventh grade and has been self-employed with wicker ever since. He says he works with integrity, "Mi noh tek nothing from nobady, me work hard fi survive".
He loves working in wicker, but is now tired of the same designs and wants to create more. He works mostly from a book and when he is introduced to new designs he has proven himself capable. He says: "I have seen the business change over the years, hardly anyone working in wicker anymore, not on the scale as it used to be." He recalled when Jamaica used to export wicker in a big way and at that time there were many wicker workers. He harvests his wicker in Portland and has noticed that with the drop in demand there is an excess amount to be had. He showed me his technique which is very similar to the weave used by some African artisans. He agreed and said he had copied the style from a basket given to him. He showed me the grass used and stated that it's common and easily available.
When questioned about the fragility of wicker in the context of other materials such as plastic being used to create the same effect, he responded to say "wicker like other gifts from the earth, needs the right maintenance and care to make it last." He stated that wicker if well maintained will enhance any home; add texture; quality and life to a living environment and will enhance the very air in the home. He indicated that people who purchase wicker, have a love for not just the function of the thing, but for the way it makes you feel. This is why he loves working from his location in the city where his work can be seen and appreciated not just for the functionality but for the aesthetics. So what about cost? Well wicker is not cheap, there is the specialist harvesting with the movement of the moon, the transportation of the materials and the hours of loving craftsmanship. However, as Wickerman says, "When you buy my wicker, it will make you rich in mind and in spirit and enhance the vibration of your home."
Article contributed by Arlene McKenzie, director craft development, Tourism Product Development Company Ltd. Email: Arlene.McKenzie@TPDCo.org