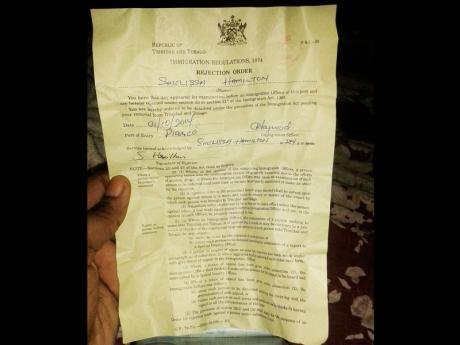 The rejection order handed to Jamaican Shelissa Hamilton after she attempted to enter Trinidad. Contributed

WESTERN BUREAU: Thirteen Jamaicans are claiming they were exposed to extremely cold conditions, forced to sleep on the floor, and deprived of access to food and bathroom facilities at Trinidad's Piarco International Airport last Tuesday night after being denied entry into that Caribbean country.

"We sat, while some of us slept on the floor of the airport for several hours. We had no access to our luggage, and were like trash, like animals," Wayne Mullings, a St Elizabeth-based plumber, told The Gleaner on the weekend.

Mullings said he was on one month's leave from Brent Brothers, the company for which he works, and decided to take a two-week vacation to Trinidad, only to feel like a criminal and be held prisoner on arrival there.

"When we arrived, we all went to Immigration. I had someone meeting me. However, they held on to my passport. While waiting, they asked me how much money I had. I told them US$600. They gave me a piece of yellow paper and told me to sign it, which I refused to sign after reading. They then said they were denying me entry into the country," said Mullings.

Hamilton, who is 19 years old, said her passport was stamped for a six-month stay by an immigration officer, who later called her back after she went through customs and "crossed up" her passport.

"I was going there to visit my aunt who lives there and is married to a Trinidadian and I am not happy about the treatment that was meted out to me," said Hamilton.

For Page, this was his first time on an aircraft and he considers the experience "horrible".

Page said he recently completed the multi-purpose rated course at the Caribbean Maritime Institute and was taking a break because one of his schoolmates was from Trinidad.

"I had no intention of running off in their country. I am the father of three children and had no intention of staying there," he told The Gleaner, upset that he was left hungry, thirsty and cold, without any assistance from the authorities in that country.

According to some of Jamaica's immigration officers, this is a regular occurrence.

"There seems to be no end to the situation. Many persons are turned back daily," one officer told The Gleaner, adding that Jamaicans are spending thousands of dollars on airline tickets only to be sent back.

Goldson, who was invited by a Trinidadian she met in Jamaica two years ago, said she was told by a female immigration officer that she was lying after she was asked how she came by funds to purchase her airline ticket and use as spending cash.

"I told her that I raised chicken and I also worked at a lounge. She responded that she has been to Jamaica before and raising chicken could not pay my airfare," said Goldson.