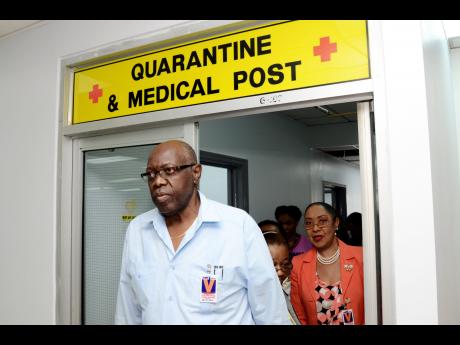 Rudolph Brown/Photographer Dr Fenton Ferguson, Minister of Health and Dr Marion Bullock-Ducasse, director of emergency, disaster management and special services in the health ministry and leaving the medical post at the Norman Manley International Airport on Friday before handing over the hand held temperature scanning machines for Ebola testing to workers at the airport.

Health Minister Dr Fenton Ferguson is heading to Cuba by the middle of this week to seek help to fight the potential threat of the deadly Ebola disease.

?I have met with the Cuban ambassador, and a broad delegation, including the private sector, will

be visiting Cuba to seek support from the government,? Ferguson announced last Friday.

?As we are aware, Cuba sent a mission to West Africa in the response to the Ebola outbreak in that region, and we would like some support from their medical doctors to help with our national response,? added Ferguson as he called for unity in the coordinated response to Ebola.

?While we are going through the chikungunya outbreak, we know that the mortality rate for this disease is less than one per cent, but Ebola is no joke. The Ebola virus is a severe, often fatal illness with a death rate of up to 90 per cent.

?The prime minister has elevated the country?s response to a national health response. We are calling on every citizen of this country to unite around this response,? Ferguson said.

The Government has stepped up its attempts to prevent Ebola from coming to the island, even as steps are taken to prepare state agencies to respond if it does come.

Last Friday, four of the first set of handheld laser temperature machines, donated by Errald Miller, husband of Prime Minister Portia Simpson Miller, were delivered to employees at the Norman Manley International Airport to assist with the screening or arriving visitors.

Similar machines are expected to be in other ports of entry shortly.